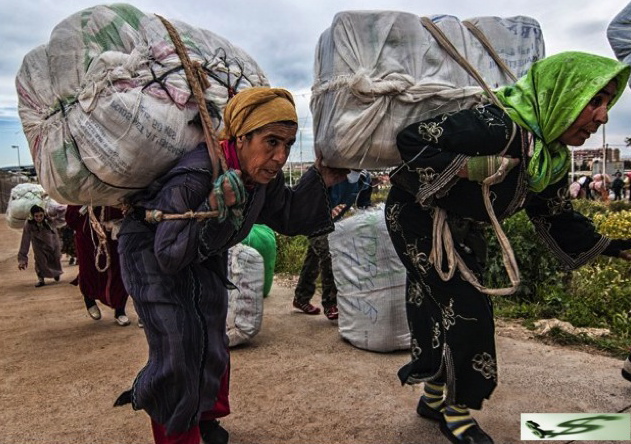 (News) They are known as the mule women of Melilla. Everyday they carry heavy loads across the border between the Spanish enclave and Morocco. Melilla is an important entry point for goods into “North” Africa - and if the women can carry them, they can be imported into Morocco duty-free.

Isaiah 14:31 Howl, O gate; Cry, O City; Babylon The Great is dissolved: for there shall come from the North a smoke,and none shall be alone in the appointed times. 14:32 What shall one then answer the messengers of the Nation? That the Creator has founded Zion, and the Poor of his People shall Trust in it. (Psalms 19)

(News) In the early morning sunlight, a cloud of dust hovers close to the 6m-high fence that separates Melilla from Morocco. The dust is kicked up by frenetic activity as traders prepare goods to cross the border. (Crucifixion is at all the borders one must Cross)

There are second-hand clothes, bolts of fabric, toiletries and household items, all of it destined formarkets in Morocco and beyond. Thousands of people are here and the noise is deafening - a cacophony of revving engines and raised voices.

Massive bales are everywhere, all wrapped in cardboard, cloth and sacking and fastened with tape and rope. And under the immense bales, obscured and bent double by the size of their loads, are Moroccan women. They are the mule women of Melilla, known locally as porteadoras.

This commerce takes place daily at Barrio Chino - a border crossing from Melilla to Morocco for pedestrians only. As long as a porteadora can physically carry her load, it is classed as personal luggage, so Morocco lets it in duty-free.

The women have the right to visit Melilla because they live in the Moroccan province of Nador. But they are not allowed to reside in the Spanish territory.

Latifa claims her place in one of the rowdy queues made up of hundreds of women, and drops her load of 60kg (132lb) of used clothes. She has been doing this work for “24 Years” and will be paid three Euros ($4.10 or £2.60) for transporting her bale across to Morocco. It is not work she chooses to do.

Life is difficult for them in Morocco's Traditional Society, and often this is the only work they can get. Some of them make three or four trips a day from Barrio Chino, carrying up to 80kg. Rates of pay vary and the women complain they must give bribes to the Moroccan guards.

"I have family who must eat," she explains. "I have four children, and no husband to help - I divorced him because he beat me." And then as the queue surges forward, Latifa disappears in a Sea of Merchandise.

Revelation 21:1 And I saw a New Heaven and a New Earth: for the first heaven and the first earth werepassed away; and there was no more Sea of Merchandise.

(Spirit of Truth) Give praise to Wisdom born of Mother Earth, for it is in Wisdom that all Life Exists and not through the “Tree of Knowledge of Good and Evil” (Education) that Eve bowed to.

By worshipping a dead Evergreen Tree (cut down for Christmas) a Child was suffocated by its mother and given to the World as the birth of Life.

Mary gave birth to J, a stillborn Jesus, who would be known as Lazarus and whom the living Cry’ist brought to Life by becoming a sacrifice on the dead Tree.

The Tree, which is (Good) made into dead wood, to become (Evil), embedded into rock (Rockefeller Center) to be worshipped in the big “Apple”.

Habakkuk 2:19 Woe unto them that says to the Wood, awake; to the dumb (stone) Rock, arise, it shall teach! Behold, it is laid over with gold and silver, and there is no breath at all in the midst of it. 2:20 But the Creator is in his Holy Temple: let all the Earth keep Silent before Him.

(Spirit of Truth) Under-standing leads to the undertaker, while spiritual Wisdom, leads to Over-standing which is the resurrection from the grave, and it is only those that are of this order who will see the light.

I am sharing another link for the above Revelation in its fullness, not on the Social Networks but where we are made one in Spirit by visiting and leaving without anyone knowing that you have been there.