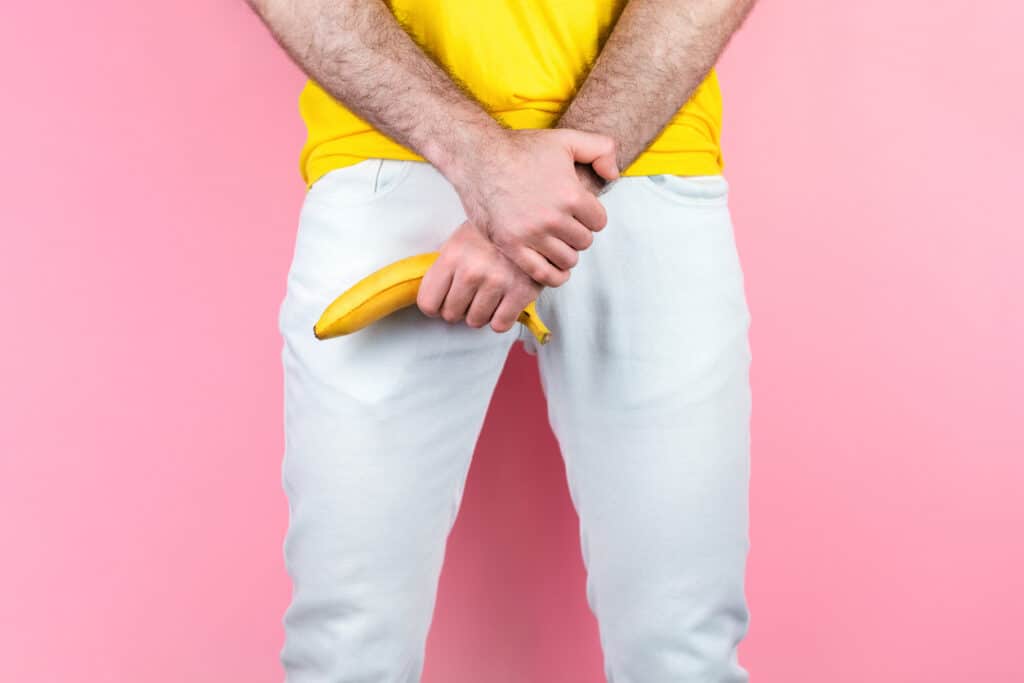 Potency and men’s health. A man in white jeans, legs apart, holds a banana near the genitals. Pink background. Close up of hands.

There are certain foods that are recommended for men to consume to support sexual health, erection strength, and sperm motility, according to researchers, per Blackdoctors.org

The outlet has listed 25 foods that are said to be essential nutrients for the penis and have “demonstrated positive effects on very specific aspects of penile performance,” per the report.

Check out the list of 25 of the best foods for the penis below.

1.) Bananas
Hard men have healthy hearts, so eat bananas for potassium, which is great for your heart and circulation. Getting enough potassium helps keep your sodium levels under control, stopping your blood pressure from hitting the roof and reducing your risk of heart problems. If you eat too much salt and don’t like bananas, get your potassium from oranges or jacket potatoes (the mineral’s in the skin).

2.) Spinach
Eating spinach, a green rich in appetite-suppressing compounds, can not only make you look better naked but increase blood flow below the belt.

3.) Coffee
Recent University of Texas findings suggest that men who drink two to three cups of java a day—or 85 to 170 milligrams of caffeine from other beverages—are 42 percent less likely to have erectile dysfunction than those who consume up to seven milligrams of the stimulant daily

4.) Tomatoes
Men who eat over 10 servings of tomatoes each week have an 18 percent lower risk of developing prostate cancer — the result of lycopene, an antioxidant that fights off toxins that can cause DNA and cell damage, a study in the journal Cancer Epidemiology, Biomarkers and Prevention found.

5. Hot Sauce
Want it hot and spicy in the bedroom? Eat a little spice. A recent study from France found men who have a taste for spicy foods tend to have higher testosterone levels than those who can’t handle the heat.

6. Watermelon
Watermelon is one of the richest natural sources of L-citrulline, an amino acid that can help make your erection harder. Once it’s in the body, it converts to L-arginine, stimulating the production of nitric oxide, which increases blood flow to the penis, strengthening erections.

7. Ginger
According to a study in the International Journal of Cardiology, consuming a mere teaspoon of the stuff a few times a week is all you need to reap the heart-healthy benefits. The spice has also been shown to boost levels of testosterone and sperm viability.

9. Green Tea
The brew is rich in compounds called catechins, which have been shown to blast away belly fat and speed the liver’s capacity for turning fat into energy. But that’s not all: Catechins also boost desire by
promoting blood flow to your nether region.

10. Dark Chocolate
Cacao increases levels of the mood-boosting hormone serotonin, which can lower stress levels, boosting desire and making it easier to reach orgasm. And that’s not all: Cocoa also increases blood flow through the arteries and relaxes blood vessels, sending blood to all the right regions, which can boost sexual pleasure.

11. Oatmeal
The popular breakfast cereal is a good source of l-arginine, an amino acid commonly used to treat erectile dysfunction.

12. Pine Nuts
These underrated kernels are rich in zinc, and people with higher levels in their system have been shown to have a higher sex drive than those with lower levels13. Cherries

13. Cherries
Cherries are rich in anthocyanins, plant chemicals that clean your arteries of plaque, keeping them open for business. That has a direct effect on blood flow below the belt.

14. Wine
Not to be confused with the overconsumption of alcohol that puts your libido in reverse, if you’re looking for a way to simultaneously boost your libido and calm those pre-date jitters, pour yourself a glass of red wine. According to a study printed in Nutrition Journal, a little red wine could elevate your testosterone levels.

16. Salmon
It’s no secret that oily cold water fish like wild salmon, sardines, and tuna are overflowing with omega-3 fatty acids, but here’s something you may not know: The nutrient not only benefits your heart but also raises dopamine levels in the brain. This spike in dopamine improves circulation and blood flow, triggering arousal.

17. Brazil Nuts
Selenium is a trace mineral found in Brazil nuts that plays an important role in hormone health. You only need a tiny bit for healthy sperm, but a tiny deficiency can be catastrophic for reproductive health.

18. Potatoes
Potatoes—whether they’re the white or the sweet variety—are a great source of potassium. This nutrient boosts circulation, which keeps blood flowing where it needs to go and boosts your bedroom pleasure

19. Maca
Ancient Incans consumed this energizing Peruvian plant before battle or a bout of sex, says Chris Kilham, an ethnobotanist at the University of Massachusetts at Amherst. Maca increases sexual appetite, stamina, endurance and fertility.

20. Carrots
A study published in the journal Fertility and Sterility that analyzed the effect of various fruit and vegetables on sperm quality discovered carrots had the best all-round results on sperm count and motility.

21. Serrano Chilles
A recent study by French researchers found that men who eat the spiciest foods tend to have higher testosterone levels than those with milder palates.

22. Pumpkin Seeds
Pumpkin seeds are one of the best dietary sources of zinc and magnesium—essential minerals are shown to boost testosterone levels and growth factor hormone, especially when combined.

23. Chicken Breast
In addition to a large amount of arginine, a 3-ounce cooked chicken breast contains only 142 calories and 3 grams of fat, but an impressive 26 grams of protein. That’s more than half of the day’s recommended allowance. Plus, it’s rich in B vitamins to rev your metabolism and energy levels.

24. Celery
Celery contains androsterone, a male sex pheromone released through perspiration, which limited research has shown to increase flirty behavior among females. Ingesting the androsterone can also boost male arousal, and cause a man’s body to send off scents and signals that make him more desirable to women. Celery is also high in water content and great for detoxing your body, so it’s an all-around great tool for inside and outside the bedroom.

25. Liver
You’d be hard-pressed to find a less sexy-sounding food, but liver is loaded with zinc, which is essential for keeping testosterone levels up and prevents your body from converting T into estrogen.

Eat p****, that will support your health