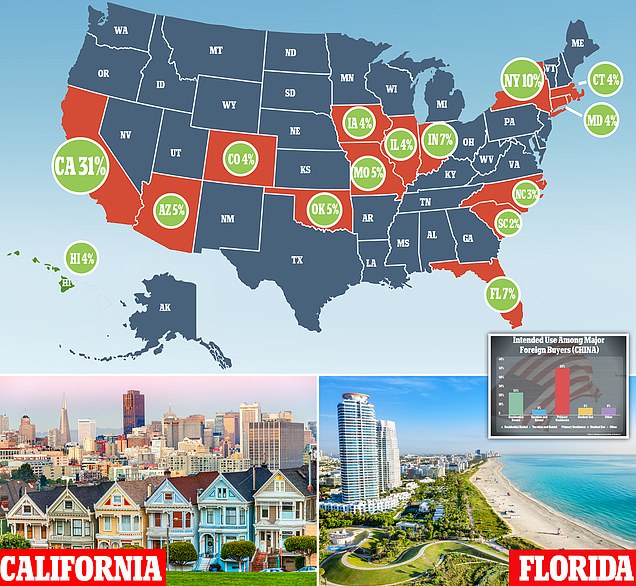 California and New York are the most popular of 15 US states where Chinese buyers are purchasing property after other countries forced them out for driving up the housing market.

Chinese investors bought $6.1billion worth of property in the US between April 2021 to April 2022, a report by The National Association of Realtors (NAR) revealed.

Florida ties with Indiana for the third hottest pick with the Chinese. Florida Governor Ron DeSantis, 43, called a 'huge problem.'

'I don't think they should be able to do it. I think the problem is these companies have ties to the CCP, and it's not always apparent on the face of whatever a company is doing,' he told Fox News' Laura Ingraham earlier this week.

But a report by the Wharton School of Business at the University of Pennsylvania says the real reason for the purchases is often more mundane - to avoid paying taxes in China.

The Sunshine State reached its 14th consecutive year as the top pick for foreign buyers.

DeSantis shares similar views to countries, such as New Zealand, Australia, and Canada, which have imposed taxes on foreigner buyers purchasing property.

New Zealand, where Chinese investment has been blamed for a huge spike in home property prices, now charges a 15 percent tax to non-resident buyers. Australia imposes a 12.6 percent tax on any foreign buyer purchasing a home valued higher than $750,000 and have been since 2017. And in Canada, the government takes 50 percent of any sale as a withholding tax.

The US, however, does not impose tax restraints on foreign buyers, according to the Wharton Business Journal of UPenn.

Around half of all properties that foreigners buy are used as primary residences, with the remainder used as vacation homes, second homes or a pied-a-terre that the owner will occasionally visit.

Data from the National Association of Realtors further showed that 58 per cent of Chinese buyers paid for their American properties entirely with cash.

The same survey showed that 52 per cent of Chinese people intend to use their US homes as a primary residence - with a further 25 per cent using it as a vacation rental. Meanwhile, the most popular type of property for Chinese buyers were detached single family homes, with 66 per cent opting for a house like that.

Roughly one in ten preferred townhouses, with the same figure favoring condominiums. 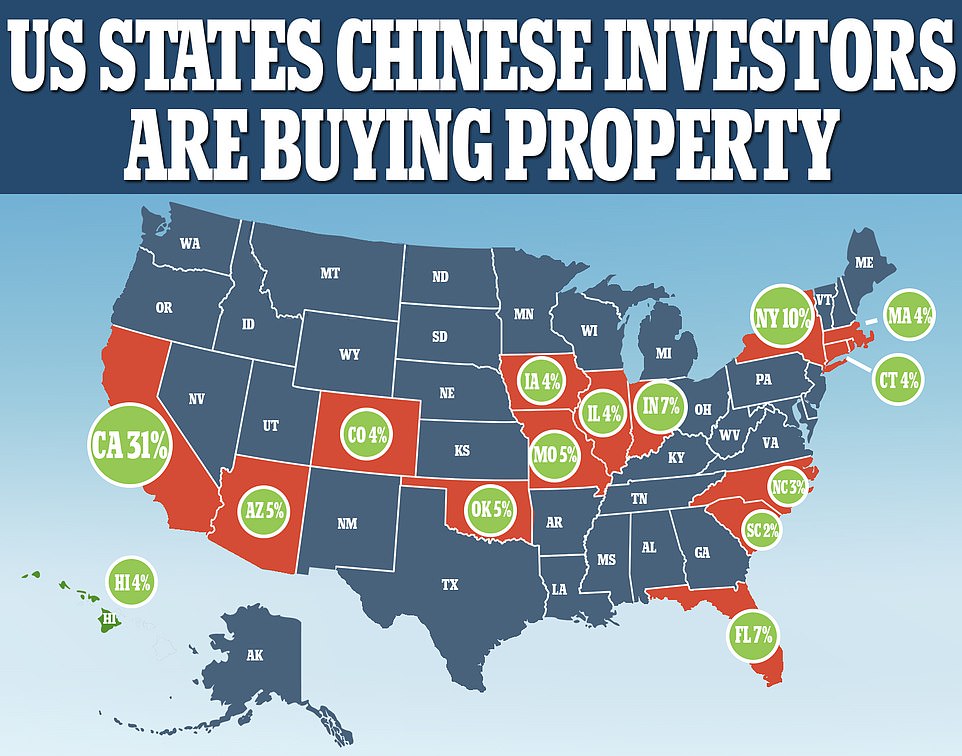 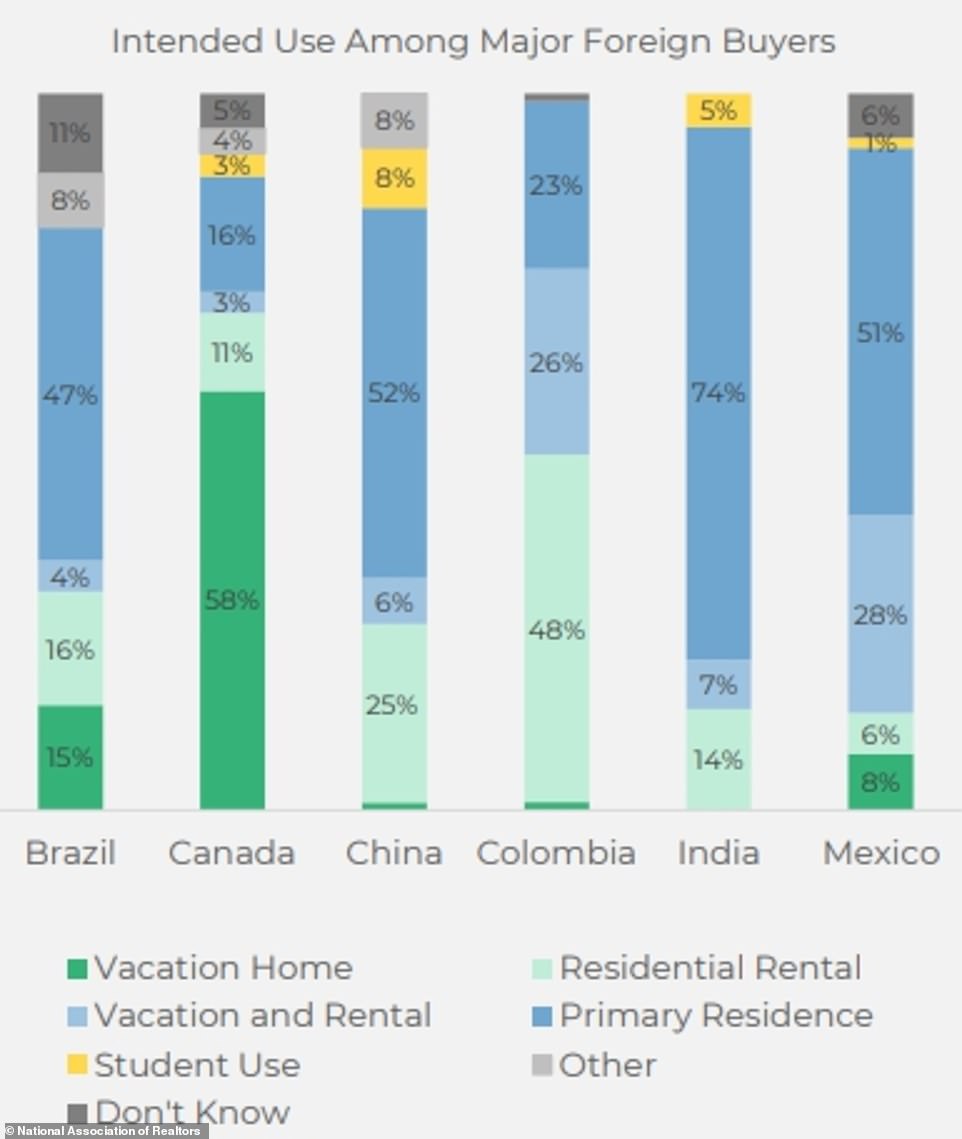 A chart from the National Association of Realtors shows that the vast majority of Chinese buyers of US property - 58 per cent - say they plan to use their purchase as their primary residence, while another quarter say it was bought as a vacation rental

Another chart from the NAR showed that two thirds of Chinese buyers favored detached single family homes, with nine per cent favoring townhouses, and another 10 per cent opting for a condo 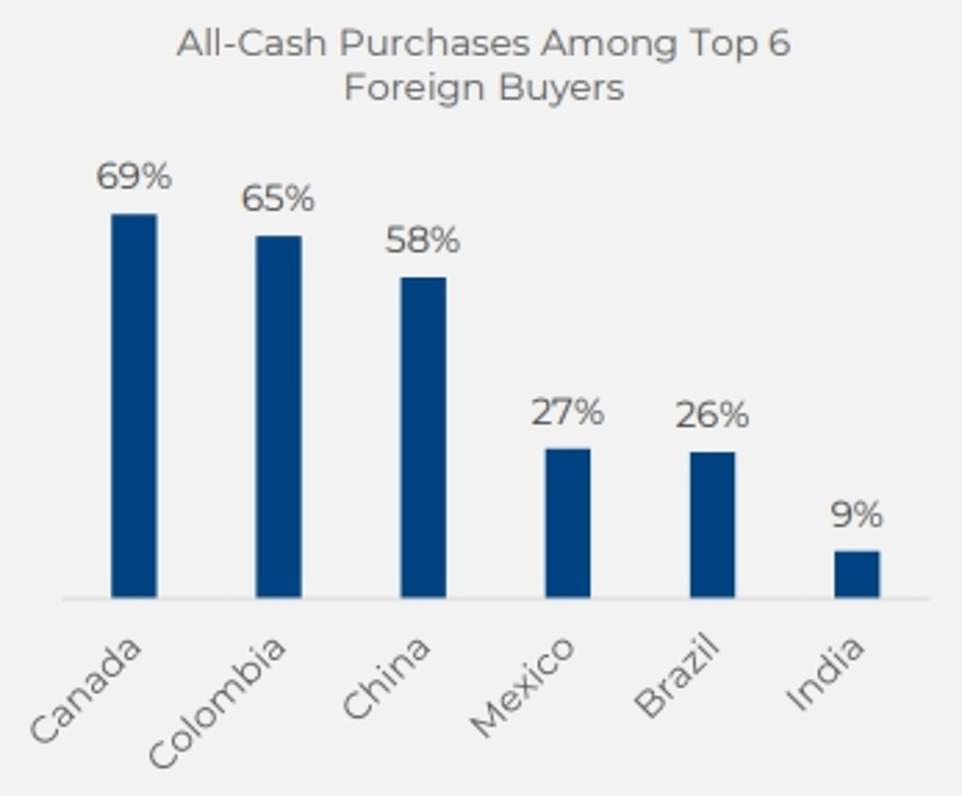 'A big part of that was about wealthier Chinese citizens moving their money abroad to avoid taxes and to avoid scrutiny,' real estate professor Benjamin Keys told the business journal.

US zip codes that hold the highest number of foreign buyers have increased housing prices by eight percent, according to the journal. Keys says the number of new jobs has increased far more than the number of available housing, causing property values to skyrocket.

'The big picture is we have an affordability crisis for housing in the cities where the jobs are,' he said. 'There are a lot of hoops to jump through to get anything built in these places, especially to build in a way that is dense.'

The top two most populated cities of 2022 - New York City and Los Angeles - as well as the 8th and 10th biggest cities, San Diego and San Jose, are found in the top most popular states. 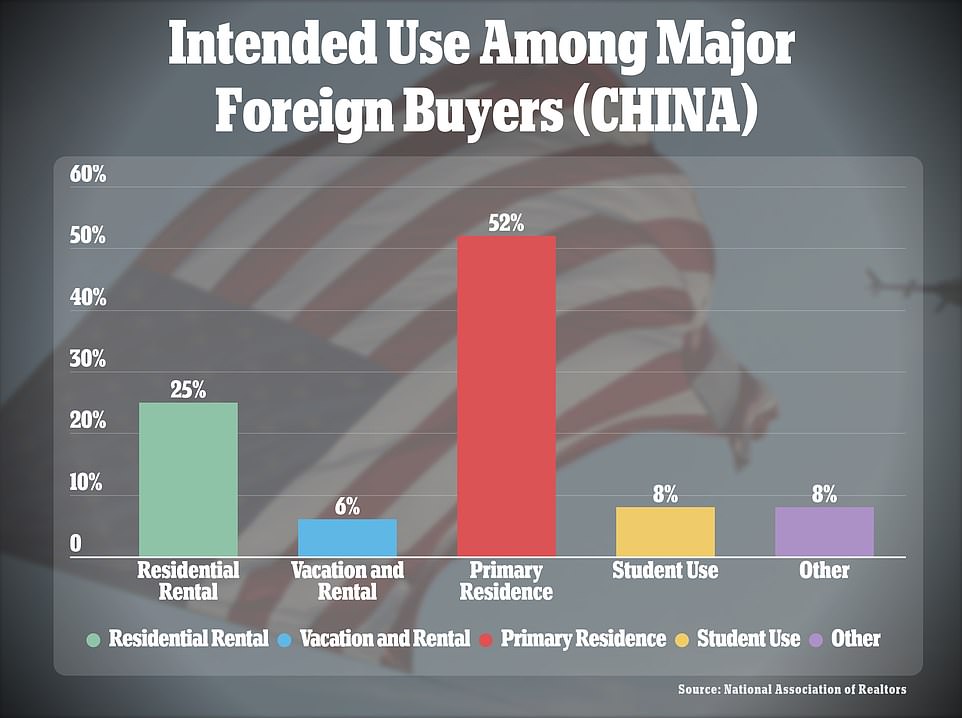 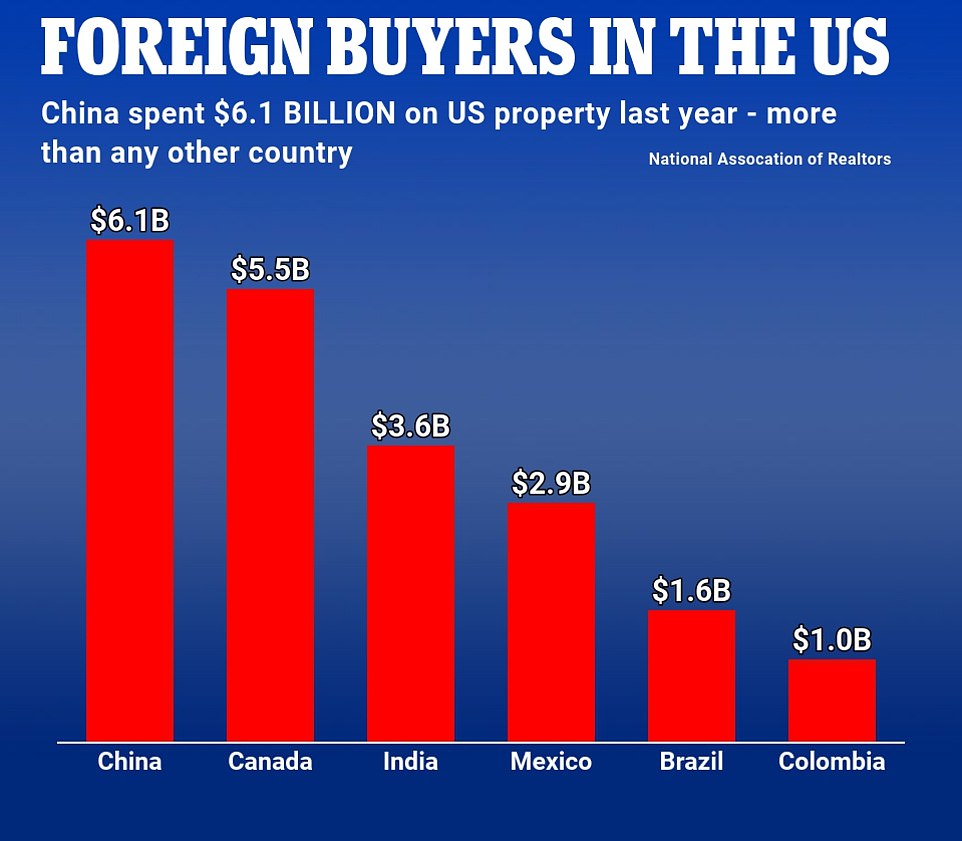 Chinese buyers spent $6.1billion on US property between April 2021 to March 2022, followed by Canada at $5.5billion

The top 15 states range in location, however, many are located in the South and warmer states, such as Oklahoma, Arizona, Hawaii, North and South Carolina, among others.

Keys also said that Chinese buyers are also sweeping up US property to 'avoid taxes and to avoid scrutiny' as many countries have started imposing taxes on them.

Wharton cited 10 policies imposed by five other countries in response to foreign investment in property that made the US 'relatively cheaper to invest in' because of its non-existent regulation.

Singapore, Hong Kong, the Canadian regions of British Columbia and Ontario, Victoria in Australia and New Zealand all imposed additional taxes on foreign buyers of residential property in a bid to avoid a huge spike in prices caused by demand from foreign buyers.

Singapore introduced its tax, known as stamp duty, in 2011, and it now sits at 20 per cent. In Hong Kong, stamp duty sits at 30 per cent for non-resident property buyers. People buying second homes are also hit with a similar amount of tax.

But Wharton Business School property expert Keys said that if COVID continues to drag on, it could actually offer relief to domestic buyers who find themselves priced out of the US property market.

Benchmark interest rates now sit at between 2.25 per cent and 2.5 per cent. Thursday's Federal Reserve rate increase of 0.75 per cent has put $200 on the cost of the average US mortgage.

The fact that it's now considerably dearer to pay off a mortgage - and continued uncertainty over whether there'll be a correction in property prices - has already seen the market begin to cool-off.

He explained: 'Clearly, there would be an advantage for domestic homebuyers.'

As Chinese and other foreign buyers continue to spend billions on US property, NAR found that China - which also includes Hong Kong and Taiwan in the data sample - are mainly buying 'primary residences,' compared to vacation or rental homes.

2020 lockdown should have taught Americans something. When you purchased anything in the mail.....WHERE DID IT COME FROM? CHINA!!!!!!!! Americans do not support anything U.S.A. anymore cause they don't want to pay us fair wages. And if it says USA without the periods.....that is an area IN CHINA THAT USES THAT SYMBOL TO FOOL YOU IDIOTS! The majority of items you see when you hit instagram and Facebook are products out of CHINA. Chew a gummy....you loose all this weight! Put on a face mask and all your blackheads come off and you looking like a model....yeah right! Wigs to make you look fabulous but you scare the shyt out your man when you take it off.....yeah! China go all y'all on lock. They are the winners!

rafael monzon you have to careful who you responded to on here unless you have the time, those are some ignorant uneducated old slave niggers who just listen to CNN and Al Sharpton. They do no read, they don't stand for anything they do not have a kind on their on

About 90% of the black community supported Biden afyer failing for so many years at every campaign they finally got him in, but those ignorant  niggers do not understand no democrats can get in office or hold a seat without black voters, Biden made false promises to black people like his lift every voice plan that was supposed to help the economy in the black community, he is giving billions and millions to every one but have yet to give a dollar to the black community, he is looking so dumb at being a president he is going back to the Trump policies that he repealed like begging refinery to go back to Alaska and drill, he is begging Saudi Arabia for oil when he was the pne who passed bill as senator for America not have any relation with Saudi Arabia due to inhuman treatment.

Now to the niggers who wants to attack you if they are really educated, if they value their selves and the community because they supported Biden ask them what is exactly included in the build back better plan for, we don't care what their negro leaders say, or what they hear on CNN we want to know what they read their selves from their own research, we don't want no argument, let them educate us about that Biden plan, if they can't do that you will understand why I don't interact with those slave niggers, I post my comments and keep it moving, but because they hold no information they can make you their focus when they come on hear, what else can their share with us, when the last time they post anything that can help the public?

Who said anything about having a dictator in office?

You can justifiably say that Biden is a better choice with the prices of everything sky rocketing, who just like every other president when they're out of office will off of your tax dollars get a six figure pension and when the next one steps in they can keep feeding you the BS that if we do this together I can, I mean we can get ahead theory? You're really saying that's a better option?

Comment by vaughn mitchell on July 31, 2022 at 5:51pm
Next lock down, keep waiting for the world to end first. Trump, talk big, his great america hat is made in China, his ties are made in China. Don the Con, talk big, just like he said the Saudis was heavily involve in 911, but quickly accept money to host their golf tournament. Money talk bullshit run a marathon. This country will never have a f****** dictator. Civil war will start if he think he will become president and want to become a dictator.

rafael monzon those idiots don't realize why the democrat don't like Trump, they are like monkey see and do, they vote on commotion not life security, it does not matter how broke they are or how much they are buried in poverty as long they can brag about being democrats, in theean time the white democratic community is moving ahead one way or another, and this is just the beginning negros haven't seen nothing yet. They are building project apartments and selling those old project building to the jews as they turn them to private buildings and raise the rent sky high on the negros, the Chinese are now their second landlord, negros are in the worse place believing the democrats will set them free and allow them to build wealth, I don't know one person who build real estate wealth from renting other rha owning, well thank God I don't have to deal with it, right now I am waiting for that recession to hit hard so I can get more rental properties, since the fed declare monkey pox a health crisis, I am waiting for the next lockdown.

Trump tried to tell them start charging them.

The Chinese are doing that every where in the world, they are ripping off Africa so do you think America is any better when Americans are so desperate for jobs and money