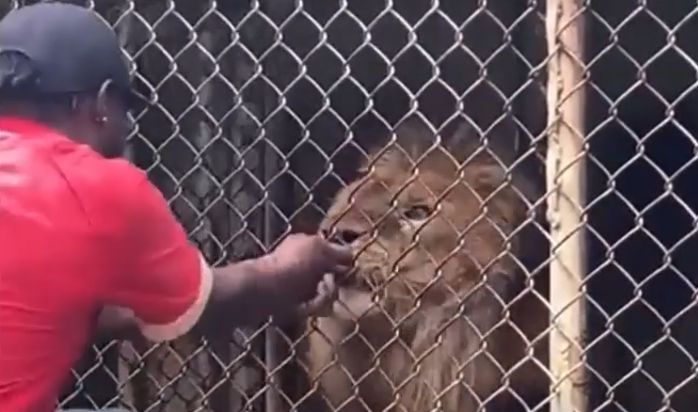 A shocking video is now rotating the internet after being originally posted by the Instagram account Soundchat Radio which showed a man who got injured by a Lion at the Jamaica zoo located in the parish of St. Elizabeth.

In a blink of an eye, however, the Lion grabbed one of the man’s fingers which caused a panic amongst the visitors who were at the location which was caught on camera.

As a result of the incident, the man’s finger was stuck in the animal’s mouth who refused to let go even though he was pulling as hard as he could. After some time, the lion finally let go of the man but not without out taking a piece of his finger according to sources.

Watch as the lion bites off Man’s finger at Jamaica zoo below.

In the video, it appears as if the man is a tour guide who is walking the visitors through the zoo and introducing them to the different animals, however, upon being at the Lion cage the man began to behave very bravely with the animal by pushing his fingers in the cage and touching the animal to the point where he even placed a finger in its mouth.

Darwin selection wins again, can imagine what the Lion was thinking.