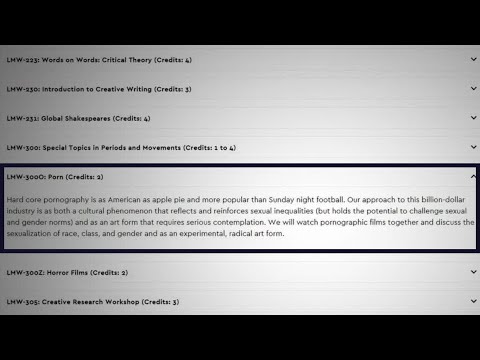 A private university in Salt Lake City, Utah, has raised a few eyebrows over a pornography course being offered.

Westminster College is reportedly devoting a class to the critical study of pornography, Blavity reports.

“Hard core pornography is an American as apple pie and more popular than Sunday night football,” the course description reads. “We will watch pornographic films together and discuss the sexualization of race, class, and gender and as an experimental, radical art form.”

According to the college’s website, students can receive two credits for taking the course. The class will be offered during the 2022-2023 academic year.

“This course aims to study the evolution of sex in mainstream films through a selection of U.S. films from the late 1920s to our present time. We begin with the pre-code Hollywood era,” the course description reads. “Note that most of these films have been banned (at one time or another) and, in some cases, the filmmakers and actresses/actors arrested due to obscenity laws in the U.S. and abroad.”

In a statement to Fox News Digital, a spokesperson for the college said it “occasionally offers elective courses like this as an opportunity to analyze social issues.”

“Westminster College occasionally offers elective courses like this as an opportunity to analyze social issues. As part of this analysis, Westminster College and universities across the county often examine potentially offensive topics like pornography to further understand their pervasiveness and impact. Descriptions of these courses, while alarming to some readers, help students decide if they wish to engage in serious investigation of controversial subjects,” the spokesperson said. “This course will help students learn how to think critically about the influence of digital media culture.”

Procreation, a natural biological function that got corrupted with religious indoctrination. 2022 and there are humans on the planet who are dysfunctional because of that. SMDH.

oh what a horror