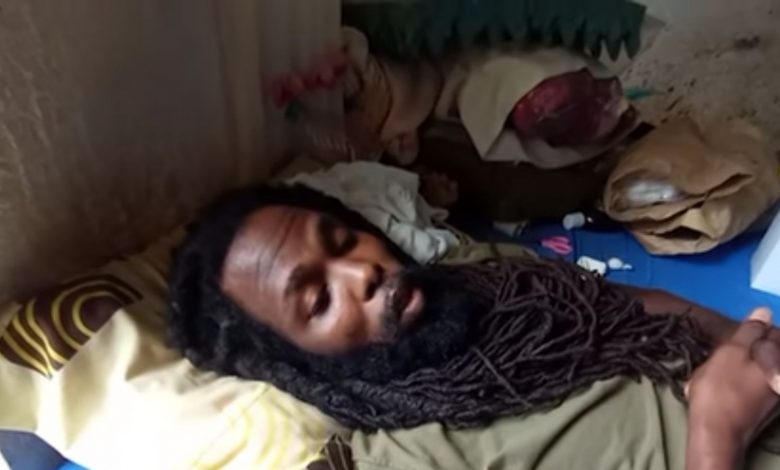 A man from the community of Gordon Town, St. Andrew shares a thrilling video story with the Jamaica Star on how he was shot 33 times in an incident that left him in a very broken state, losing his legs and damaging his arm.

According to the man whose name is Adisa Alexander the reason why he got shot up had to be because of mistaken identity, due to his preoccupations and the circumstances that led to the tragedy.

As a part of his daily life, Alexander says farming, construction, barbering, rearing animals and teaching martial arts was his line of work and so he was a very busy man and the day when the incident occurred he was just linking up with his friend at a shop because he got some free time.

Upon being at the shop, the man explained to the Jamaica Star who interviewed him at his home, that while he and his friend were talking, a car pulled up and a man stepped out and started to shoot, leading him to receive 33 shots.

At the moment of being shot, what Adisa said was a saving grace to him is when he heard a voice telling him to pray which he did. According to him after spending 1 year and 2 months in the hospital he finally came out but was disabled as his legs were gone and his left hand was damaged.

Since then the man, also broken in spirit, said he is unable to help himself and lives with his mother who tries to help him in any way she can regardless of her being sick. Alexander also mentioned that he had a wife and children but he explained to the news medium that his spouse left him after he came out of the hospital, telling him that she needs to move on.

As for his businesses of barbering and farming, the distressed man said the building for the barbershop was destroyed when a tree was cut down on it, and a number of his animals were stolen leaving him only with a few goats.

As for the man’s mother who also spoke to the Jamaica Star she is very hurt by the situation and is still shaken up. At the time when her son got shot she said even though she wanted to cry she did not, as she prayed and hoped for his recovery, so she had to just take it easy.

Currently, Alexander says as a result of his situation he has to urinate and pass stool at the same spot he rests since he is not able to move otherwise from pulling himself up on the bed to enable the process.

As a way forward, the now disabled Adisa says he would love to get two prosthetic legs and a wheelchair for him to move around. Otherwise, he explained to the Jamaica Star that he would love to add two more rooms in his house to put his children in.

As for the gunmen who carried out the shooting, Alexander says he does not know who did it; however, he has decided to forgive them in his heart.

Watch the video of the victim telling his thrilling story of being shot 33 times below.

He sounds like a great hearted man.. He seriously needs help.

Wife sounds more AMERICAN than Jamaican, to now leave him with the children in the hour of need. Must have received a higher calling,  women around the world do get "higher callings" , don't they?  Or it might just be possible but not probable.  Shocking  story but I'm not surprised,  she will be back and forth undoubtedly.

Wow this man was saved for a reason I hope he is very successful in his life's pursuits. As for his spouse she was not a real wife just a place holder.

<a href="https://patentediguidaregistrata.com/comprare-una-patente-di-guida/" rel="dofollow"> Comprare La Patente B </a>