African Forced To Eat Banana Like A Monkey By Racist Ukrainians 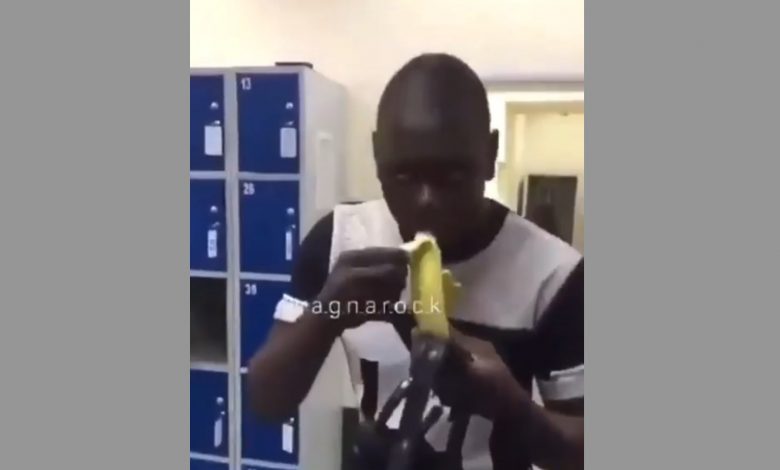 As the tension of the Ukraine crisis still builds in the air, more news about racism in the war-torn country continues to emerge in the eyes of the public.

Amidst the Russian invasion of Ukraine, many news reports have been made about the Africans being denied to exit the country due to racism. The Africans were reported to be facing harsh treatments, degrading comments and more from authorities that prevented them from safely leaving.

In a recent video, a dark skin African man was a victim of more distasteful acts of racism, which demonstrates how black people in the country are still being assaulted by racist Ukrainians.

Feeling forced, the African takes the banana, and it appears as if the Ukrainians instructs him to eat it. The African man complies by eating the banana unwillingly.

Watch with incident below.

This war is one big hoax.  I watch a video with a reporter in front of numerous allegedly dead people in body bags, and then mysteriously one of the dead people took the cover off and then you see a person going over to him to let him know it was a live shot.  Also, Russia just passed a law stating that any news agency caught reporting fake news could be imprisoned for up to 15 years.  Guess what?  CNN & BBC have suspended reporting in Russia.  It's all a big hoax man.  See the way I look at it, the Covid thing wasn't working, so hey, let's come up with another way to keep people in fear.  Once you're in fear you'll subject yourself to anything.  By the way, how come the news media isn't broadcasting the fact that Pfizer was forced to release documents to the public in regards to the harmful effects of the covid vaccine.  It's about 9 pages of side effects which are more deadlier than the covid itself.  No wonder they wanted to suppress this information for 75 years.  It's all a game to these criminals.  I don't believe anything these media people, politicians, uncle toms (Al Sharp-ass or Eric Adams etc) say.

Comment by Sheldine Forde on March 7, 2022 at 1:50pm
A hole racist Ukrainians, instead of focusing on the damn war and Russia, they focusing on black folks. No wonder they ass is in deep s*** now. FOH

He is trained like a monkey to bow down to them, I am sure he would have acted like Bonzo the chimp if they told him to do so, wonder what they will do to those butt licking Indians?

Comment by Sufferahsmusic Media Prod on March 7, 2022 at 7:44am
I cant believe i agree with dude

Comment by Sufferahsmusic Media Prod on March 7, 2022 at 7:44am
I cant believe i agree with dude

Fugg st. patricks day. I dare someone to try an pinch me.

While we are watching this you have niggers like Eric Adam going around feeling sympathy foe Ukraine, Am Sharpton talking about we should stand with you Ukraine, miggers are a cursed to black people they care about others more than they care about their own.

You should be protesting against this s***, thats why Putin is not going to stop bombing their ass and there's nothing any one can do about it, if they could they would, black people need to stop going to other peoples country and build their own, they will never like you or accept you no matter what you do. Now happy St Patrick's day to all the miggers who are mixed with Irish and Portuguese, this is a damn shame