Woman Crushed to Death While Lifting 400 Lbs at Gym | WATCH 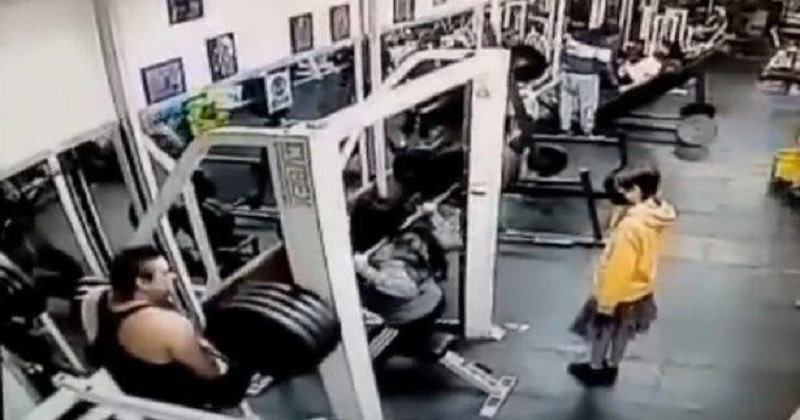 Woman crushed by 400 pounds of barbells

Good Lord! We can only wonder what she was thinking in the first place. We’re referring to a woman in Mexico who was crushed to death while trying to lift a 400-pound barbell. On top of that, it happened right in front of her daughter.

Viral video of the incident, which happened last Monday ()02-21-22), shows the mother attempting to raise the massive weight in front of her daughter at the Club Fitness Sport gym in Mexico City. Unfortunately, it didn’t go well because she simply was not strong enough to keep the barbells from falling on her. The 400 pounds of weight slammed her neck into the bench and the woman died on the spot.

The woman, who was said to be in the 35-40 age range was working out at the gym when the tragedy occurred. In the video, right before the horrible incident, a man adjusted the weights on the apparatus before the woman prepared herself to hoist it. But as we said, something went wrong and the consequences were immediate and dire.

As you can see in the video, the man and the young girl tried vainly to move the barbell off the woman in order to release her, to no avail. Two others then came over and assisted them to lift the gadget, leaving the woman motionless on the floor.

Paramedics from the Red Cross found the woman with no vital signs and declared her dead at the scene.

Her daughter was said to be deeply impacted by the incident and is receiving psychological support. The state prosecutor’s office has opened an investigation into the event. Authorities have yet to release the name of the victim. The gym owner was momentarily detained in order to verify the identification of the woman. The inquiry is still underway.

I saw this obliging stuff of data later an astoundingly clearing time stretch. Grateful for posting.

It thoroughly portrays the article I like. It is an especially coordinated site and the fashioner explains the goliath place interests beating everything.

Well in the line of duty, I guess she didn't care much about life

Because FOLKS out here doing the most.

She must have wanted to commit suicide…….