Facebook loses $237BN in largest one-day value drop in stock market HISTORY: Zuckerberg warns staff he might CRY due to 'scratched eye' in meeting as shares plunges 26% - dragging Nasdaq down 3.74% 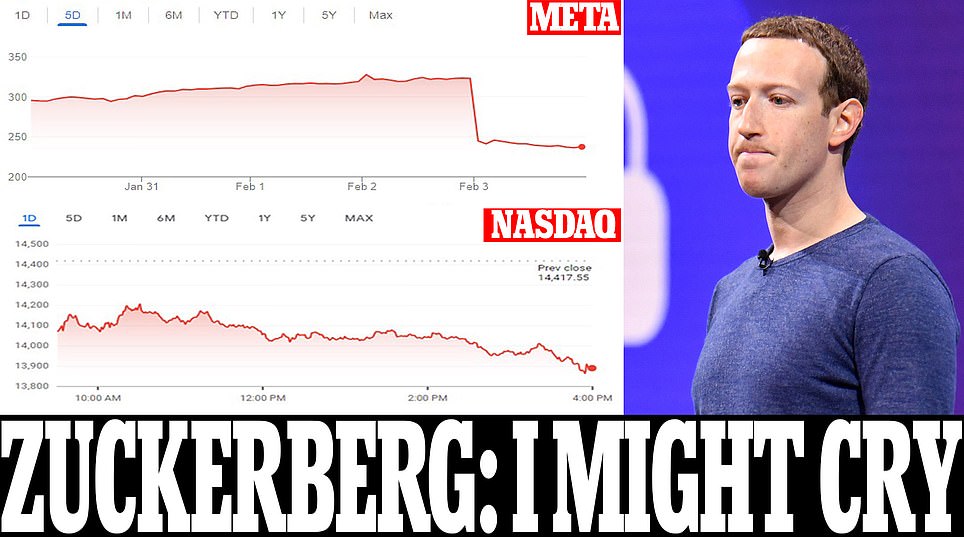 Facebook CEO Mark Zuckerberg told his employees to focus on video products and warned that he might cry from a scratched eye during a virtual company-wide meeting Thursday after the social media giant lost $237 billion - the biggest single-day loss ever recorded.
Shares in Facebook owner Meta fell 26 percent Thursday when the markets closed, after the social media giant issued a dismal forecast and reported its first decline in daily active users.  Zuckerberg saw at least $29.7 billion erased from his net worth.

The tech titan was the world's seventh wealthiest person on Wednesday, with a net worth of $113.1billion. But by market close on Thursday, he dropped off Forbes' top 10 list of billionaires - to No. 12 - as his personal net worth plunged to $83.4 billion.

Facebook's stock closed the day at $237.76 per share, sparking fear in international markets and pulling the tech-heavy Nasdaq down by 3.74 percent

Zuckerberg told his employees that the drop was due to a weak revenue forecast as the company faces an 'unprecedented level of competition' from TikTok, owned by Chinese company ByteDance.

The 37-year-old billionaire wore glasses and looked red-eyed, a person who attended the meeting told AdAge. Zuckerberg allegedly told his employees that he might tear up because he scratched his eye, and not because of the share drop. 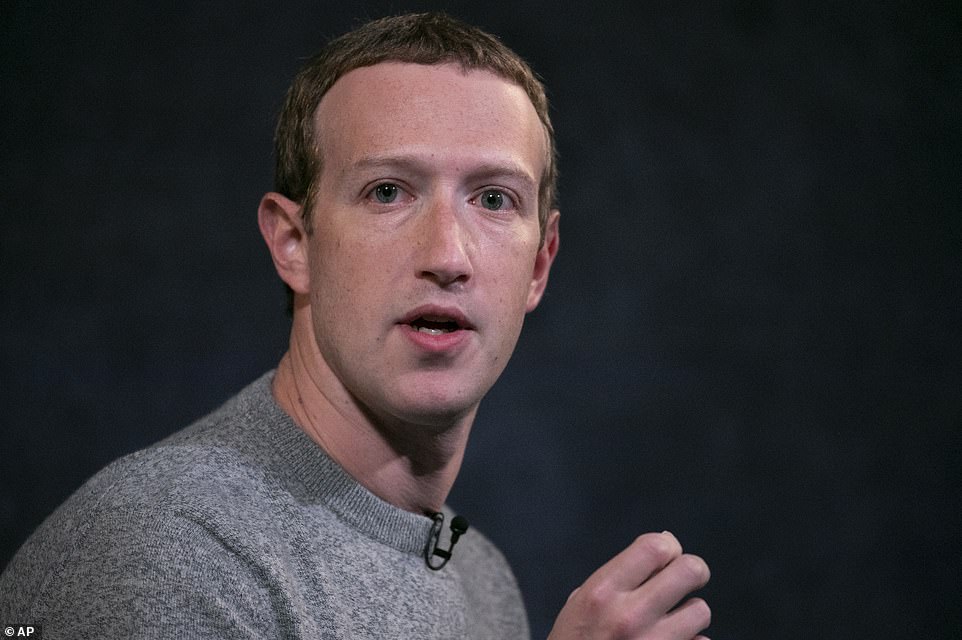 CEO Mark Zuckerberg saw $29 billion erased from his net worth as Facebook shares plunged on Thursday. During a virtual company-wide meeting, he cited unprecedented competition from TikTok and said he might cry after scratching his eye

The decline marked Facebook's worst one-day loss since its Wall Street debut in 2012, and dragged down broader markets in the US and around the world.

At the virtual meeting on Thursday, Zuckerberg responded to a question about burnout by saying that the company is considering offering long weekends, but he added that a four-day workweek would not be productive, according to a someone who was not authorized to speak about the meeting.

He encouraged employees to use their vacation days.

Another person familiar with the company's plans told AdAge that employee shares vest on February 15, meaning that employees are able to earn shares of the company if they stay through that date. Also, conversations about raises and bonuses happen in March, potentially factoring into workers' decisions to leave. 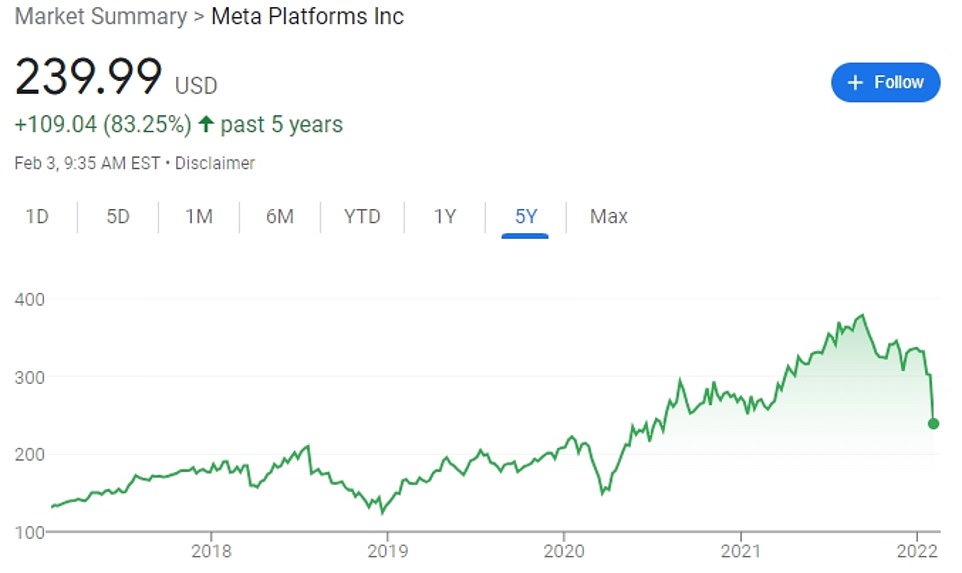 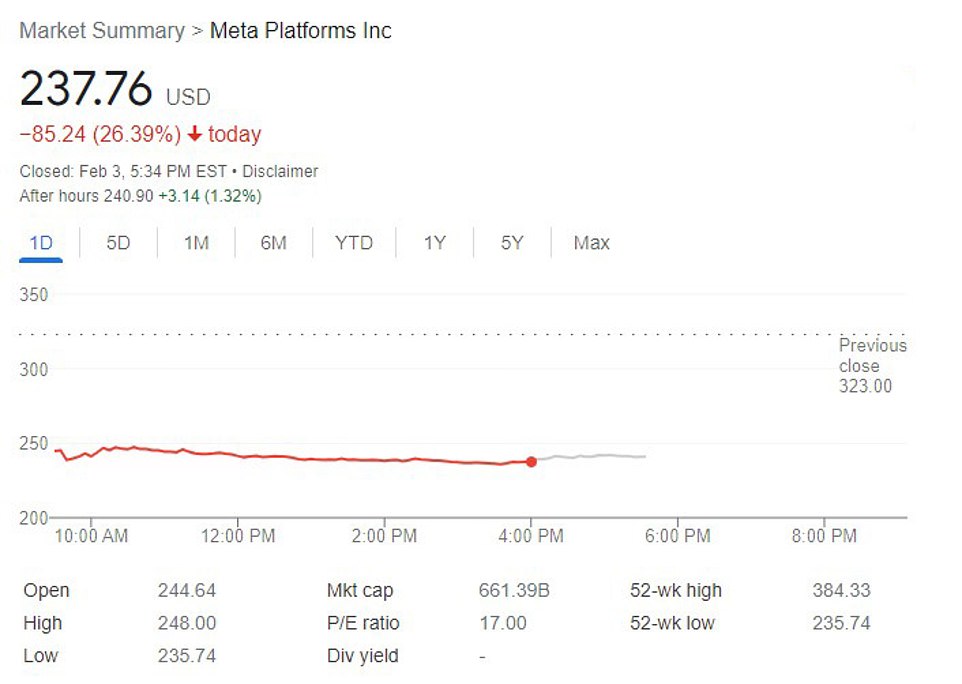 The company's overall value, known as its market capitalization, dropped by $230 billion, as the stock fell 237.76 Thursday 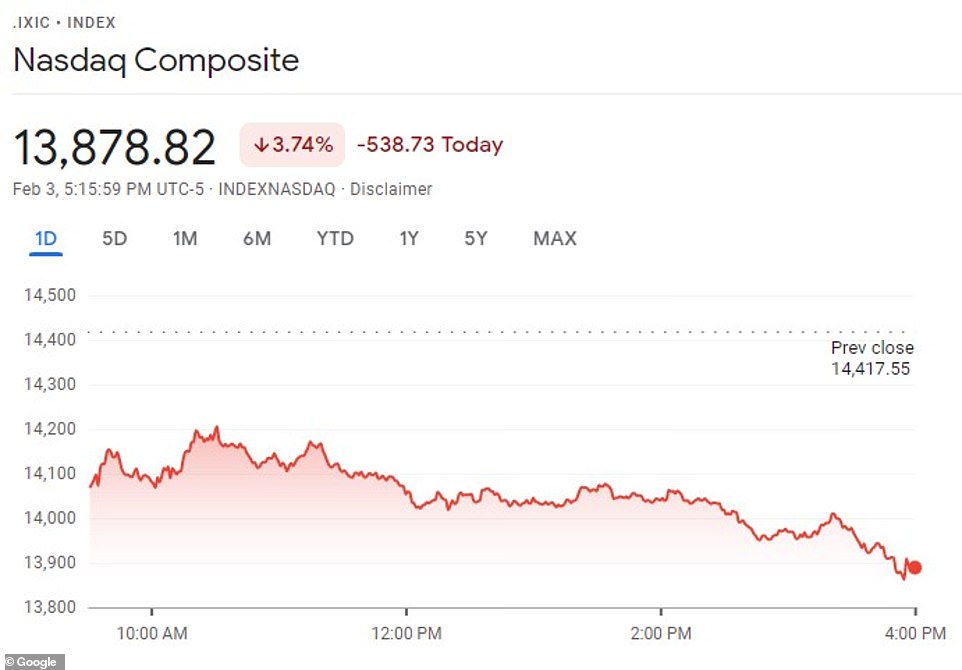 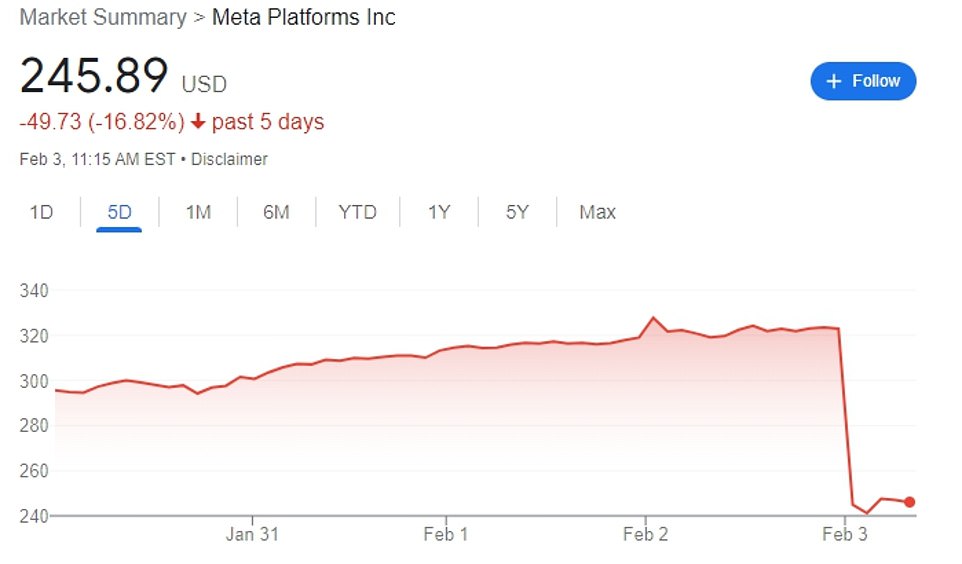 Facebook's woes spilled over to Europe, where technology stocks posted some of the steepest declines and soured the mood across global financial markets in another busy day of central bank meetings.

The tech-dominated Nasdaq fell more than 8 percent in January, its worst monthly drop since the end of 2019.

'The downgrade in the earnings outlook by Meta and other companies took markets by surprise,' said Kenneth Broux, a strategist at Societe Generale in London.

'The tech selloff spilled over to broader equity markets this morning and with the Fed preparing to raise interest rates, we could see more volatility going forward,' he said.

Meta reported a decline in daily active users from the previous quarter for the first time as competition with rivals like TikTok, the video sharing platform owned by China's ByteDance, heats up.

Meta said about 3 percent of worldwide monthly active users in the fourth quarter consisted solely of violating accounts while duplicate accounts may have represented about 11 percent of usage.

The platform's daily users loss was greatest in Africa and Latin America, which analysts allege may suggest the product is globally saturated 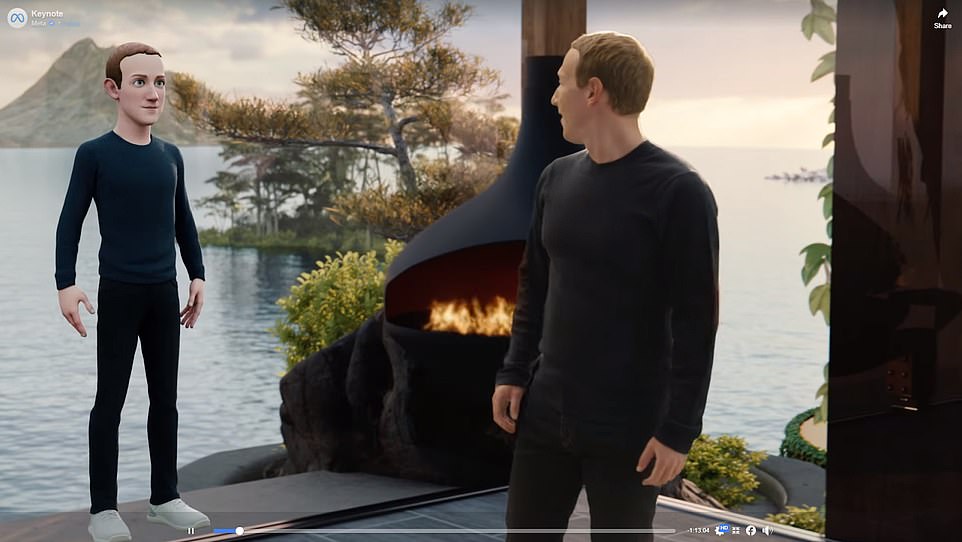 Meta saw its stock fall more than 20 percent Wednesday, wiping about $200 billion off the company's market value. The company heavily invested in its Reality Labs segment - which includes its virtual reality headsets and augmented reality technology (pictured) - during the final quarter of 2021, accounting for much of the profit declin

Facebook CEO Mark Zuckerberg told his employees to focus on video products and warned that he might cry from a scratched eye during a virtual company-wide meeting Thursday after the social media giant lost $237 billion - the biggest single-day loss ever recorded.

Shares in Facebook owner Meta fell 26 percent Thursday when the markets closed, after the social media giant issued a dismal forecast and reported its first decline in daily active users.  Zuckerberg saw at least $29.7 billion erased from his net worth.

Crypto rules the world now so its better to give it a try a new way of making money. Check this page guys and you gonna learn more about crypto gambling. You will find the latest news about crypto world here cryptocasinoslist.io - The best crypto & bitcoin casinos and the best platforms for gambling. Moreover, there are lots of tips and bonuses that gonna help you to improve your skills.

Comment by mr1stroke on February 5, 2022 at 2:44am
They ain't see nothing yet, a new day is coming, I jave invested in so many start up social media with do many better concept, Facebook can be soon a talk of the past after all many did not think tiktok would be that large, so keep crying white boy.