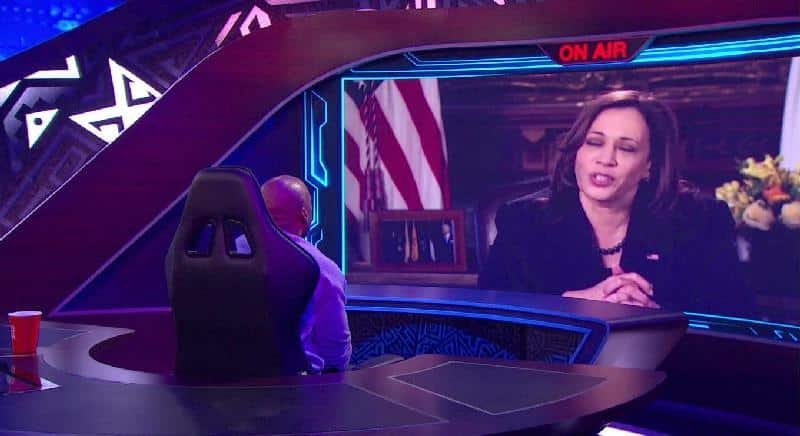 The American Vice President had to make sure Charlamagne knew that the President of the United States is Joe Biden and NOT Senator Joe Manchin (D-West Virginia) when asked by the host to name the country’s “real president.”

“It’s Joe Biden – and don’t start talking like a Republican about asking whether or not he’s president,” Harris told the “Tha God’s Honest Truth” host on Friday in an interview on the weekly late-night program.

“The reality is, because we are in office, we do the things like the child tax credit, which is going to reduce Black child poverty by 50 percent,” Harris continued, highlighting the administration’s efforts to lower the price of prescription drugs, lower the Black maternal mortality rate and enact police reform measures.“So I hear the frustration, but let’s not deny the impact that we’ve had,” Harris said.

Charlamagne, who also uses his real name (Lenard McKelvey) on the show praised her forceful response.

The “Breakfast Club” radio show host ripped Manchin throughout his talk with Harris, saying the centrist lawmaker is “ruining this country” and “blocking progress.” The TV personality’s comments came as Democrats in Congress have expressed frustration with Manchin over his hesitancy to back the $2 trillion social spendings and climate bill before the end of 2021, The Hill reported via MSN News.

Asked why Manchin is “allowed to constantly hold up Biden’s agenda,” Harris replied that in the 50-50 Senate, “every vote matters.”

“We have to listen to the voices who represent their districts,” she said.

Charlamagne warned that Democrats risk losing the support of Black voters in the midterm elections next year, and in the 2024 White House race, because “the stuff [Manchin’s] holding up progress on are hurting people, they’re hurting Black people in particular.”

Comment by Lizzette on December 22, 2021 at 10:27am
VP came hard, she put that plug in his ear. Made him switch his feelings

Comment by vaughn mitchell on December 19, 2021 at 11:39am
Kamala Harris, lacks class. She is first and only vice president who would lower herself to go on some ratchet radio with a radio host "Charlamagne" . When I am, was president why did not ask Biden, to come on his show? When Trump, was president why did he not ask Pence to come on his show, but she took the bait from sideshow Bob, like an idiot, lowering herself to that idiot. Why don't side show Bob, get Joe Manchin, on his show and ask him why he keep stabbing his party in the back. How he makes millions off the coal industry in West Virginia. Why is the state of West Virginia, rank last in education, earn income, healthcare.