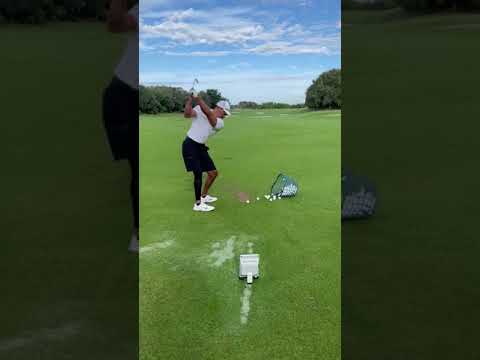 Tiger Woods has golf folks abuzz today after posting a two-second video of himself swinging a wedge on a golf course. He captioned it with two words: “Making progress.”

Woods has been publicly silent since May regarding injuries suffered in his Feb. 23 car accident in Los Angeles.

Woods was wearing a black compression sleeve on his right leg, with a large bucket half-filled with golf balls on a practice range. Behind him was also a launch monitor, which measures such metrics as distance and ball speed.

Woods was recovering from another back procedure at the start of the year when he ran his SUV over a median and it toppled down a steep hill on a winding, sweeping road in the Los Angeles suburbs on his way to a television shoot a golf course. Doctors said he shattered tibia and fibula bones on his right leg in multiple locations. Those were stabilized by a rod in the tibia. A combination of screws and pins were used to stabilize additional injuries in the ankle and foot.

In an interview published May 27 in Golf Digest, with which Woods has a financial deal, he described the rehabilitation from this surgery as “more painful than anything I have ever experienced.” He said at the time his top priority was “walking on my own.” He showed videos on social media in the last month of him walking on golf courses during junior events.

Woods has not played since the PNC Championship with his son, Charlie, last December. His last full tournament was the Masters one year ago in November.

Woods has had 10 surgeries — four on his left knee, five on his lower back and the most recent for the crushing injuries from the car accident in February. He turns 46 on Dec. 30.

I'd say that if someone has a passion for sport or whatever, he will recover faster than anyone because he has a goal that has to be achieved. I hope he feels great and we will see him again soon.

I like your blog it is well written in a proper format. I am here sharing the

boden discount that can be used by anyone.