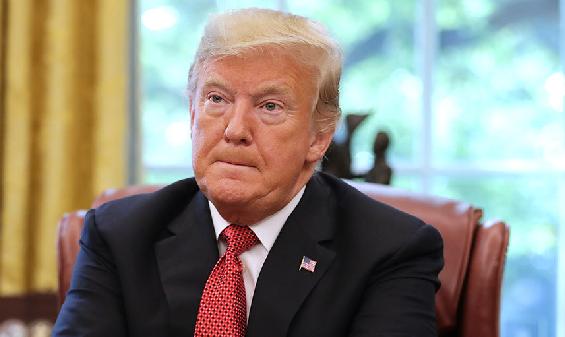 Donald Trump embraced familiar fearmongering rhetoric about migrants on Fox News on Thursday, warning against accepting Haitian asylum-seekers because “many of those people will probably have AIDS.”
The former president made the comments during a discussion about immigration with host Sean Hannity, who said he was all for “legal immigration,” but asked if it was wrong to require a “security check to make sure you don’t have radical associations,” a COVID-19 test and proof that you “won’t be a financial burden on the American people.”
Trump said he supported those measures and brought up “one other thing that nobody talks about.”

“So, we have hundreds of thousands of people flowing in from Haiti. Haiti has a tremendous AIDS problem. AIDS is a step beyond. AIDS is a real bad problem,” he ranted. “Many of those people will probably have AIDS and they’re coming into our country. And we don’t do anything about it. We let everybody come in.”

“It’s like a death wish for our country,” he added.
Trump infamously called Haiti and African nations “shithole countries” during an Oval Office meeting with lawmakers in 2018, and followed up by suggesting the U.S. welcome more immigrants from countries like Norway.

Haitians have long sought asylum at U.S. borders. These migrants have for decades been subjected to violence and racial discrimination demonizing them as disease carriers.
Conditions in the country have deteriorated after it suffered a magnitude 7.2 earthquake, a deadly tropical storm and the assassination of its president over the summer.

An estimated 15,000 Haitian migrants ― not hundreds of thousands ― recently reached the international bridge in Del Rio, Texas, hoping to cross into the U.S. Since Sept. 19, the U.S. government has expelled more than 7,000 of them on flights back to Haiti.
The Biden administration has been under fire for its treatment of Haitian migrants after footage showed border patrol agents on horseback corralling asylum seekers and shouting at them to return to Mexico.

Folks.......There are 2 wings on the eagle, the right wing and the left wing.  I say this to say that at the end of the day it's the same bird no matter what wing you choose.  At the end of the day, America was built on racism against blacks.  That's why I don't understand why our people keep voting and are constantly screwed and they don't even use lubricant.  The definition of insanity is "To do the same thing over and over expecting different results but get the same result".  They're all racist.  Some are more racist than others, and some hide it very well.

I APPROVE THIS MESSAGE!!!

Lol that's why many need to understand the America we live in, he just getting better at exposing real white America, now that he said it on National Tv many will repeat it and think the same, so lets make sense of it, if the people who are following him were not racist they would go against him, they would boycott fox, but guess what, they will be at every rally and will support his next presidential campaign, until every one understand whats going on they will not understand why America is so racist, all white people think the same, he is the only one who have the balls to say it out loud, he embraces his true racism, thats why I like him, I can hunt him down any day, but he is the bait for me to recognize the rest who are like him, if Biden is not thinking negative about those people why don't him and his congress repeal title 42, its not that hard it is as easy as all of those he has repealed, I cannot think like the rest, I question true evil.

Trump was a great real-estate developer and businessman who owned, managed, or licensed his name to develop many businesses. he wanted a proper and well managed boundaries. Bidens policies are good but not as good as Trump. lets make usa great once again.

Comment by vaughn mitchell on October 11, 2021 at 12:15am
Biden, is bad but this damn demon, the Haitian people are suffering, that country was cursed through out history, they suffer early quakes, hurricanes, and the assignation of their president, and he said these people have aids. The Cubans was worse when they came to Florida, but it was ok, because of their skin color but Haitians, have to put up with alot of s***, now this devil talking about they have Aids, and this is man people want back in the Whitehouse. If he get back in this country is deep s***.