Rev. Al Sharpton Went to Del Rio to Speak on the Haitian Crisis and Got Shouted Down | WATCH 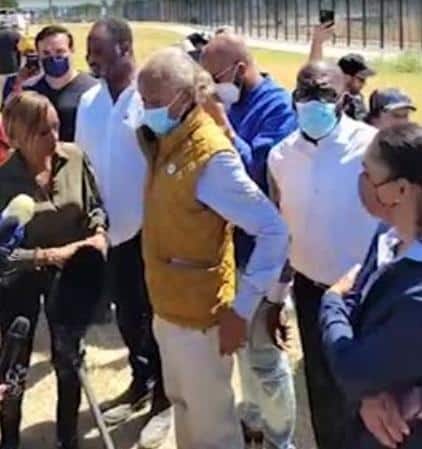 Towards the end of the week Rev. Al Sharpton went to Del Rio, TX to speak out on the harsh treatment that was happening to Haitian asylum seekers who illegally crossed into Texas from Mexico near the Del Rio International Bridge.

Whatever Sharpton had planned to say, for the most part we’ll never know because he got unceremoniously shouted down by at least two people assembled with news media reporters. It’s not clear at this time if the two verbal combatants were “journalists” for some right wing blog or were … hell, who knows.

Anyway, it was obvious from the jump that Sharpton was in for a fight. Fortunately, not literally. The video below is quite vivid.

(The video footage was taken on a camera phone by Joel Langton who is the publisher of the Del Rio online and print news publication called 830times.com.)

As soon as Sharpton disembarked from his Suburban vehicle he was met with hostile questions. “Mr. Sharpton, why have you not been an advocate for the kids who are being trafficked at the border right now. All the kids that are being brought over have been drugged or sedated coming into the country,” one man describing himself as a first generation latino and a news source called “Border Report News.” Sharpton was asked why he was a racist, as well.

“Nobody wants you in Texas! Get out with your racism! This is a loving community. Get out of Texas!” screamed some in the media crowd. “Our border patrol agents are heroes,” came the shouts. Today, the White House announced that the CBP horse patrols must dismount.

As Sharpton attempted to make his case for why he was there to “inspect” the border on the west side of the Del Rio International Bridge, another reporter from Real American Voices also heckled Sharpton, drowning out Sharpton’s remarks.

Langton said he did not hear anything Sharpton had to say. He added that he hasn’t seen anything about what Sharpton said at the border online since. Sharpton stopped to speak with reporters after he and his entourage were given a brief tour of the encampment underneath the international bridge.

Near the end of the video, the Border Report News correspondent almost gets into a physical altercation with one of Sharpton’s body guards. Langton said after Sharpton departed the border, he hopped on a private jet and left Del Rio. Watch the video above.

O g she is suffering from the willie Lynch ayndrome, every black person should make their kids read the Willie Lynch letter making of a slave, and educate them on what is it about for reason luke this and people like this, they will understand the division and hate among blacks

Yasmin lol this is sad, I see you know youre history, so this is what you teach your kids, wow it gets better, so who are your people by the way, youre from trinidad, what is your race? Lol sad but not sorry, and they wpnder why I hate niggers, they rather die than to accept their selves, you hate haitian but love white people lol

Yasmin lol you are a coconut and youre talking about we need to fix, what exactly do we need to fix when youre holding a green card, how can you help fix anything, what have you help fix? sit your immigrant ass down and keep collecting that litle pay check from your master, I was born in this soil and i appreciate any black person who are willing to be productive and help elevate the black race, when you sound like that what do white people say about you, yup you are one of those loyal niggers, i bet when people call you black, you respond I am not black, I'm from trinidad lol learn your damn history, pick up a book and stop thinking christopher columbus was your savior

Well you guessed wrong I'm from Trinidad I was raised in America I have American family  and who the hell are you to tell me I don't know my history I bet you one of them negros who think they ancestors was from Africa Not this is an American platform that is marketed towards Caribbeans. Y'allo e to spend that story about how Haitians helped us fight Haitians ain't help us do s***! Oh and a lesson in history they where shipping American Indigenous people to the Caribbean so half of your population is American decent mixed with the Indigenous Caribs who were the Taino and Arawaks and those people who helped us fights were our own people from Barbados not Haiti! And I know you must be Jamaican talking about Marcus Garvey and Farrakhan two of the biggest sellouts and CIA agents in history this n**** Garvey started that Pan African bullshit and telling American Black people to go back  to Africa when his ass ain't never even been to Africa and died in Europe. And don't get me started on Farrakhan sellout, agents  bamboozled ass a s ain't s*** neither. Here you go talking about the white man the white man is the least of our problems our problem is us. I hate myself you sound stupid and my people weren't slaves they were prisoners of war there were very little to none of American Indigenous people who were slaves do your research and learn your own history cuz by the way you talk I can tell all you know is what the white man has told you.

Comment by O g on September 28, 2021 at 3:10am
@yasmin from your comment am guessing you're black american once again someone who don't know your history someone who is very ignorant base on your comment no1 you are on a Carribean platform no2 google if you do you will that a lot of Carribean country help America Haitain are one of them it's in the history books no3 about black Americans Carribean people has always been there fighting along side black Americans example Marcus Garvey and to present day today Rev Louis Farrakhan he Carribean bet you don't know so don't come on here to promote hate and division you love to pick on other black people and go after them but you can't go after the white man is it that you hate yourself so much or we all just suffering from the effect of slavery

American Indigenous  people are tired of hearing about other people's problems we quick yo run to the rescue of others that don't give a s*** about us so what because they are black they depise American Black people we need to fix the s*** we got going on here with our own people let them fix they own problems nobody jumps to our defense but we always have to be everybody's advocate f*** them Haitians.

Why don't his ucle Tom, coon ass go talk to his massa Biden, those people don't need some one to speak, they need a helping hand