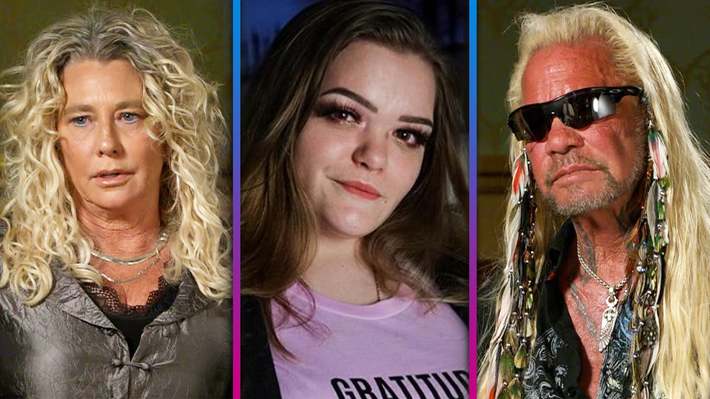 Dog the Bounty Hunter has been called a racist by his own daughter, but Dog says he was given a pass to use the n-word by his Black homies.

"I have never been a racist—I'm 33.5 percent Apache—but because of over 15 years ago, I have an Achilles' heel because I used the wrong word," he told Entertainment Tonight. "I thought I had a pass in the Black tribe to use it, kind of like Eminem."

He was asked who gave him the pass.

"I had just gotten out of prison in 1979 after spending time, 18 months in Texas, and it was probably three-fourths from the Black tribe," Dog says. "So that was a word that we used back and forth, as maybe a compliment. My pass expired for using it, but no one told me that."

His daughter Bonnie claims her dad is a racist and has not changed.

"I have expressed time and time again my ever-growing disappointment in my father's progression into his old racist ways," she wrote on Facebook.

Allen E. Lol ok I guess you are right, Africans don't want us there so,we should be okay with that, but the white men hate us with a passion here we march and fight to tolerate their hate, but you have a ministry that is register a nine states and you preach the Gospel, so whats the purpose of your ministry again? This is Africa is that bad but we allow white people to label us as African American, why accept that title, by the way who don't know how lessed up lagos is just like browsville Brooklyn? Of boy, so much for the negros who allows to own by the white men, I guess it feels good huh, well enjoy all pride my man, do you and keep feeling like this

ok,stroke. whatever you say,man...I READ what you wrote,and all I WILL say is okay.I DIDN'T TELL YOU EVERYTHING...like me owning property in racist Virginia and having property in North Carolina and The Ministry being Incorporated in 9 states...AND NO MATTER what YOU SAY,I KNOW that Africans in CERTAIN PARTS OF AFRICA...(I'll write it again)...Africans in CERTAIN PARTS OF AFRICA DO NOT WANT us there. Maybe the ones that YOU talk to claim to want YOU there,(so they can rob you and you NOT coming back HERE...smh),but MANY DON'T want us there...do you know about the GANGS AND TRIBES IN AFRICA that rob and kidnap Americans? Someone wrote,(concerning visiting Africa):

"So when I went to South Africa by myself I had locals warning me about how unsafe it is. They would never advise someone to come by themselves. But I never felt unsafe there. When I was in Ghana and thinking about going to Nigeria for a wedding, even Nigerians in Ghana were like hell no you do not go to Lagos by yourself. You’re crazy. It’s confusing and conflicting trying to understand how to even travel to Africa when everyone has something different to say about how to travel there when you defer to people from said countries. You can end up with a lot of conflicting information that doesn’t make your trip any easier. This is not unique to the continent. I lived in New York City, my family is from Brooklyn and Harlem, so I know how to navigate the city in a way that’s very cost effective and I feel comfortable and safe. I have people to take me out, to entertain me, to be with me. But I also understand how NYC can be a very daunting and expensive experience to someone with no connection to the city. We have to remember that while some place is home to us, for us it’s welcoming, warm and familiar, other people will be overwhelmed by the same things that strike us as familiar. What brings joy to our hearts, might give someone else a real deal anxiety attack."....

"Africa has a bad reputation. This does not mean that I think the continent is bad. It means it has poor marketing. The very worst stereotypes of Africa are that it has Islamic extreamists in the North, Pirates to the East, scammers and corruption to the West, Political instability and child soldiers in the middle and bandits in the South. At best, you'll be robbed and have your identity stolen, at worst you'll be kidnapped, held to randsom and killed. In writting this answer I googled "Africa". The first link was the continents Wikipedia page. The next two were for BBC News and the Guardian (a UK newspaper). The top news stories for each of these links were: Nigeria police hunt Lagos schoolgirls' kidnappers and Uganda's failure to spend Global Fund grants denies thousands HIV treatment Generally speaking, any positive conversations about people of African decent are centred around fixing the issues of the nations they live in (eg the US), rather than anything positive about Africa as a continent." (excuse their spelling,but I copied and pasted what they said and How THEY SPELLED it)....

So,STROKE,I'm cool RIGHT HERE AT HOME! NO one took ANYTHING from ME,but they robbed our ancestors...so,if YOU go to Africa,don't talk too much....lol...they don't care about New York...they probably don't know what a NEW YORK IS...STAY HOME,Man.

If you are proud of who you are and proud of being a man of color, why don't you have to mention all that Cherokee stuff, do you think a white person give a damn or care, they see what they see, Africans dont want blacks in Africa huh, well what kind of book are you teaching, have you teach those Africans youve met, because I know many brothers and sisters who migrated in many places in Africa and refuse to come back to America, I have done many deals with Africans who travels back and youth begging me to come to Africa, during the pandemic every time i did a zoom meeting people in Africa begging me to come there, they want to show me around, if you have read any one of my comments i always tell people I do not care for anywhere else i want to travel and lay to rest any wjere in Africa, I am not concern what any African wants, but I will say the same thing to you that I say when I meet an ignorant Africans, I tell them until they stand up against the white people who have been torturing Africans and ripping of Africa they are stupid for telling other blacks that they don't belong in Africa, those are the original ignorant niggers who sold their own brothers to slavery, they so don't want othet blacks in Africa but slaving to come to America, why not stay in Africa if thats the case.

Now I don't care what I am mixed with, I am just prpud to be black, point blank period, I don't care about DNA unless those i am mixed with will give me back everything that was taking from me, I am not attacking but I am just saying either one is proud to be black or would like to be part of another group, if you have not been introduced to any group that you are related with, technically you are nonexistent to them, and by the way I struggled in tge project from North Philly to NY, now I am my own business man, and part of a family business and do not have to punch the clock for a white person and dont have to rely on any white helps, and I didn't even go to yale, see that, blessings are blessings, now I live up the heal with my own personal acres i think that is getting to small because i am preparing my self to be able to own a flying car, if you read the codes they start to tell you the codes, lets be thankful

lol...y'all are funny. I LOVE WHO I am as a MAN OF COLOR. Did ANY of you know that in NIGERIA,"NEGRO" MEANS "BLACK MIXED WITH WHITE"? LOL...Africa DON'T WANT us there...I heard that FROM Africans...I was simply making a statement to what someone here said...see,MY GREAT GREAT Grandmother WAS Cherokee,Blackfoot AND Navajo...meaning that because of that,I have some of that In my DNA...but again,I say: I AM PROUD TO BE A MAN OF COLOR...I ALSO GREW UP IN THE PROJECTS..THEN lived in a  house,,,THEN went to COLLEGE AT YALE UNIVERSITY at 15 years old,(Can you dig THAT?)..AND NOW God uses me to Teach the HARDEST BOOK IN THE WORLD.. BUT STILL: I AM PROUD TO BE A MAN OF COLOR...A BROWN MAN! Word.

But how come those other races never considered of,being mixed with blacks, thats what I call true niggers, always trying to find acceptance in other people instead of loving their selves, I would rather die instead of admitting that I am mix with another race other than Africans of any descent, love your self, no one else wants to be black, oh he'll not even blacks want to be blacks, no wonder they enjoy killing each other, its 2021 evolve like technology that is running our daily lives

Black people love to swear that they're everything else but black and at the same time, want to swear that everybody else is black.  Years ago, someone wrote a comment on this site saying that Asians are black.  I said really?  I bet if Asians tried to participate in something that was black cultural, they would be screamed at 'You're not black!'  It sounds like we would consider other people black only when it's convenient.

@Yasmin ...in my lineage,there's Blackfoot,Navajo and Cherokee...that I know of...My Great Grandmother was all of that. Can you dig it?