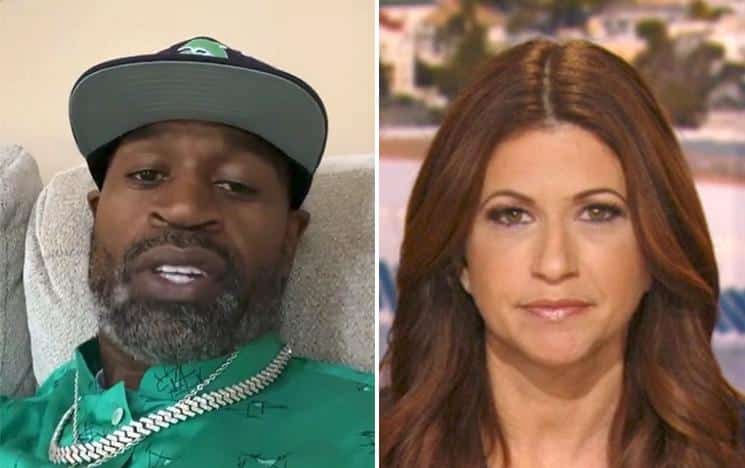 As we reported earlier, ESPN host/reporter Rachel Nichols had a conversation in 2020 with Lebron James’ PR flack, Adam Mendelsohn, that leaked and went viral because of what Nichols said in regard to how she could prevent Maria Taylor, a Black ESPN anchor/reporter, from taking over her job during the NBA Finals last year.

Nichols, of course, has been catching a lot of flack for her comments and now, for whatever reason, former NBAer and current podcaster, Stephen Jackson, has put his two cents into the mix. He’s basically agreeing with Nichols, saying if it had happened to him, he’d be pissed and calling out the network, too.

He initially posted a video saying “F**k ESPN” and called himself “Team Maria.” Jackson deleted the video and shared another one in which he defended Nichols. He said ESPN gave Taylor a “sympathy job” due to the protests surrounding the death of George Floyd:

“We all ramble and we say things when we’re frustrated, and Rachel did deserve that job, it’s just plain and simple, I’ve talked to Rachel and I know a lot of things she was saying out of frustrations because ESPN put her in a bad position and they even put Maria in a bad position by trying to give Maria a sympathy job, they were trying to make themselves look good because of the Black lives Matter and the George Floyd stuff was going on. So ESPN tried to make themselves look good by taking the job from Rachel that she had already had – that they already told her she had… ESPN is behind all this. It’s all they fault… ESPN, y’all some suckers!”

“How mad were we.. when we know we deserve the job, and they give it to a white person just because he white? We been dealing with that our whole life, and that p***** us off,” Jackson also said. “We ain’t gettin’ recorded but we say s**t too behind closed doors. So I get it, I get it why Rachel is mad. Rachael never showed me any signs of being racist.”

The ex-pro hoopster went on to say he is rocking with both Nichols and Maria Taylor, who Nichols was speaking about.

OK, whatever. At this point, based on the reaction to Jackson’s comments from Black women in particular, he’s probably wishing he’d kept his trap shut. Here’s some sample responses via Sandra Rose:

You can always count on a black man to come to Becky’s defense over a black woman. Eff you. That’s why I don’t match for y’all’s behinds


In the past Stephen Jackson has reportedly admitted to preferring White women over Black women so this doesn’t surprise me. You can find the clip on YouTube.


Becky has gotten such a good sense of taking it all from black women because they think they are better and BM tell them they are better than us. When things go left Becky will definitely cry cry cry until she gets what she wants.


Don’t worry about this clown. Kwame Brown will light him up later on today. ESPN and the rest of this companies is only trying to make black folks happy with this tokenism, inclusive, diversity bull crap. Black folks (some) would like this fake scenario about YT wanting to include them. Me personally I would rather people tell me that they don’t want me than pretending that they want me.

Hi, have you ever tried to understand the secrets of online casino software providers? I recently read about it and I really liked it. I advise you to use the articles like this one https://www.topnotchroulette.com/online-casinos/top-online-casino-s... in online games and you can learn fast about top providers in gambling.

Comment by vaughn mitchell on July 6, 2021 at 5:25pm
He is a dumb backwards negro, he catching much hate, because him and Rachel Nichols are friends, and he does not know Maria Taylor, now ESPN, won't allow no women to work the side lines of the NBA, finals, cause of this bullshit. Maria's contract is up this year, if she does not get sign back Rachel Nichols, and Stephen Jackson, will catch much hate, as for LeBron, he need to fire his agent who talk s*** about him around his back