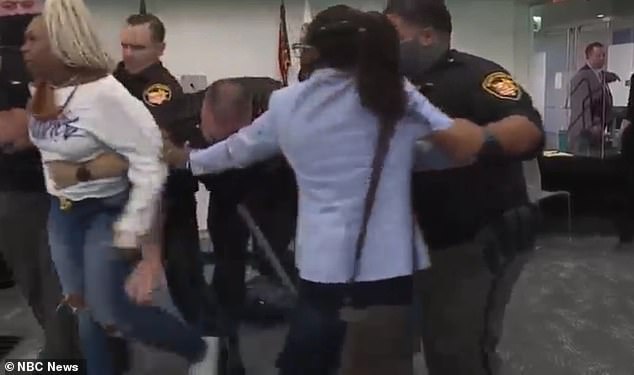 Megastar gymnast Simone Biles' brother was attacked by a furious murder victim's mom in court after he was acquitted of killing three men.

Tevin Biles-Thomas, 26, was rushed by the mother of victim Delvante Johnson, 19, after he was cleared of killing the teen.

Johnson's mom raged: 'You have to be f***ing kidding me! I'm going to kill you!' as she ran at Biles-Thomas from the socially-distanced public gallery at Cuyahoga County Common Pleas Court in Cleveland, Ohio, on Monday.

She managed to topple a table close to Biles-Thomas, but was restrained by court guards before she could physically harm the defendant, who was seen backing away from the mom as she was apprehended. His defendant Joseph Patitice says he was hit during the onslaught.

Biles-Thomas was accused of shooting dead Delvante Johnson, 19; Toshaun Banks, 21; and Devaughn Gibson, 23; at a New Year's Eve party in 2018.

But on Tuesday, Cuyahoga County Common Pleas Court Judge Joan Synenberg said prosecutors did not have enough evidence to convict him of their murders.

She then dismissed all 15 charges based on insufficient evidence, ruling that a witness' description of the clothing worn by the shooter was '75 percent at best.'

It was that acquittal that prompted the angry outburst from the victim's mother.

Following his acquittal on Tuesday a woman rushed towards him yelling: 'You have to be f****** kidding me' and saying 'I'm going to kill you' 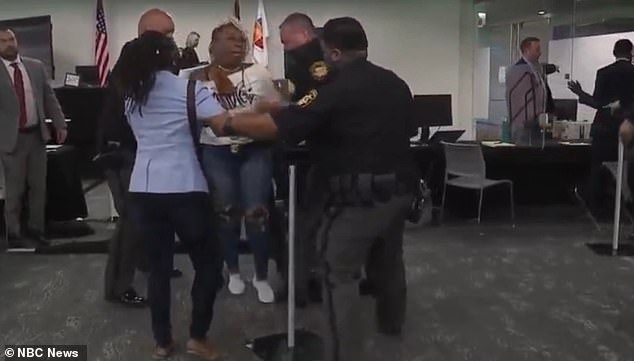 The woman was later identified as the mother of Delvante Johnson, one of the shooting victims 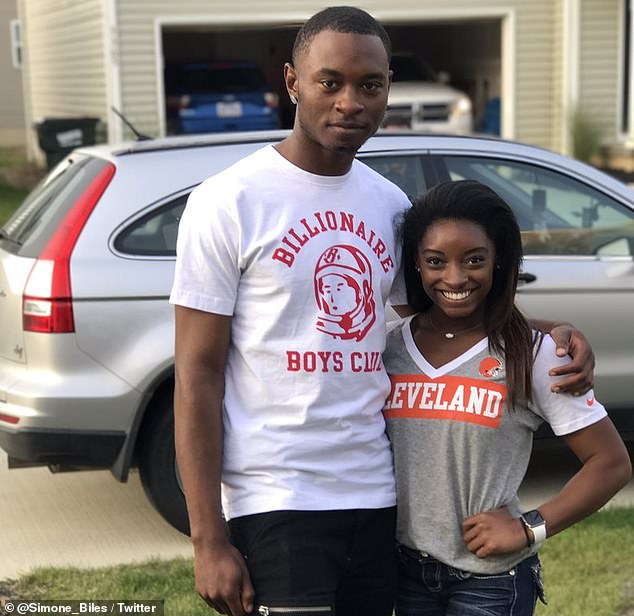 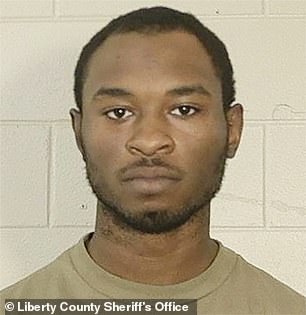 The Cuyahoga County Court in Georgia later confirmed in a statement that 'a person in the gallery charged toward the defendant.'

The woman was later identified as Delvante Johnson's mother by Joseph Patituce, one of Biles-Thomas' defense attorneys, according to NBC News.

Biles-Thomas was arrested at Fort Stewart in Georgia last year for the triple homicide at an AirBnB in Georgia.

The shooting allegedly occurred when an 'uninvited group' entered the property and got into an argument.

An indictment said he 'had a firearm on or about his person or under his control while committing the offense and displayed the firearm, brandished the firearm, indicated that he possessed the firearm, or used it to facilitate crimes.'

Following the arrest, Olympic gold-medalist gymnast Simone Biles released a statement saying her heart went out to the victim's families, and she was struggling to process the news.

'There is nothing that I can say that will heal anyone’s pain,' she wrote at the time, 'but I do want to express my sincere condolences to everyone affected by this terrible tragedy.' 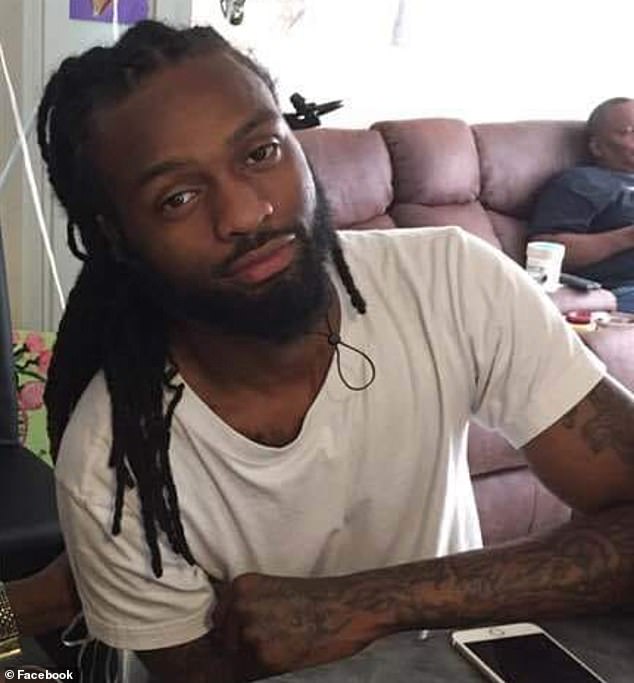 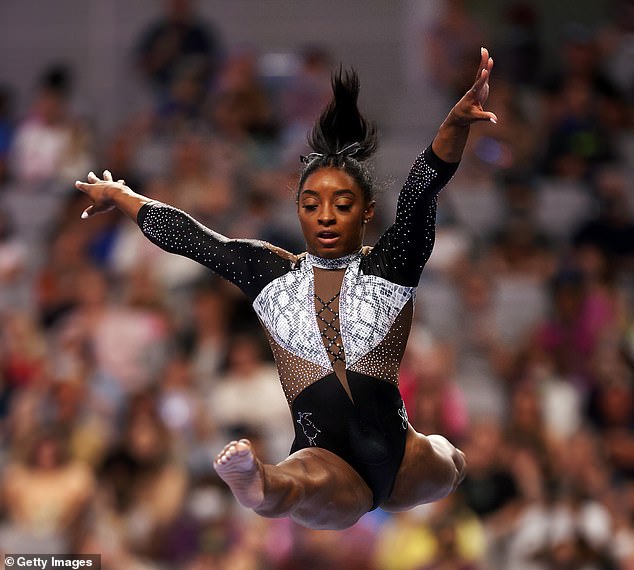 Following her brother's arrest, Biles released a statement saying her heart went out to the victim's families and she was struggling with the news 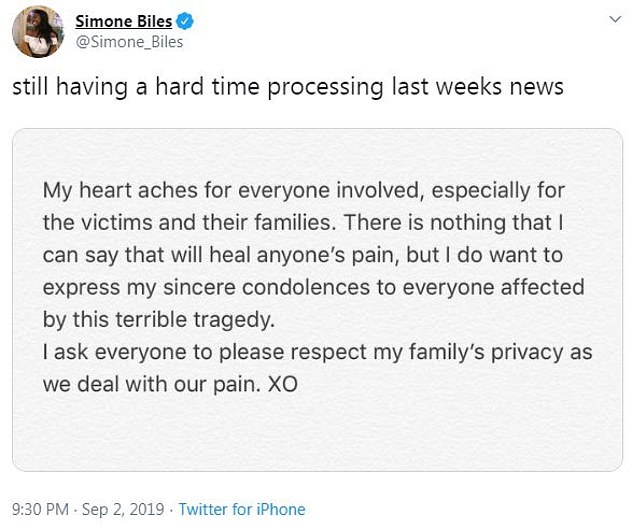 Simone Biles tweeted a statement about the killings, adding that she was 'still having a hard time processing last week's news'

A mistrial was declared in Biles-Thomas' case in May after jurors said they were inadvertently given legal briefs between the prosecutors and Biles-Thomas' legal team.

Following Tuesday's decision, Patituce said Judge Synenberg paid 'incredible attention to the evidence presented, and that the state failed to prove its case.'

'We don't fault the victim's family,' he continued. 'This was a horrible event.

'We don't fault the victims' family for acting out.'

In 2016, Biles' mother Shanon told Dailymail.com that her family were forced to step in and help care for her four young children due to her drug and alcohol addictions.

They had spent their early years in and out of foster care in Ohio before Simone, then six, and sister Adria, were adopted by their maternal grandfather, Ronald Biles, and his wife Nellie.

Shanon's eldest son and daughter, Tevin and Ashley, were taken in by Ronald's sister and are thought to have been raised in Cleveland.

Comment by evolution on June 19, 2021 at 7:37am
Moderator you need to stop this spaming though.