Look what the COPS did to this innocent elderly man {VIDEO} 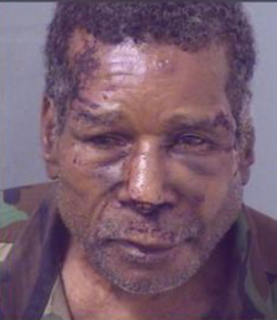 Sixty-four-year-old John Monroque was arrested back in November of 2019 and was left with a battered and bloody face, which can be seen clearly in his mugshot taken from that very night.

Monroque says he’s disabled, but used to work for the City of West Palm Beach until he hurt his back. Since then, he’s helped the owners of Food Plus from time to time.

Monroque has known the owners of Food Plus market in West Palm Beach for years.

According to Monroque, he went back to the market to get some cigarettes for a friend and was stunned when one of the owner’s sons called the police.

Monroque described the moment two West Palm Beach Police officers arrived. “When the police walked in, he told the police, ‘I don’t even know,’” and I said, ‘What did I do?’”

Two officers responded. They asked him for his ID, and while they were running it, Monroque and an officer were left alone. According to Monroque, he was upset police were even called in the first place.

Then, Monroque went up to the officer to ask for his ID back. “I go, ‘How long are you going to keep my ID for?’” he recalls.

That’s when the unexpected happened.

“He got behind me and jumped on my back, punched me in my face, and then slammed me on top of the car,” says Monroque.

In police body camera video, Monroque’s back is turned away from the officer. Monroque says not only was he not resisting, but he didn’t even see the officer coming.

However, in the police report, the officer says Monroque was yelling profanities at a pedestrian, and that is when the officer grabbed him from behind and put him on a patrol car to arrest him.

But according to Monroque, he was just speaking to a good friend he knew.

Despite this, the police report states Monroque was not cooperating, resisting commands, and even went to reach for an officer’s gun holster, magazine, and taser.

West Palm Beach Police say that while he was bleeding on the ground and punched in the head multiple times, the arrest was warranted, as he continued to yell obscenities at the officers and even spit blood at them.

Only a legal advisor for the department that looked at the body cam video has said the force was justified, not a review board. The FDLE will obtain this video to investigate.

However, Monroque is still demanding answers, and is seeking for justice to be served against the two officers.

“Be good, and stop being evil,” he says.

Negros waiting for Biden and nancy pelosi to rescue them, we are going to start picking who we march for, any one who rely on those white folks dont need BLM, let white people save them

Comment by Lizzette on May 25, 2021 at 2:58pm
They never STOP WITH THIS BARBARIC BEHAVIOR. WTF IS IT GONNA TAKE FOR US TO OPEN OUR EYES AND SEE HOW EVIL THESE .....

The black panthers have been abandoned by the black community, they pick their fights wisely, just like the nation of islam they do not fight for no one but their own kind, because they know they will be standing alone especially in a country that hates muslim

Where are our Black Panthers when we need them?

Like i said made faggots who still fighting their demons, taking it out on innocent people, niggers keep saying whats dont make sense, its easy to tell when you have slave niggers in the room still repeating what the white men tell them to say because they cannot think any further, Trump this and Trump that its not helping, do you see how easy it is to show that you are conditioned of a slave, Trump is no longer here and you are still repeating the same thing white people told you too, now how about your officials, you have a new president he just signed a new Asian bill into law how come he is not addressing these issues, stop being a n***** stand up and take charge and make smart political decisions, stop living under white people spells, if for the next 3 years your only blame will be Trump than what's the purpose of voting for a new president, if you have a While democratic congress who do not need the approval of republicans in order to pass laws what are they doing, when will they address those issues, like i told you niggers before your problem is bigger than Trump he is only one man, you were suffering before him, during him and after him, start making decisions like the jews they are not loyal to no one, stop wiping white peoples ass, each time i see things like that i say thanks to all the niggers for voting, because of your poor decision and choice in voting innocent people like him have to suffer under the racist system that the democrats have been protecting for so long, do you actually think they would be going to all that back and fourth if black cops were terrorizing the white community like that, they would been pass laws, by the way where are your black cops how come they are always silence? Wait dont answer that, niggers have no say in anything, your negro law makers are useless, they cant do s***, they are just an advertisement poster collecting checks so white people can say they have black people in government, dumb niggers

Comment by James on May 21, 2021 at 11:48pm
C this way I say bout us the ltaka beating he brother gif no reason yet the nigers stand there and not kill that ltaka so ways the outcry for

Comment by vaughn mitchell on May 21, 2021 at 10:52pm
Florida, ratchet ass state, home of Trump. The most racist state in the country.googled it. Which state has the most hate groups. Florida #1