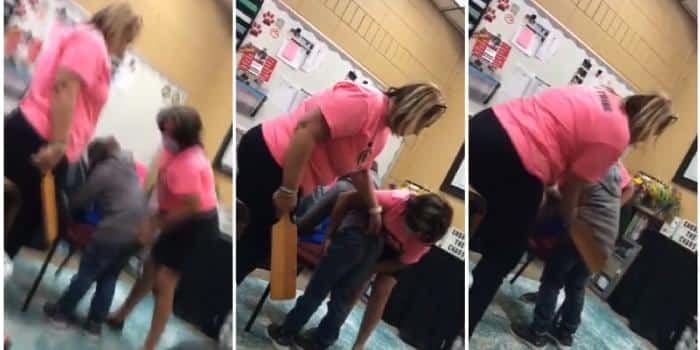 A lawyer for the 6-year-old and her mother explained to TMZ that the little girl can’t even sleep, cries constantly, and feels generally terrorized by what happened.

Brent Probinsky, the family’s lawyer, also tells TMZ that the girl’s mother calls him twice a day in distress about the school beating that happened on April 13. The girls are so riddled up from the incident that they even had to get a therapist and their first appointment should be this week.

The attorney also explained to TMZ why the mom just stood by instead of stepping in as she watched her daughter get beaten by the Florida principal. He says she and her husband are undocumented immigrants from Mexico, and she was afraid she’d get deported if she reported it. In the new video obtained by the news site, you can see her hesitation first-hand, showing the principal take an authoritative tone right from the jump.

That's what we need more of......AZZ beatings. These kids are out of pocket for their rudeness.

too me  that principal  shouldnt hit  that child . cuz i kno  she  didnt get paid  to  hit   nobody child,  and   child mom shouldnt be worrying about  gettin  deported  she  should be worrying about   whats happen too her child   school cant deport  the mother.,  mom should stand up for her  daugther  n take  action