Black Billionaires Club: Why These are Forbes’ 7 Richest Black Americans in 2021 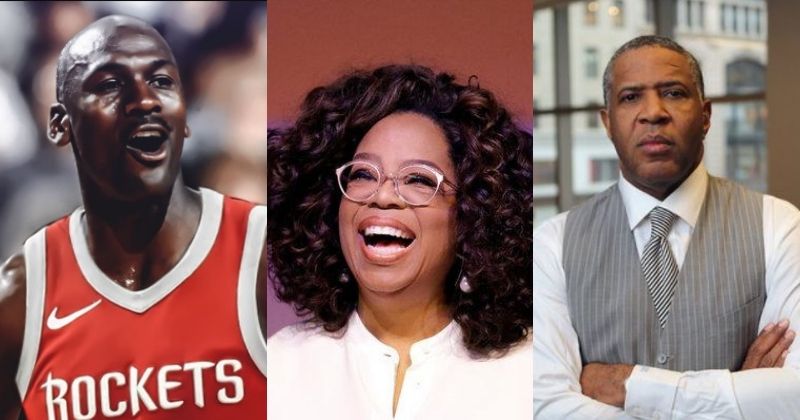 Forbes has come out with its newest list of wealthiest Americans, and the top Black earners are pretty much who you’d expect: Oprah Winfrey, Tyler Perry, Jay-Z, Michael Jordan and Kanye West, as well as businessmen Robert F. Smith and David Steward – America’s lone Black billionaires.

To inspire your journey towards gracing a Forbes list like this in the future, here are some words of wisdom, or biographical stories about how their billions were made.

At the top of the list is businessman/investor Robert F. Smith and his net worth of $5.2 billion, making him the richest Black American. He ranks at 526 of the world’s richest individuals.

World Wide Technology co-founder David Steward follows with a net worth of $3.7 billion. He ranks at 792 world’s richest people.

Oprah Winfrey has a net worth of $2.7 billion. The talk show host and philanthropist is the 1,138th richest person in the world.

NBA Hall of Famer Michael Jordan has a net worth of $1.6 billion. He currently owns the Charlotte Hornets and is the 1,802th richest person in the world.

Rapper and businessman Jay-Z’s net worth sits at $1 billion. He is the 2,336th richest person in the world.

Producer and actor Tyler Perry has a net worth of $1 billion.

Comment by mr1stroke on April 9, 2021 at 5:50pm
caribmama do understand 90% of people of color today just like to be around white people to feel important, to have power, its time for many to sit back and observe blacks in America, they want to have money but look at where they live, look at the people they do business with, they dont own nothing, they just have money, now the reality of this life is if all you have is money you only have bragging rights.

You can go broke in one day, we can start with law suits or the robbery team of the government the irs seized all your accounts, but when you own assets you dont have to start all over again, you can keep going amd continue, take a look at people like Trump he always file bankruptcy on paper claim he is broke to protect his wealth, he owns real estate and other businesses not under his name, he admits it but idiots dont pay him no mind when he said he used other names to pay cheap for land or building, as soon as i heard that i have been using that dame tactic in ways i cannot put out there

Jeff Bezos and warren buffet are some of the people who do the same thing, now take a look at the rich negros they can brag they have money or businesses, but the community is poor they dont own nothing when you drive to the community you can say this is black own, they dont keep their community employ in their wealth, thats why black people are still begging for jobs

How about those in politics, what power do they hold, what can they do, what have they done, where are the black law makers, what laws, policies and bills have they pass or change, why do black people still begging white people for mercy? I mean if any one has any information that can compare up to at least 50 to 60% of what we are talking about, please share the information so we can research and learn

Right about now if you take Ny the blacks out there are getting f*** and rape with no grease by the jews or indians landlords with high rent, they barely own and the law makers are abusing them, setting up laws that are against black people, so that billionaire s*** sounds good to people who are desperate, poor and have nothing because dollars mean everything to them, but it holds no power or authority, when the last time you see a black businessman or ceo testifying before congress? When you see those white businessmen in capital hill, its being done for a reason, its to keep them powerful and let the world know they have friends in high places, you dont see them going to jail do you, my goals is to put my self in the young black millionaires category in the next 2 or 3 years if not next year and change life the way i see it s***, i might run for office, just watch me, thats why i live away from the crowd i do ky dirt by my lonely, i dont give the public ways to betray me but i welcome them with what they know, this is how i win

What's the use of being a black billionaire if you can't make things happen?

Comment by mr1stroke on April 8, 2021 at 12:51am
And still dont have any power over government, they sure can help place white people in office to rule but cannot get their own or change any laws, Georgia just proved it yo you