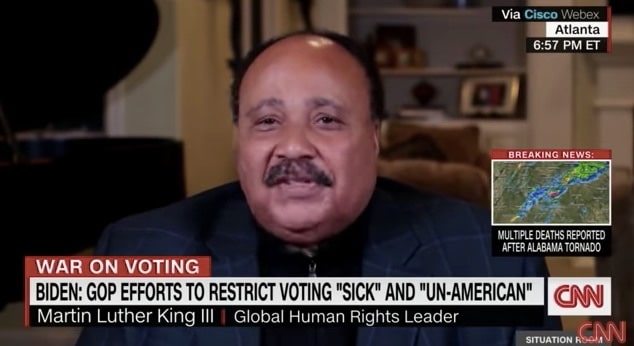 You knew Republicans in Georgia would move heaven and earth to suppress the Black vote after taking an “L” in the last election. Thanks to folks like Stacey Abrams and a longstanding grass roots effort to turn the deeply red state purple in 2020, Biden secured the state’s 16 electoral votes, and Democrats Raphael Warnock and Jon Ossoff nabbed runoff wins to give their party control of the U.S. Senate.

In response, Republicans in the state legislature have passed new laws designed to make it harder to vote. For example, a photo ID will now be required to vote absentee by mail, after more than 1.3 million Georgia voters used that option during the COVID-19 pandemic. The new bill also cuts the time period people have to request an absentee ballot, and limits where ballot drop boxes can be placed and when they can be accessed.

The bill also replaces the elected secretary of state as the chair of the state election board with a new appointee of the legislature, after Republican Secretary of State Brad Raffensperger refused Trump’s request to overturn Georgia’s election results. Additionally, the bill allows the board to remove and replace county election officials deemed to be “underperforming.

The son of the civil rights legend told CNN people must, “be more vigilant — black people, young people, older people, poor people are going to have to be more vigilant.”

King III continued, “It’s unfortunate this trend is happening across America, and over 40 states across our nation. There used to be a time if you called someone a racist, they would want to retreat. Now it seems to be alright to be a racist. It’s a sad day in America, quite frankly.”

Host Pamela Brown then asked if the new voting restrictions were a form of racism. King III responded, “Oh, absolutely. In the communities of color, and many other communities, after church — ‘souls to the polls.’ People are led to the polls. Certainly we can praise God all the time, and go to church on Sabbath Day, but also, we can participate in the government.”

Watch a clip of the segment below:

Comment by mr1stroke on March 29, 2021 at 5:46pm
Thomas Nesbitt the niggers who voted against Trump voted against their selves, but they dont know or even understand what they are doing, they dont know anything about biden all they told them is to vote for biden so they did like monkeys, niggers dont realise Trump is a white people's problem, they voted against Trump to make white people comfortable and they already forget about niggers. 85% of the niggers help vote Trump out but 25% cannot get a police reform bill to pass, they are helpless to any policies that are against them, if you ask the niggers why cant the democrats change the laws they will tell you its because republicans always block them, because again thats what they tell them to say, now ask those same niggers how many republicans voted for daca and how come it was passed and renewed over and over, ask them how many republicans voted for the gun laws and how they were passed, ask those niggers how come Obama did not take executive order to change the filibuster laws, how their Congress are not willing to change the filibuster laws not even biden is willing to do so, when they asked him he avoided the question and said he will work pn every agenda, but noy one is about the black community. If only they understand these lawd they would realize why the democrats have them marching and begging, these laws are set to keep niggers in modern day slavery and the democrats are the masters, so saf how dumb the niggers are but think they are doing something great on the streets dancing like a bunch of slaves for biden, dumb niggers

On your first comment where you say its not about black white its about how much money you got, i agree with every thing you say except the money part, in America it does not matter how much money a black man has in the eyes of white people they will always be niggers, they will not give them any power, why do you think niggers are crying about the new voting laws, Oprah has money, magic and shaq all have money, but they cant say s***, if they even budge they will take away their money until they beg, thats why those niggers dont even talk about it they dont want yo go broke, steve harvey said to Monique in his show on national tv f*** every body else its about his money, all those niggers have powerful people in politics and in government they still cant say nothing, they have to stay on their lanes and play their role, its sas but niggers dont have any back bones, they are forever under white peoples spell thats why many are comfortable selling the community, their only power is over their community thats why they tell the people what to do and who to vote for.

Comment by Thomas Nesbitt on March 29, 2021 at 4:53pm
Your Black "niggers" who voted for Trump and fought for him after that attack on the capital in January and was call this pandemic " China virus" is showing that we don't have any say in this system we live in. Especially Black American men. They love it when black people are hurting and killing each other and not working together as other race in this country.

Comment by Thomas Nesbitt on March 29, 2021 at 4:40pm
We have to know and see as Black Americans that this going on is beyond Black against white. If you're not making above or beyond a certain amount of money you just don't have a say about anything going on in this country. I don't care how much you vote. They fight for these Asians because these businesses that Asians have in America and how much money they make. This is a diversion to get people to start buying more food from chinese restaurants and other Asian businesses in America. All of these government leaders make it look like they are fighting one another in the political system, but are just working together to take away all saying from anyone who was eligible for the $1400. Even your rich Black Americans. They can talk about Black Lives Matter all they want and donate, they know how to take advantage of their tax write off.

Comment by mr1stroke on March 28, 2021 at 1:54am
Allen E. Do you think these dumb niggers ever read, do you think they care to research, those are some od the dumbest group i have ever seen when it comes to politics and biden said it to the hispanics tv, but they did not care, they repeat anything white people tell them, they do anything white people tell them to, when the last time these niggers chose and vote for their pwn candidates? They vote for any one the white people tell them to, and even white people picked the same person who is hurting the community niggers will still be convince, they dont have a mind of their own, ask them about Trump they will tell you the same thing the white tell them to, they dont have their own answers, they will tell Trump is a racist, how come they did not say thay before Hillary and Nancy Pelosi told them

But the white democrats who are busy passing laws for illegal mexicans are not racist, right now niggers can forget it, they will confuse niggers make excuses and distract them with thay asian and gun laws s***, 3 years from now they will tell niggers to be patient and trust in the system

The 2 things that are helping those white democrats to stay in power and keep niggers in slavery are the greedy so call negro leaders who will foe ever sell the community and the uneducated niggers, they think buying some education from some white university make them special, how is that working for you when you have a 4 year degree in a professional field and you are a ups driver, is that the condition of that degree that you paid for, dumb niggers will never learned thats why we need to separate our selves from them

Comment by mr1stroke on March 28, 2021 at 1:42am
Niggers are crying but is the part that is proving that many of us are right, niggers are slaves, you have the first black the first black that, you have all those black congress and senate people, you have black judges and law enforcement for all those years and they could not stop that, now you are begging and crying like the 60s, niggers arw the weakest group, do you think that would happen to the jews, look at the asians community they start a movement in a week they are changing laws and policies, how does that happened, why are you still marching and begging?

You can come on here and argue with me, you can make all the excuses, at the end you are still looking stupid and begging, niggers will always be under white people's spells, and easy to conditioned, this week they had every one on social media supporting and posting stop asians hate, it was a campaign for that day, and niggers were happy doing it on social media instead of crying i laugh to see hoe proud niggers are fighting other peoples battle when they cannot win their own, when was your stop hating black day, where was the stop hating black live matter day, where was stop police brutality in the black community day, where was those asians people when they watch innocent black men shot and killed by cops on live tv? You wont do it unless white people tells you to, your own causes dont matter, youre too busy crying for attention, you even change police reform, wait how come biden did not mention niggers in his first press conference this week when they asked him about his major tasks? Dumb niggers your master dont even love you, just be happy with that $1400

Before cheering for biden...watch this docu...many don't research,so they fall for anything. I DON'T VOTE AND I AM NOT A POLITICIAN...BUT I RESEARCH....SO,CHECK THIS OUT AND BE INFORMED OF THE TRUTH!   https://youtu.be/r0xPzC44GnU

Comment by vaughn mitchell on March 26, 2021 at 7:55pm
This is some Republicans, racist, s***, this is going back to Jim crow days. If the white house, and the supreme court can't stop this, the next step for black people to do is boycott, all white business, blacks, boycott, all white sporting events. This,is some straight outright racist s*** to block black people from not voting cause Georgie, turn blue.