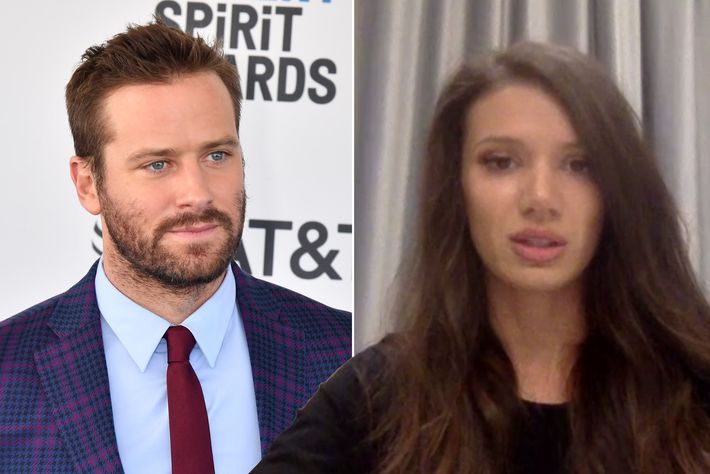 Hollywood actor Armie Hammer has been accused of violently raping a woman for four hours when she was just 20.

The accuser, known as Effie, said that in 2017, after meeting the Call Me by Your Name star via Facebook months prior, she said they briefly dated while he was married.

Speaking at a virtual press conference earlier in the day, Effie claimed that Hammer had raped her for four hours, during which he “repeatedly slammed” her face against a wall along with other “violent acts.” “I thought he was going to kill me,” she said.

“During those four hours, I tried to get away, but he wouldn’t let me,” said Effie. “I thought that he was going to kill me. He then left with no concern for my well-being. I was completely in shock, and he couldn’t believe this, what I loved. He did that to me.”

Several women have stepped forward to accuse the star of everything from rape to sexual cannibalism over recent weeks.

The LAPD has confirmed the actor is officially under investigation.</p

The Mandalorian (2019)
TV-14
Sci-fi & Fantasy, Aksi & Petualangan, Barat, Drama
35m
User
Score
Bounty hunting is a complicated profession.
Kilasan Singkat
After the fall of the Galactic Empire, lawlessness has spread throughout the galaxy. A lone gunfighter makes his way through the outer reaches, earning his keep as a bounty hunter.

Here we f****** go again!!!!!! I got violently raped, but I waited years before coming forward.  These chicks are nothing more than groupies and gold diggers, that give good women a bad name.