'Snake oil salesman', 55, is arrested for traveling around America 'injecting patients with an unproven COVID-19 vaccine for $1,000 a shot' 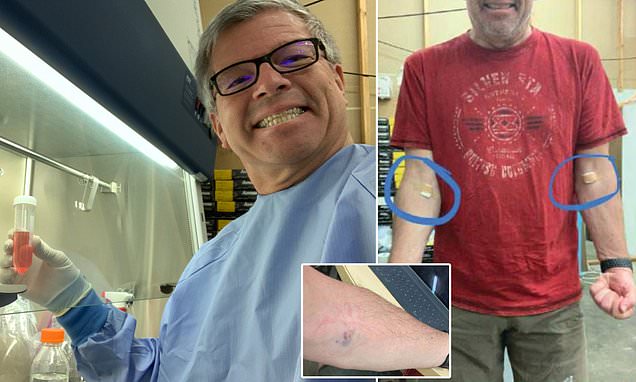 An entrepreneur in Washington state has been accused of injecting patients with an unknown substance he purported to be a CORONAVIRUS vaccine for up to $1,000 a shot.

Johnny Stine, 55, was arrested on federal charges for 'introducing misbranded drugs into interstate commerce' last Thursday, the Department of Justice said in a news release.

Prosecutors said Stine, who bills himself as the founder and president of a biotech company called North Coast Biologics in Seattle, Washington, launched his vaccine scheme last March when the coronavirus pandemic took hold in the US.

In online postings dating back to March 2, Stine advertised his fraudulent 'vaccine' with a price range of $400-$1000 for each shot, a criminal complaint states.

'Untested, untried and potentially unsafe – this defendant was injecting people with an unknown substance claiming it was a vaccine for COVID-19,' US Attorney Brian T Moran said. 'Preying on our fears in the midst of this pandemic is unconscionable.'

It's unclear what was actually in Stine's 'vaccine', or how many patients paid for and received it. Stine claimed in conversations with undercover agents that he was traveling around the country administering his jabs.

The investigation revealed that in addition to peddling inoculations for coronavirus, Stine also 'preyed' upon cancer victims by offering them vaccines he said could eradicate malignant tumors. 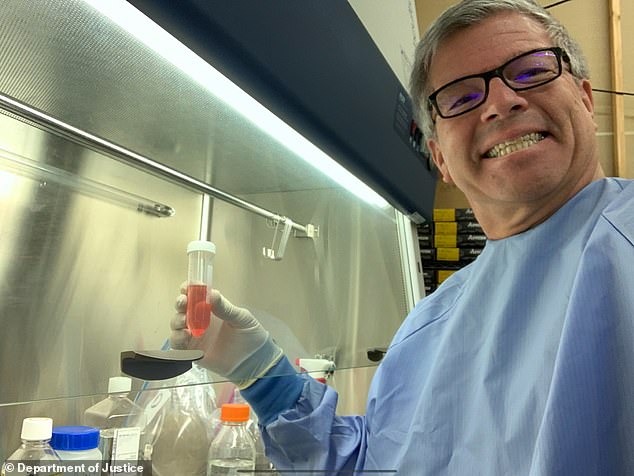 Johnny Stine, 55, was arrested on federal charges injecting patients with an unknown substance he purported to be a coronavirus vaccine. Stine is seen holding up a solution believed to be his vaccine at his lab in Redmond, Washington, in a photo from the DOJ 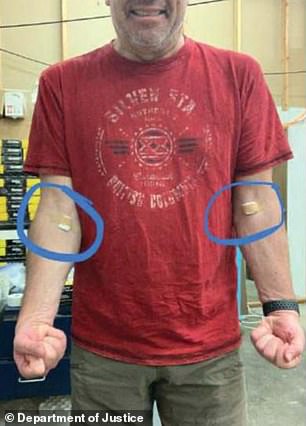 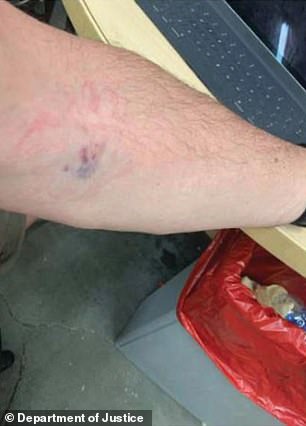 Federal authorities obtained these two photos of a man Stine allegedly injected with his unproven COVID-19 vaccine last year. In online postings dating back to March 2, Stine advertised the shots with a price range of $400-$1000 each, a criminal complaint states

The Food and Drug Administration was alerted to Stine's online postings about the COVID-19 infections in early March and sent an undercover agent to investigate, the DOJ said.

Stine allegedly told the agent that his company focused on creating vaccines to fight cancer tumors, and that he used a similar method to develop one for the coronavirus.

A few weeks later on March 27, the FDA received a complaint from an 'area resident' who said Stine had injected their friend with his vaccine.

In another meeting with undercover FDA agents in early April, Stine indicated that he had been traveling to other states, including Texas and Arizona, to administer the vaccine to customers. At that point he allegedly offered to go to California to inject a family member of one of the agents. 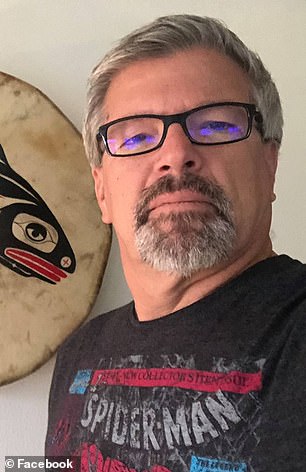 The Washington State Attorney General's office issued a cease and desist letter to Stine in late April ordering to stop advertising and administering the vaccine.

'Rather than be deterred, Stine indicated it had just increased demand for his injections which he now called "immunogen" instead of a vaccine,' the DOJ said.

Two months later in June, Stine agreed to stop promoting or selling the vaccine under a Consent Decree with the state AG's office.

But it appears Stine didn't adhere to that decree. In August he coordinated with an undercover agent and traveled to Idaho with the intention of vaccinating the agent, before being intercepted by law enforcement.

Agents seized his stash of vaccine and raided the Redmond warehouse where he claimed his research was conducted.

This month, authorities were informed that at least one person vaccinated by Stine had been hospitalized with COVID-19.

Photos included in the criminal complaint showed Stine holding up a test tube with an orange liquid believed to be the 'vaccine'.

They also showed a man holding out his arms after receiving two jabs.

'The very idea that someone would prey upon fearful people seeking a COVID vaccine in the midst of a global pandemic is not only despicable, but potentially deadly behavior,' Special Agent in Charge Robert Hammer, who oversees Homeland Security Investigations (HSI) operations in the Pacific Northwest, said in a statement.

'Equally appalling is the exploitation of vulnerable cancer patients and their families, desperate for treatment.

'Snake oil salesmen, such as this, who endanger consumers should take this arrest as a stern warning.

'HSI, along with our law enforcement partners, remain dedicated to protecting the community from these criminals and the dangerous substances they sell.'

The criminal misdemeanor charges filed last week are unrelated to the civil cease and desist letter and civil Consent Decree, the DOJ clarified, suggesting that Stine could soon face more charges for violations of those orders.

If convicted of the misdemeanors, Stine could face up to one year in prison. 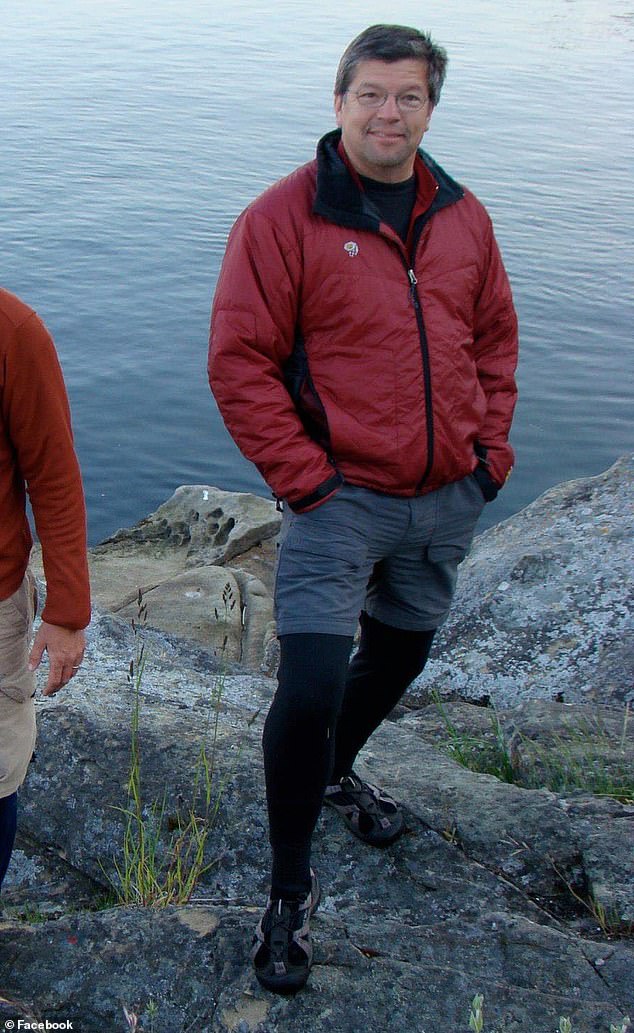 An investigation revealed that in addition to peddling inoculations for coronavirus, Stine also 'preyed' upon cancer victims by offering them vaccines he said could eradicate tumors

Stine spoke out about his brushes with the FDA last September, bragging to Forbesthat he had foiled the agency's attempts to stop him from selling his jabs.

Describing how he discovered that two women seeking his vaccine were undercover FDA agents, Stine said: 'It was obvious.'

He also downplayed the potential danger of his unproven jabs.

'The biggest issue people had was because I charged for my approach, which I thought that I should be able to do since I'm a longtime trained microbiologist and since I was between collaborations with my therapeutic antibody work, I needed the money,' he said. 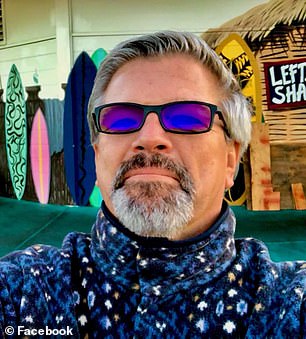 Stine spoke out about his brushes with the FDA last September, bragging to Forbes that he had foiled the agency's attempts to stop him from selling his jabs

'But it was only for family and friends, it’s not like I was able to mass produce or mass market.'

He said he was motivated to find his own vaccine because he knew the FDA's extensive research requirements - with multiple stages of rigorous trials - would dramatically delay the introduction of an official vaccine.

'I thought it was immoral to tell people to wait two years for something that is available today, today while people are dying,' he said.

Stine, who was described by one friend in a search warrant as a 'mad scientist', started his career in microbiology as a scientist for a Bothell company, according to the Seattle Times.

In 2005 he launched a biotech firm called Spaltudaq, with a goal of creating targeted cancer drugs with limited side effects.

Within its first two years the company raised $29million in venture capital funding and expanded to include research on infectious and autoimmune disease antibodies.

The company's name was formally changed to Theraclone Sciences in 2009, after Stine had already moved on to form his new venture, North Coast Biologics.

According to the Washington Secretary of State's website, North Coast Biologics has been 'inactive' since 2012, but the state's Department of Revenue site still lists it as 'active' and still has maintained social media pages under its name.

I am surprised that people are dumb enough to pay 1000 dollars to this anthole.

A Trumpturd no doubt fleecing the Turds.

Tyrone lol now only you said it all but you also ask the questions that those fools are not smart enough to ask, thats why some of us are riding it, you see how much money he as charging for his vaccine lol Dr Fauci aint the only one with the vaccine

Anyone that lets that fool inject them with anything are just plain ole dumb and if they die, they actually paid for their won deaths.  This is a big hoax that's been played on the whole world.  All of a sudden, a cold is causing such panic.  If anyone has ever had a cold or the flu, they've had the big C-19.  When they administer the test, they're putting the virus in you and when they give the vaccine, they're also giving you the virus along with other illnesses such as HIV, Lupus etc. etc.  They even tell you it doesn't prevent the virus.  If they haven't created a vaccine for the common cold, how then can they heal anything else?  People gotta wake up and stop being sheep.

Lol i laugh at things like that i dont feel sorry for no one, covid is a hustle for any one who is smart enough to survive, the same idiots who refused to take care of their health, always talking they have to die some day are the same one who are so afraid to die now, they will take anything because they are so afraid of that virus, im about to start selling acid in the bottle and tell them to inhale it for clean Air, damn dummies, thats ok im sure he made enough money to get out of prison, sunday someone calls me due to emergency they had a leak in their house, i said i dont do business on sundays she said it was an emergency, i said if i come to you ill charge you traveling fee whether or not i can fix the problem right away. My fee to come and inspect thw problem $150 about 10 miles i need half deposit through zelle or paypal and the rest before inspection, i saw the problem, went back to my truck came back in, stay on the phone for 20 minutes, cut the pipe and remount an new piece in about 15 minutes, made a cool $650 on a sunday, dont f*** with me, i make sure i am useful to society but society will pay like they weight