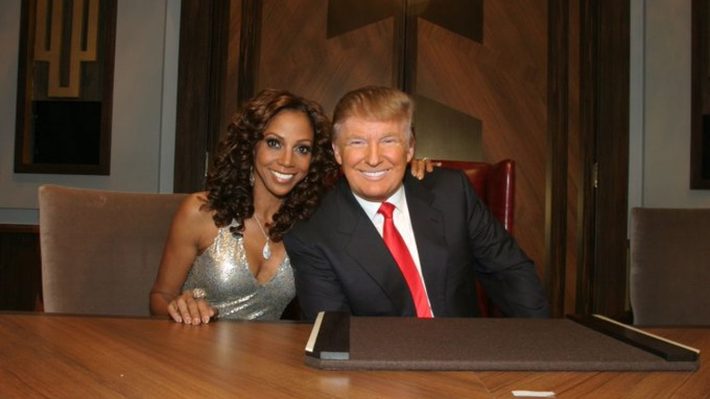 Peete recalled the moment on Tuesday during an interview on SiriusXM’s The Karen Hunter Show. She claims the president used the slur when it came down to choosing a winner of the competition between Peete and singer Bret Michaels. Peete didn’t actually hear Trump use the N-word, she found out about it after taping had finished.

As noted by MadameNoire, Noel Casler, a comedian who worked on the show, revealed it in a tweet last year, but this is the first time Peete is speaking on it publicly.

“I found him to be kind of piggish and bullish and stuff, but I didn’t find him to be just this…who he is now, I did not see that,” Peete said about Trump.

“Shortly after the finale, rumors started going around that he had tossed out an ‘N-word’ referring to me. “And I was like, ‘huh?’ When the producer told me when it happened, during the finale, I remember the moment. I wasn’t in earshot, but I could see them deciding between me and Bret Michaels,” she added.

Recounting the N-word moment, Peete said she saw Trump “talking with producers and they’re really animated and that was when I heard that he said, ‘They want the ‘N-word’ to win.’ Because I guess the network wanted me to win or me to be chosen and Trump wanted Bret.”

“And the quote was he ‘wanted the N-word to win’ and I heard it and you know, how could anybody believe that he wouldn’t say something like that? I firmly believe he probably uses that language all the time. And then by the time it sort of started resurfacing, I didn’t even really address it too much because I felt like, what difference is it going to make? People have accepted the things that he said that are so vile about so many other people, what difference is it going to make if he said that about me,” Peete said.

To think that it was kind of 50/50 with the popular vote. Half of the country thinks the things this man did was okay. It's totally shocking! And most are bible thumpers. Guess they don't live by the good book.

Comment by vaughn mitchell on November 18, 2020 at 3:47pm
Well he has some of the black men, and women who voted for for that because they have no problem backing him.