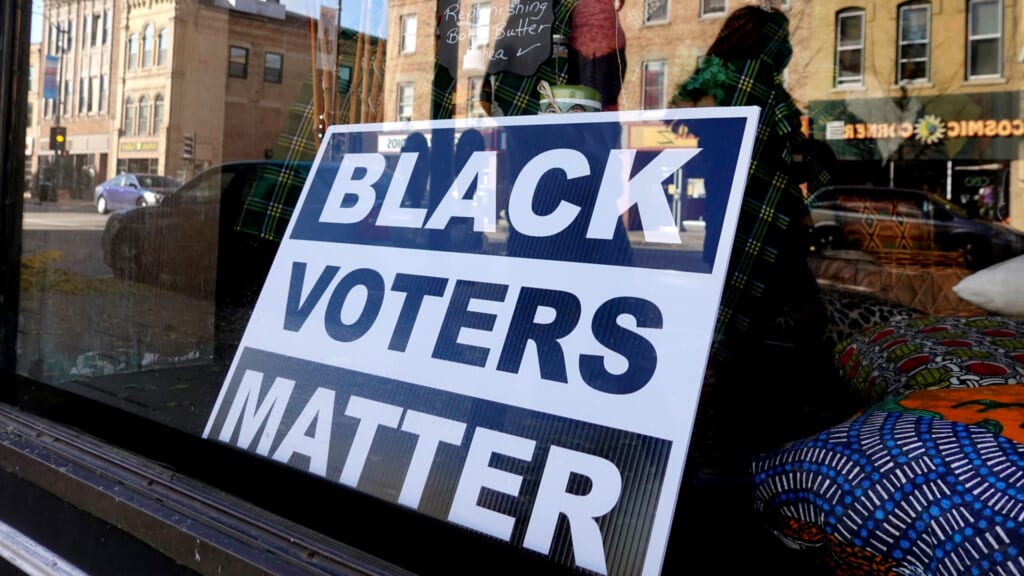 A sign encouraging Black people to vote sits in the window of a downtown storefront Sunday in Racine, Wisconsin. Experts say Russian disinformation campaigns are again targeting Blacks and Latino voters, and they may be working.

A Senate report from 2019 notes that Russian operatives working for the Internet Research Agency used social media posts with an “overwhelming operational emphasis on race… no single group of Americans was targeted… more than African Americans.”

That technique, via the use of Facebook pages, Instagram posts and Twitter missives, has again been utilized this year seeking to encourage apathy among Black voters to discourage them from voting.

A recent NPR report noted that some of these efforts included the creation of memes stating beliefs like, “Democrats and Republicans are the same. There’s no point in voting.” Another claims “Obama didn’t do anything for you during his term, why should you vote for a Democrat this time around?”

The exploitation of Black American distrust in the electoral system has been widespread in 2020. Some of the sentiments have even been echoed by President Donald Trump himself, who repeatedly says that he has “done more for Black Americans” than any president since Abraham Lincoln.

Win Black co-founder Andre Banks called the latest Russian disinformation campaign similar to a poll tax, a “sustained campaign targeted at Black Americans — and often brown Americans as well — to limit our political power, to limit our ability to shape the decisions that are made in this country.”

The Trump campaign strategy taps into long-standing beliefs by some African Americans that nothing changes for our community, no matter who is president. These campaigns, Banks said, turn conversations “toward a deep cynicism” that makes people less inspired to participate in the electoral process.

Other Russian efforts have been geared at inspiring the interest of Blacks, particularly Black men, in supporting Trump’s re-election. And, as expected, they’re not going unopposed.

Win Black is a current drive meant to fend off the widespread online disinformation that dominated web circles four years ago. In late October, LeBron James‘ More than a Vote campaign tweeted a video narrated by popular talk show hosts Desus and Mero that prompts voters to understand the disinformation dissemination actively underway.

In response to the video, one user replied with a photoshopped picture of Donald Trump and James appearing to be smiling and standing together.

Commented another user: “Case in point.”

D. Hall and ou are a n***** because real black man know who they are and the difference between black men and niggers thats why Malcolm X was teaching the difference and many of you niggers hated him, thats why the white men send you niggers to assassinate him, since Lincoln is your hero. Tell me where did lincoln got his teeth from? Licoln was a slave owner you dumb n*****, you slave n***** and yes niggers like you need to be hang you nighers spread too much hate in the community, uou have been doing so much since you have been black but look at the community, you can tell a n***** still blaming white people in 2020 but will go out and vote for the same racist who calls you animals, you dumb n*****

D. Hall i wont even read your comment but once yiu ask what have i done, i will prove you are a n***** who free load on behalf of the rest of us, now when the last time you were at a rally or a funeral for those victims and who was it and where and ill tell you when because last time when i was coming to NY to those funerals i posted it on here, when i was providing vehicles to deliver medication and hire drivers to do so at the senior home where was your n***** ass, when i sit at the court house to bail out innocent brothers who cannot make it home for acrime they did not commit and cannot afford bail where were you, this year already i already have my zoom court code and if to log in so you can view the cases and post bail, at the work house you can make one phone call and have someone bails pay, but im sure you know all about that, now why dont you tell us what you have done for the black community and tell us where since you so black

Tthats why i moved out the community and do not interact with niggers, you realize all you niggers can do on here is come on the attack. You niggers never have a solution to solve nothing when the last time you niggers suggest anything you niggers will die like dogs niggers like you will never be nobody. You will die unkown paying your last dimes to the jews or live in the project apartment that the white men provide so he can keep you in slavery you niggers are too hateful, why dont you show us how black you are tell is why you're going to vote  for biden, tell us how good he will be for black people, tell us exactly what he has done for the black community, we dont need an argument from you post the information on here so we can research them and while you at it educate us abput Octavius Catto, but im sure you niggers knew about him thats why you niggers always educate each other and inform each other, you are a porch monkey who will never be nobody. You will die a slave n***** relying on your massa biden, you boy n*****

Once again you show your ignorance. Mr 1/2 stroke. What have you ever done for the black community but get on here and call real black people the N word. What have you done to move the cause forward? Your biggest ignorant mistake is  thinking that black people have ever looked for one party to help or save us. Black people caused the change in this nation. Lincoln (R) would have left slavery intact if it wasn’t for people like Fredrick Douglas and other black leaders at the time. Johnson (D) passed  more civil rights bills than Kennedy. He grew up in Texas and saw first hand the blatant racism. He was influenced by MLK, John Lewis, Medgar Evers, Malcolm X and Millions of us who marched and were beat and killed so that even ignorant people like you could vote. It was a coordinated effort by people in government to kill and suppress our leaders. People like you were used to infiltrate and destroy us from within. Then during the Vietnam war they dumped heroine into our communities to further destabilize. The Republicans you love so much were once Democrats in the 60’s the southern ones were call Dixiecrats and joined the Republican Party when the Democrats were pushed to accept African Americans. In the 80s guns and crack was dumped into your community by Reagan(R) look up Iran Contra. All this being said I wish there were some decent Black Republicans who could push the party to push Republican to stop voter suppression and redlining our community. You need to take that Black Power sign down, you know nothing about it. If you aren’t a Russian troll pick up a book and learn about tru history. Reel back men don’t call each other Niggers, because that the last word many black men heard before they were hanged or shot. GGrow the F*** up

Niggers like you are so proud to live as  slaves, you never questioned how come those white democrats candidates never go to the precincts where the cops arw shootibg those innocent black man, how come they never walked the streets where those young kids are being shot, how come they never walked the community and realise there are no black businesses only project apartments instead of home owners? But instead they go tp your churches pay your pastors so they can convince those idiots to vote for them, thats how much they value your lives, but in the jewish community they walk the streets, they go to the businesses, they taste the bread, you niggers are retarded

vaughn mitchell dumb n***** it is ashamed you come on here run your mouth like a little b**** i have yet to see you share any information regarding politics or voting with yir audience, what purpose do people like your serve wher you live, no wonder that community is so retarded and dumb when it comes to voting, but since you went to a black college why dont you tell the people about "Octavius Catto" and show the people why you so loyal to the democrats and love your massa Biden, tell them why you are a slave n*****, thank God i moved that filthy community

Comment by vaughn mitchell on November 2, 2020 at 3:05pm
Sorry Mr racist white guy, I am not voting for the racist, rapist, thief, liar, and con man that occupy the white house. Black are going to vote , where I live it's 90% black, and the voting lines stretch around the corner since early voting.