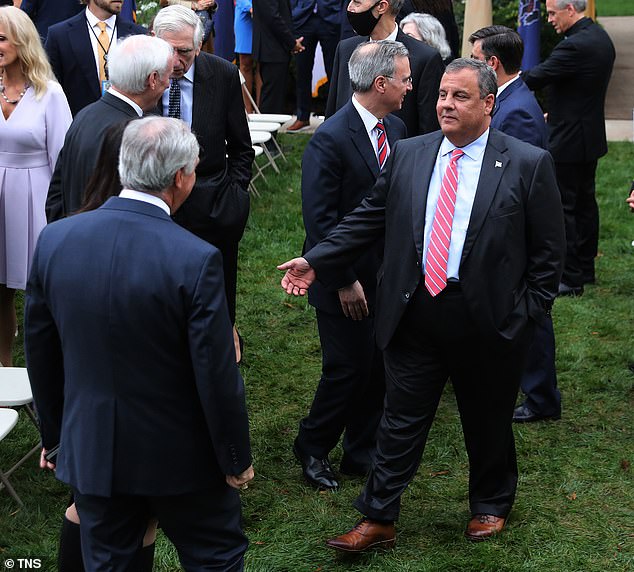 Former New Jersey Gov Chris Christie has revealed he spent seven days in intensive care after contracting Covid-19 from the White House superspreader event and says it was a mistake not to wear a mask.

The Republican, 58, said on Friday that he let his 'guard down' while he was at the White House because he thought everyone had been tested for Covid-19.

Christie, who is a Trump ally, told ABC's Good Morning America on Friday that he has spent the past seven months being vigilant because he is asthmatic.


Following his week-long hospital stay, Christie said it now wasn't enough for President Trump to express approval of masks, saying 'we should be even more affirmative about it'. 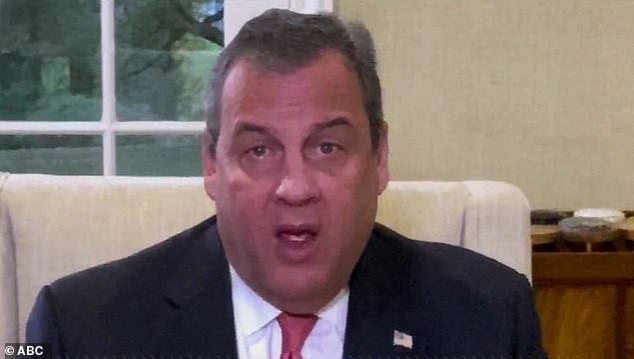 Christie was also among those to help President Donald Trump with his debate preparation in a series of sessions at the White House where no one wore masks.

He checked himself into a New Jersey hospital the same day as his positive diagnosis as a precaution because of his asthma.

'Within 24 hours, I went from feeling absolutely fine to being in the intensive care unit,' he said.

He described the virus hitting him 'like a freight train'.

'All of a sudden I got a fever, chills and body aches. I was wracked with pain and exhaustion.'

Christie said he spent seven days in ICU and was treated with the antiviral drug remdesivir.

The former governor, who was released from the hospital a week ago, now admits it was wrong to let his guard down.

'It was a mistake. I was led to believe that all the people I was interacting with at the White House had been tested and it gave you a false sense of security,' Christie said. 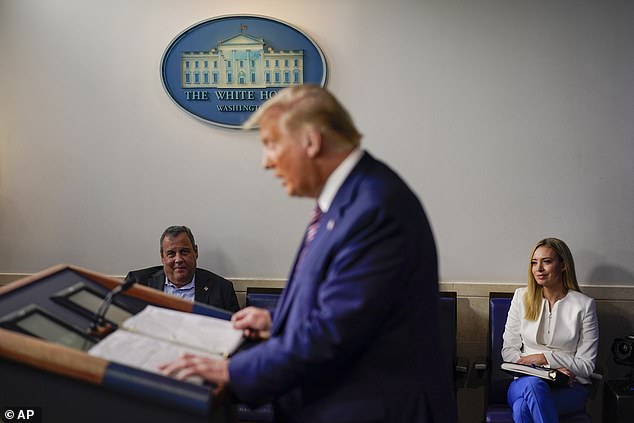 Christie, who is a Trump ally, on Friday said it now wasn't enough for the President to express approval of masks, saying 'we should be even more affirmative about it'. Christie is pictured in the background with press secretary Kayleigh McEnany during a briefing on September 27. Trump, Christie and McEnany all tested positive for the virus

'I've been so careful for seven months because of my asthma. Wearing masks, washing my hands, social distancing.

'For seven months I was able to avoid the virus in one of the worst hit states in the country in New Jersey but I let my guard down.

'It was wrong and it was just a big mistake.'

Christie said his recovery was aided by good medical care and prayers from people across the country.

'What I want people to learn more than anything else is that I was doing it right for seven months and avoided the virus. I let my guard down for a couple of days inside the White House grounds and it cost me in a significant way,' he said.

He noted that White House did not contact him regarding contact tracing. He said it was done instead by his local health department in New Jersey after he checked into a local hospital.

Christie now says it isn't enough for Trump to express approval of masks like he did during his NBC News town hall on Thursday night when he said he was 'good with masks'. 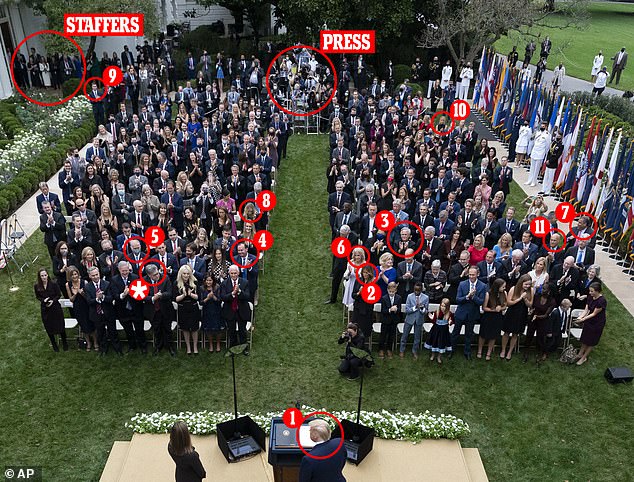 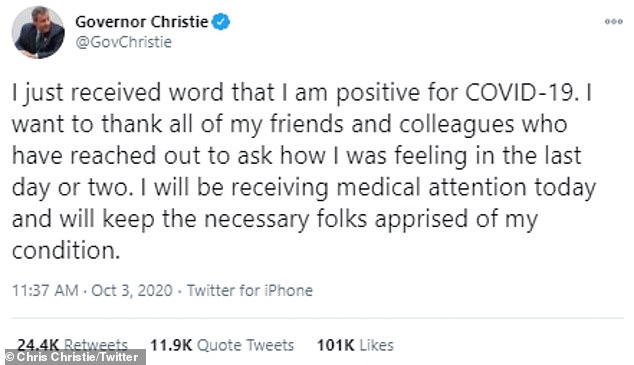 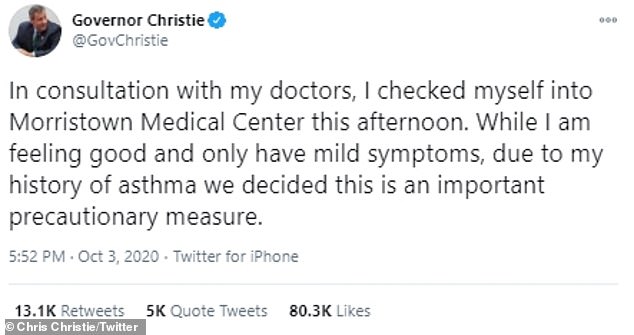 'You know, I heard the president say last night that he has no problem with masks. I think we should be even more affirmative about it,' he said.

'Leaders, all across the politics, sports, the media, should be saying to people, put your masks on and be safe until we get a vaccine that could help to protect us.

'We need to be telling people there is no downside to you wearing masks and in fact there can be a great deal of upside.'

Christie made similar remarks about masks on Thursday, and Trump, who has mostly shunned masks, reacted during his town hall.

'Well, I mean he has to say that,' Trump told an NBC town hall broadcast on Thursday night. 'I think it's great, he's a friend of mine, he's a good guy, and wrong or not wrong, you have to understand, as president, I can't be locked in a room someplace for the next year and just stay and do nothing.'

His tone is noticeably different to the one taken by Trump since he was released from hospital earlier this month.

He said Covid-19 had hospitalized him for 72 hours but there was nothing to fear.

'Don't be afraid of Covid. Don't let it dominate your life,' Trump said at the time. 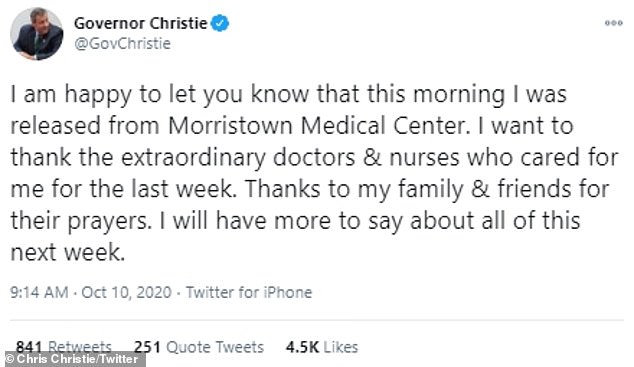 I do not believe a single word that this "Chameleon" is saying.  Don't let this "Green Snake lying in the Green Grass fool anyone.  Those of us that do follow trend of events exactly know the type of "Blabber Mouth" you are.

Comment by vaughn mitchell on October 16, 2020 at 10:39pm
Get a load of fatso. Who listen to the Village idiot and client.