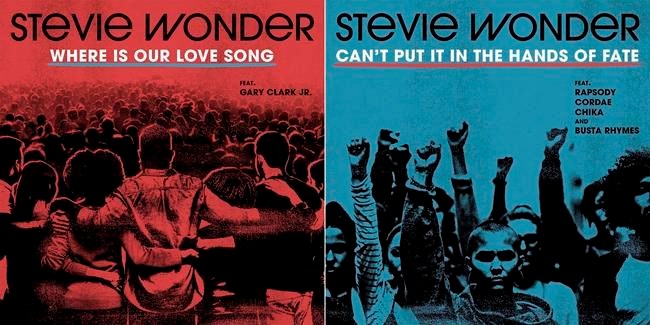 The tracks “Where Is Our Love Song” and “Can’t Put It In the Hands of Fate,” mark the first time the artist has dropped two songs at the same time. The songs will be released through his new label So What the Fuss Music, distributed through Universal Music Group’s Republic Records.

Wonder made the announcement during a virtual press conference Tuesday, MSN reports. He also gave an update on his health after he “was blessed with a new kidney” last December.

“Since I have been released from the hospital, the nurses have made sure I’ve taken my medicine on time and I’m going to do it for as long as I have to, even if it is the rest of my life. I feel great. My voice feels great. I feel like I’m about 40 right now and I just thank everyone for the prayers and the love,” he said.

“And for all of the people that have been listening to these rumors, listen, if I’m feeling some kind of way, I’ll let you know,” Wonder continued. “We don’t want to have misinformation. I am alive and well.”

Wonder started writing “Where Is Our Love Song” as a teenager. “Then came this year, with all the confusion and all the hate and all the east versus west, left versus right. It’s just a hard break,” he said.

He also updated the lyrics to “Can’t Put It In the Hands of Fate” after “thinking about where we (are) in the world and thinking about how this is the most crucial time.”

“I want everyone to be well,” Wonder continued. “I don’t care what color you are because actually I don’t see your color. You see color, don’t act like you don’t see color, you do. But I don’t see your visual color. But I do feel your soul. I do feel your spirit. I see the color of your spirit and soul, and I’m seeing too many spirts and souls that are not about the love that we’re supposed to have and feel for one another.”

Scroll up and listen to both songs via the YouTube players above.

One of the greatest of all time....

Comment by elinor goddard on October 14, 2020 at 7:55pm
Really . U must have been living in a cave!! My brother !!! Stevie is blessed ! We all would had known if Stevie Morris had passed away good to know that he is doing well thank God!!! And will pray for his rehabilitation will go smoothly for him.. see he kept his medical issues on the low just the way it suppose to be so no rumors will start .. that's right!!! God blessed Stevie keep it moving. Life goes on!!

Comment by vaughn mitchell on October 14, 2020 at 3:18pm
Damn, I forgot Stevie Wonder is still alive. Damn, he is out living alot of people.