The DNC claims to represent black Americans, but when it comes time to pick a black candidate, they pick a first-generation Kenyan-American or Indian-American with no connection to black-American history. Did they think no one would notice?

Her selection was not really a surprise, as influential Democrats already had given Biden orders that he was required to pick a woman, and a black, as his running mate.

But instead of attracting more support from the black community, the selection of Harris seems to have done the opposite.

It is Paul Bedard, in his Washington Secrets column, who pointed out that Rasmussen Reports found that now “a third of likely voters who were black said they are ‘less likely’ to vote for the Democratic ticket.”

The same numbers said they are “more likely” as well as those who said it will make no difference.

He pointed out that 37% of blacks have a “very favorable” opinion of her, compared to just 28% of white voters. 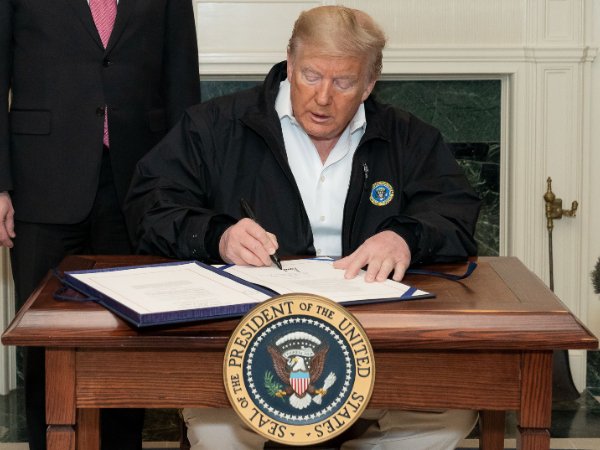 622 people are Tweeting about this

“Biden has recently made a handful of gaffes seen as damaging his effort to shore up the normally Democratic black vote. Party officials said they hoped that Harris would help Biden win the 90% of the black vote Democrats commonly get,” the report said.

“But the Rasmussen poll is a red flag. And it follows other recent polls by the firm that show support for President Trump. For the month of July, Rasmussen said that black approval of Trump was 36%. Before the coronavirus crisis, black employment had hit a high, and his administration has tackled key issues in the African American community, including criminal justice reform and inner-city opportunity zones.

Comment by mr1stroke on August 18, 2020 at 1:33am
El-Bull not once f***** ass Biden brought up black issues when asked about what he will do as president, but now the same racist who stood on the senate floor for ours convince the house why they must renew the crimes bill is the same racist who said yesterday he will fight for mass incarceration, do you see how easy it is to play with the mind, the same niggers who are complaining about the justice system are the same one supporting racist like biden, the niggers from NY and other cities are too comfortable they need to get out and visit places like the work house prison and see what Clinton and Biden did to black people, nothing but modern day slavery at its best, but they rather collect welfare from the democrats and say nothing. I dont have a problem with Trump he has been president for 4 years, i have a problem with those i votes for and watched me suffer for decades, enough is enough i would not be one of the slave niggers and cast my vote for an undercover racist, niggers are comfortable being slaves. They can argue for Biden but cannot tell you what he will do for them

Mnyama you stated: "I don't understand how Black people think someone can get into an office and cater just to them to "earn" their vote when they weren't elected by just Black people..." SOUNDS LIKE YOU'RE TALKING ABOUT OBAMA who did NOTHING for Black people although he had a mandate in his last four years.....YOUR ASS MUST BE JEALOUS Of yOur Mouth Because of all THE Shyt That cOmes out of it. Now poof be gone fool...

D. Hall WOW you have anger issues and are ignorant to the core. You kiss Biden's azz while he's making a fool out of you. THe so called progressive liberal democrats are detrimental to Black people and have no Black agenda except to use you to gain office and being the good masters you worship, they will toss you aside afterwards in favor of your so called brown people. The end result will be they will use set aside programs to uplift the illegals over ignorant Black people like you who fail to realize Biden is just as racist as Trump although in a gentler way. Have you ever heard the song: Killing me softly .....-----Better wake your sorry dumb azz up and stop acting like you're still a slave to the Democrats....

Comment by mr1stroke on August 17, 2020 at 4:55pm
D. Hall you are another dumb n*****, another ignorant n*****, another slave n*****, now you so condition by those white politician masters they even tell you how to speak, who are the Brown people, post one speech or rally before the murder of George Floyd who ever are the brown people have ever mentioned you in their speech or rally, you want the president to shut the country down so your welfare nigher ass can keep getting free benefits, in the mean time the niggers refused to follow the rules of social distance and wearing mask

They piled up on top of each other at every corner stores, on brooklyn i couldnt believed my eyes those corner stores never follow the CDC guidelines nor the niggers i had to pay them to practice the 6 feet rule, the niggers are drinking in the same bottle, smoke the same weed, throwing illegal parties, shooting each other over dice game, you niggers are obsess with death, no one is going to shutdown the country because niggers choose to kill each other, there are those who are business folks or have career who wants to succeed, we practice what they say so we can make it business as usual, you dumb n***** no one cares about you and f*** your brown people, i am only concern about black people not the niggers learn the difference you dumb n*****, why dont you tell me that one thing democrats have ever done for you compare to the other community, if ypur vote counts so much why are you still complaining. Look at your community, in one weekend 50 people shot in the city, how come thats not happening in the white democratic district, stop being a slave, get off your masters dick you f***** n*****

Who is in charge of Caribbean  Fever website? Fox News or Russians. Rasmussen is a very right polling company and are not at all reliable. Black and brown people are dying left and right  because “Drumpf” (His actual last name) refused to shut the country’s down. Drumpf has never had more than 9% approval rating in the black community. And for the extremely ignorant mr 1 stroke and el bull who continue to make ignorant comments  and continually uses the N word. You are both some  of the white trolls or Russian bots that constantly show up on black forums to try and divide us. Real black men don’t talk like you. And any real brothers and sisters out there don’t follow the devil into the bottom less pit. We need to vote and get this devil out of office.

Comment by mr1stroke on August 17, 2020 at 7:48am
Mnyama and how long have you been voting democrat seem like they have been abusing your black ass, they watched the cops brutalize you like dogs they never said anything or pass any laws, look at your community, its dark with crimes and poverty for at least 40 years you have been voting democrat what have they gave you

Its sad only a true n***** would say forgive their masters, but how long will you forgive them for, it takes less than a year to pass the bill for Daca, less than a year to pass same sex marriage, about e weeks for the democratic congress to vote on the crime bill, for as long as you have been voting name one bill they passed for black people compare to any of the 3 I stated. If the democrats are so not racist why do you still worrying about voting rights? So sad how a group of people embrace slavery

Comment by Mnyama on August 17, 2020 at 7:00am
If trump didnt finish off your Black azz in four years, he'll get you the next go around. You will not get any other choices. I dont understand how Black people think someone can get into an office and cater just to them to "earn" their vote when they weren't elected by just Black people or are in a homogenously Black society. Writing in a candidate or not voting at all is a vote for trump. Elect someone who will do good for all people. No one is perfect and they often make policies or say things based on their particular moment in time. You as humans ask for forgiveness and expect it to be given. If either of these candidates did or said something you didn't like, it's human. Forgive and move on. We need trump out of office. Stop being stupid talking about you're not going to vote

Comment by mr1stroke on August 16, 2020 at 1:02am
Id rather die than to support that racist bastard and that house negros. None of the niggers who supports him cannot tell me why he is not racist, they cannot state the facts what makes him better than Trump even though he is calling those niggers retarded, they love their masters, dumb niggers they will argue, they will tell you Trump this and that, but cannot state one fact why Biden is not racist, we already know about Trump why dont you niggers defend your argument with some facts, tell us why biden is so different, which one of you niggers are so intelligent and can provide that information? Otherwise you are what you are , just the slave niggers who love their masters