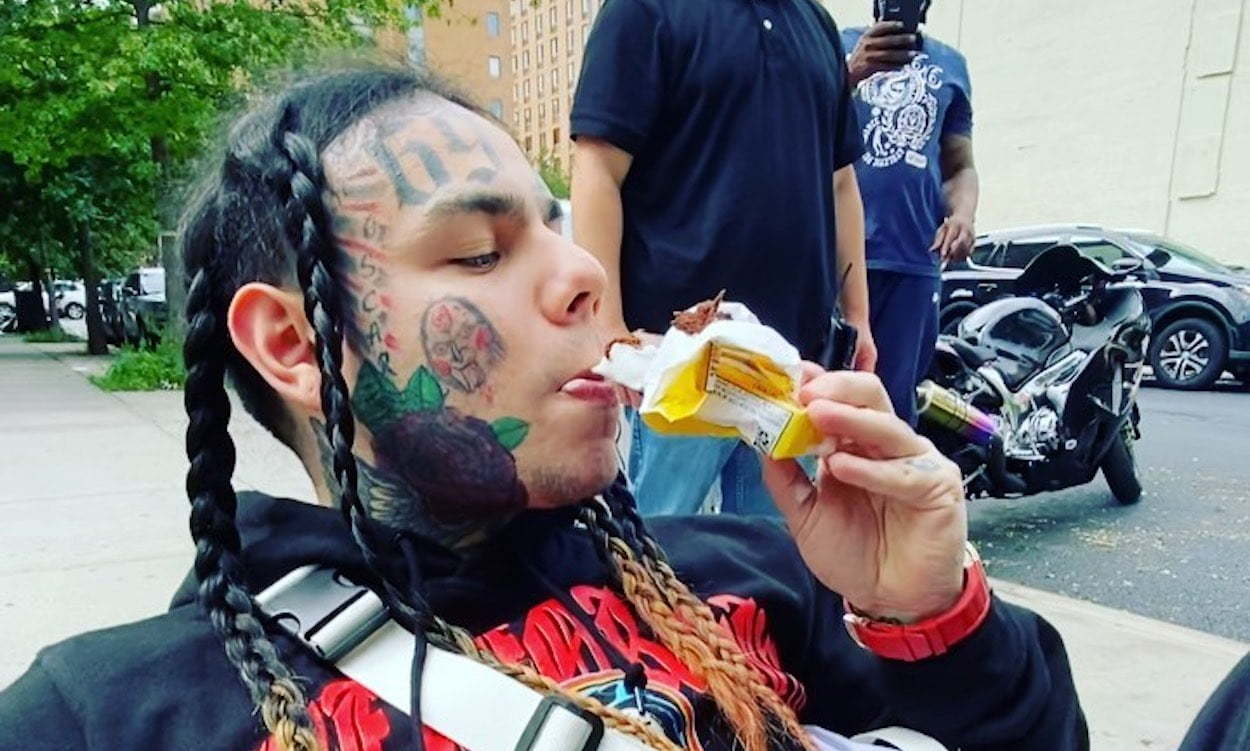 A member of Tekashi 6ix9ine’s security detail allegedly caught got into a scuffle with members of Treywat in New York over the weekend.

The viral video shows one man attacking another man who is allegedly one of Tekashi 6ix9ine’s bodyguards. Two other men can be seen stepping in while a female yelled, “don’t shoot.” It’s unclear if a gun was drawn, but whoever shot the video believed that it was members of the controversial rainbow-haired rapper’s security team who were being attacked. This latest incident comes on the heels of another incident in Harlem where 69 and his bodyguards were allegedly kicked out of a restaurant.

Tekashi 6ix9ine has always been a polarising figure thanks to his instigator personality. Long before heading to jail, the “Punani” rapper was known for trolling on social media and p****** off many people online and in person. His decision to cooperate with prosecutors and testify against his Nine Trey Gangster Blood members to receive a reduced sentence also didn’t win him any friends, with many in the hip hop community disowning him and labeling him a snitch.

Tekashi has become used to being persona non grata in the industry, but he is not receiving similar treatment in real life. The rapper’s house arrest came to an end at the beginning of the month, meaning he is now free to come and go as he pleases. And so, he headed to Harlem with his entourage to dine at Ricardo’s. It seems not all patrons were happy to be in his company, however, as someone shouted “Wrong restaurant, Blood” as they left.

Even if Harlem is off the route, 6ix9ine was warmly welcomed in Brooklyn, where he grew up. The 24-year-old ventured to the streets from his childhood to shoot the music video for “Punani” and also headed to a mall in New Jersey last week where he filmed a satirical video of himself being chased through the streets. The antics suggest that 6ix9ine is still a child at heart, even after the last few months behind bars, which may not be the best thing seeing as his girlfriend, Jade, has revealed that she expects the couple’s child. The baby is set to be Tekashi 6ix9ine’s second as he is already a father to 4-year-old Saraiyah with his ex, Sara Molina. 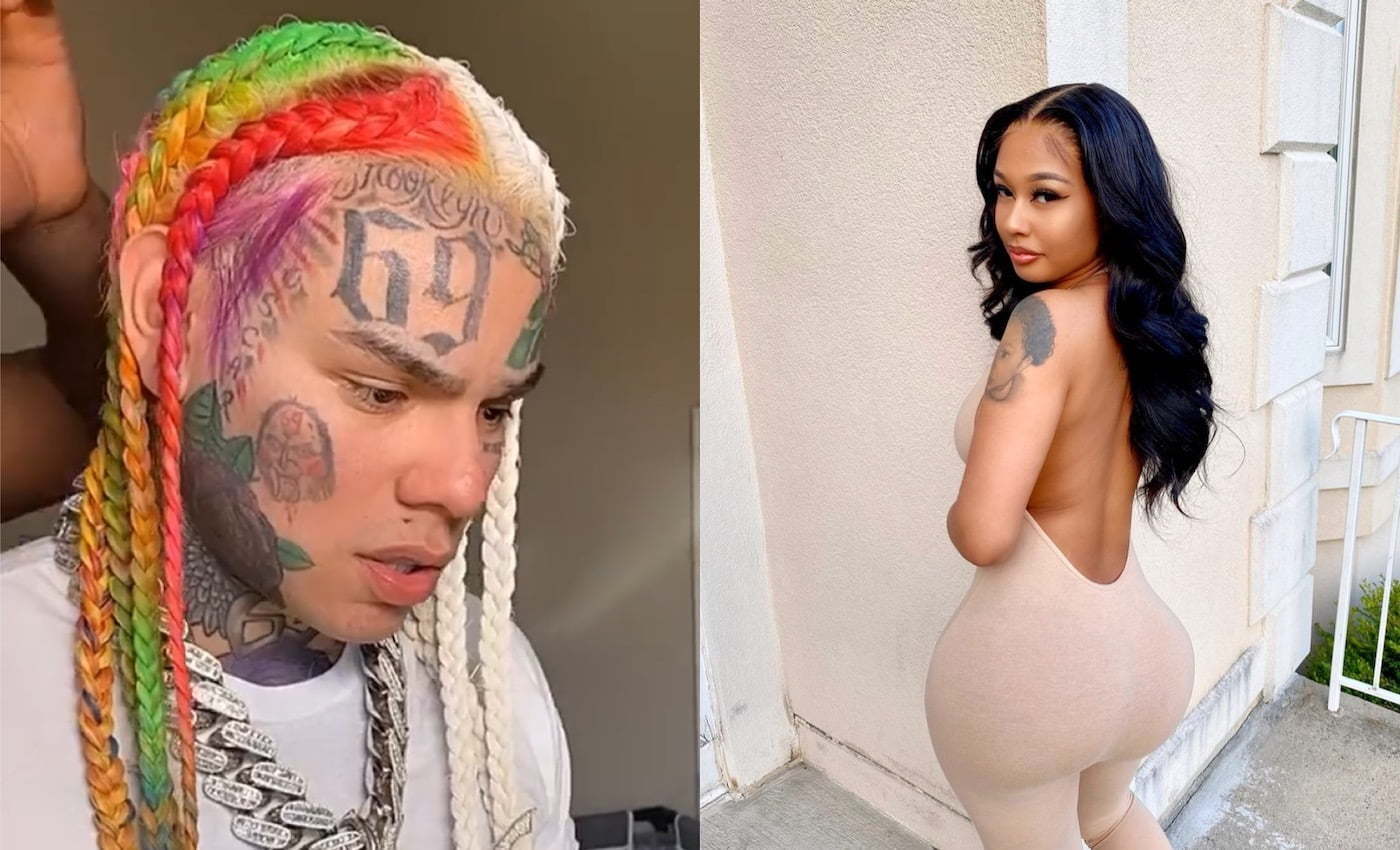 Tekashi 6ix9ine and his pregnant girlfriend were spotted out riding the subway in New York with security.

Newly freed snitch Tekashi 6ix9ine seems to be on a suicide mission after strolling through the streets of New York in broad daylight. The rapper brings the same energy that he has on the gram to the streets, as he taunts his haters, showing them that he can walk anywhere in New York.

In his latest move, he decides to hit the subway and actually boarded a train, presumably showing that he is not scared to head to the city’s most dangerous places. Security guards indeed accompany 6ix9ine, however, there is still a real threat of a hit from a remaining Nine Trey Bloods gang member or someone looking to prove a point. In October of last year, Tekashi provided crucial evidence that led to many of the gang’s top names getting lengthy prison sentences. 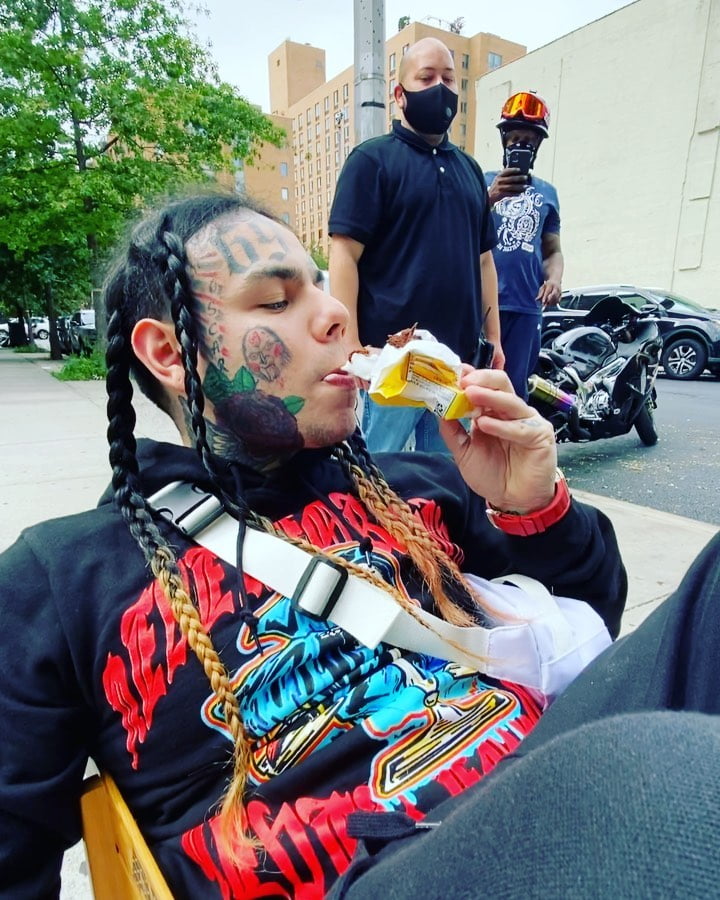 “F**k it took the train today because I felt like it,” he wrote below a video of himself hopping into a train. “I thought they said life was over :/” he boasted in another post. The “Punani” rapper even had a bit of time to laugh and pose for photos.

He has been popping up all over New York in the last couple of days, doing everyday things such as giving kids money, taking pictures, or simply stopping at the park. Before hitting the F-Train on August 7 he stopped to grab lunch at a Harlem restaurant. Sadly for 6ix9ine, Harlem did not provide the same welcoming vibe as other areas of New York and he was forced to leave after patrons hurled insults at him. One person could be heard shouting, “Wrong restaurant Blood.”

The rapper ended his day with a bit of fun as he tried his hand at an indoor skydiving machine, which further proves that he has no fear.

However, there is a real case of coronavirus in New York, and as some onlookers have pointed out, he is not wearing a mask in any of the videos. If we can remember correctly, wasn’t he released early because of health concerns surrounding the coronavirus?

Some fans thinks Tekashi 6ix9ine is on a suicide mission, but he looks pretty comfortable and living good since his release.

Comment by mr1stroke on August 12, 2020 at 11:51am
Allen E. Its all good i dont disrespect to get respect, thats not what i learned on those streets where i came from in North Philly but i do have to stand up if i feel an attack, so we can be good as long we are not trying to disrespect each other, we can be different from the rest whether we like each other or not, its 2020 niggers are fighting and killing each other while white people trying to rule the whole world and we wonder why are still begging, so instead of being like them i stand out and be my self, so its all love my end

All is cool,Brother Stroke...I can dig all of that.No need to be offended,Man...don't take what I said the wrong way,because it wasn't an assault on your character. I was just sharing that I have seen that you're a Brother that isn't afraid to voice your stance,and that's cool...as far as I'm concerned,you're cool with me...and I hear you about your stance on tekashi...Peace,Brother Stroke...peace...

Comment by mr1stroke on August 12, 2020 at 2:19am
Allen E. You are right about everything that you say that i dont know about you because i dont know you, but what you dont know about me being on here i do not address any one unless they address me or we are in discussion, if any one come at me i will straight them out.

You said i like to argue verbally if you are an intelligent person than you would better sense to realize i dont address any one unless they get at me with the disrespect, so i am the same man in person, if any one come at me the wrong way i do not back down, thats who i am, i rather die as a man than to die as a coward

You said i used the word n*****, since you are one of those who dont know the difference you will have to do your home work to learn the difference between a n***** and a black person, so i only call them by their names, if i see a n***** i will call him and he will answer, as for that dude i dont care if he lives or die or what they say about him on the news, i will not support any one who dont have anything to give back to the community and thats just me, so do what you do and be happy, i did not address you until you used my name, so i don't care whether or not you support him, that's your life it is not my concern, but you dont know that about me because you dont know me, i am not better than any one but i am a different type of black man who stands for his belief

@evolution...I'm really concerned about that. Seems like he got involved on a level that he wasn't thoroughly informed of. His hits,(which were NOT good hits,as far as I am concerned),made him more and more successful and then watching the guys use him and the kidnapping and home invasions thing and all of that,and then him trying to act gang-ish,knowing that he ISN'T a thug...well...I'm concerned about him,too. Because while he thinks it is a game and that there's an easy way OUT...the people he was involved with are plotting,it seems...I just hope that he doesn't run into anything...because he doesn't understand.

Comment by mr1stroke on August 11, 2020 at 11:36am
And i dont even listen to that dude music i was never a fan, i no longer support any artists from another culture who have nothing to contribute to the black community, he capitalizing off the culture to the niggers who listen to him ask their selves does he has a charity that supports the community, does he donate to any of the charities that support the community? Niggers are the one who made the choice to live like slaves, they welcome any one to build wealth from the community

Comment by mr1stroke on August 11, 2020 at 11:31am
Allen E. Homie no one can tell me what to do but God, if i agree with the comment i will state it thats all thats it, i dont have to add but i can agree, if i disagree and the comment is not to me i will bypass it, but i credit those who deserves it

he should never have messed with any gang at all...and he only made ONE good cut...the one when he got out of jail. he's a kid...