What da hey-all is going on here?! A Virginia woman, Bashira S. Tripp, was arrested on Thursday after allegedly running her partner over in a parking lot.

Tripp, 34, has been charged with aggravated assault, after witnesses claimed she intentionally hit the victim with her car.

Shocked bystanders recorded the aftermath of the incident, as an enraged Tripp continued to scream at the man’s bleeding and motionless body.

Videos show the man lying unconscious behind the car, as Tripp stomps around the wreckage.

“Every day of your f–king life, every day! Every f–king day!” Tripp yells.

“That’s what happens when you leave your wife,” she screams at him, as blood pools beneath his head. “I gave you 18 years of my f–king years!”

Unbelievably, at one point she even picks up the bumper that broke off her car in the crash and slams him with it.

Horrified onlookers can be heard telling the incensed woman that the victim is dead; another is heard telling a mother to take her young child away, who was watching the spectacle unfold.

The still unidentified man was later transported to Sentara Norfolk General Hospital with life-threatening injuries, and is currently in critical condition.

Norfolk, VA PD confirmed the incident was a domestic-related incident. 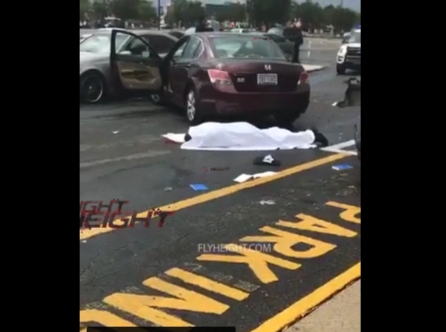 A Virginia woman appears to have murdered her "cheating" boyfriend, by running him over with her car - and the gruesome murder was captured and Livestreamed on Instagram

Norfolk police are investigating a domestic assault that left a man severely injured Thursday afternoon. But this morning, that "assault" case appears to have turned into a homicide case, because social media reports claim that the man died last night.

So far police are being tight-lipped about the investigation. They have not responded to MTO News' request for comment.

But witnesses (who can be seen in the video) described what they saw. In the video, the witnesses can be heard saying that a woman ran the man down with a car. You could hear at least one person in one video saying that he still was breathing while he was on the ground.

The woman in the video can be heard scolding the critically injured man for "cheating" on her.

The police department tweeted that officers took a woman into custody at the scene.

Comment by eollis on October 13, 2020 at 4:14am
Who knows if you can change the font of the posts on Twitter? I have heard this option was recently added to Instagram https://fontsprokeyboard.com/instagram-fonts-generators-change-font.... But I am not sure the same is available on Twitter. If you know more, please let me know. Possibly you need to install additional apps to enable this function?

Excellent comments by all. His little head  can no longer  control the big head.

@Ralph you can say that again.

A Black Woman (Scorned) is a Dangerous lady!!!

I know many will come after me however I believe self control goes both ways. He could have just left her. We don t know the entire story. 18 years with someone and to find out you were taken advantage could be devastating especially if you are on the receiving end. We know of many individuals who took advantage of others and walk away calling the victim crazy , stupid like the comments below

.Leave folks alone if you want to play the field.

RIP cheater and get some help lady whether in jail or out in this devil world..

Comment by vaughn mitchell on August 9, 2020 at 12:24am
Just give her life without parole, no get out of jail card.

The She-Boon would get little time as the animal pleads insanity as her white masters pat her on the back, I guess Darwin kicked in on this poor dead fool for having sex with this insane demon, can imagine what he was like to be attracted to this creature.

she said she gave him 18 years, well how about you send 20 years in jail for STUPIDITY. OKKKK