Lori Loughlin will serve just TWO MONTHS in prison, while husband Mossimo will do five after they take lenient plea deal in college admissions scandal and avoid 40 year term 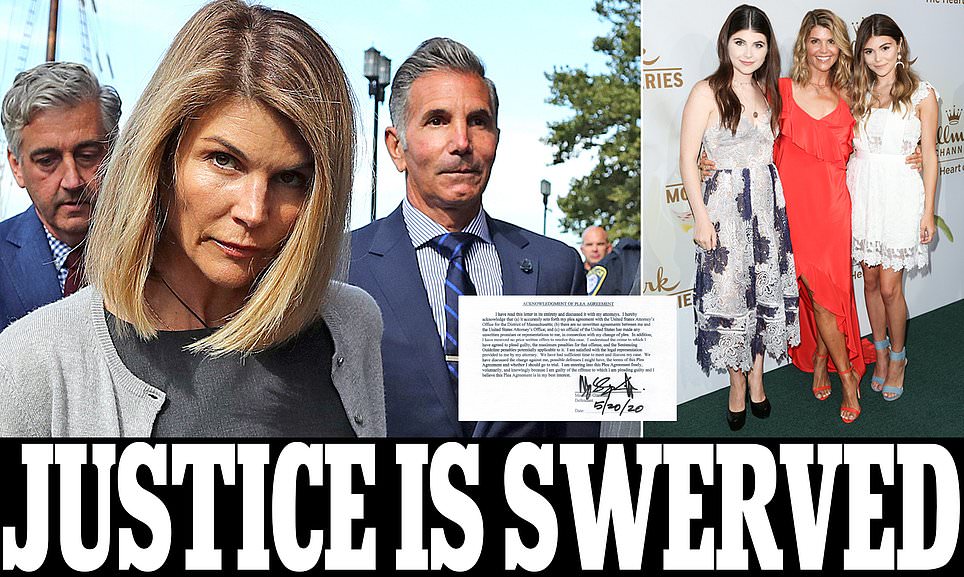 Lori Loughlin and her husband Mossimo Giannulli have taken a generous plea deal which will see them serve just two and five months respectively in prison for taking part in a college bribery scheme to get their daughters into school.

The pair had been facing 40 years behind bars each for paying Rick Singer, the scheme mastermind, $500,000 to pass their daughters off to officials at USC as rowing stars when neither had ever played the sport.

They were arrested in March 2019 along with 50 other parents including actress Felicity Huffman.

Lori and Mossimo pleaded not guilty immediately and insisted they thought they were giving money to charity but on Wednesday, the pair both signed plea agreements where they accepted they will plead guilty to one count of conspiracy to commit fraud. 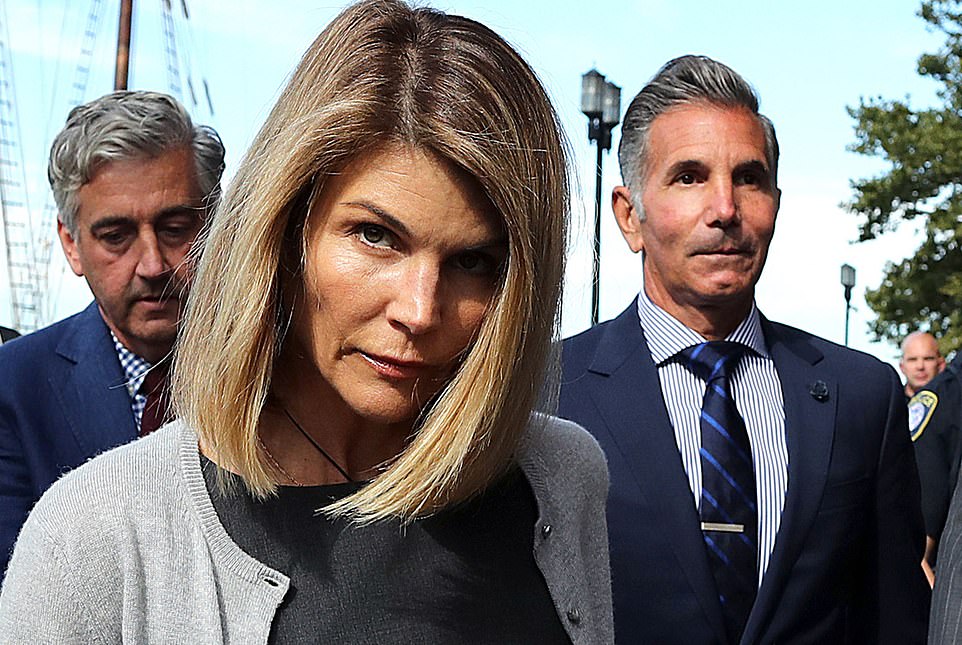 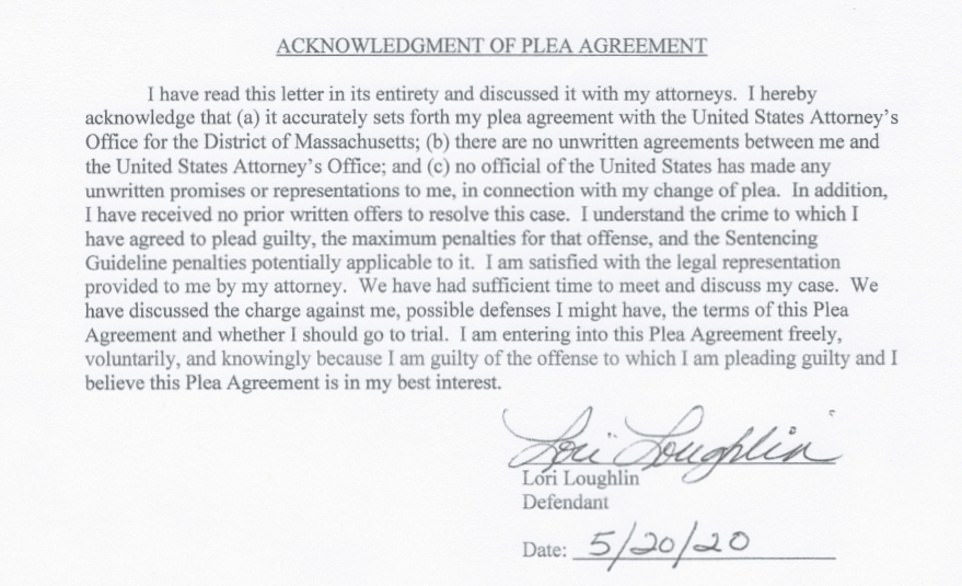 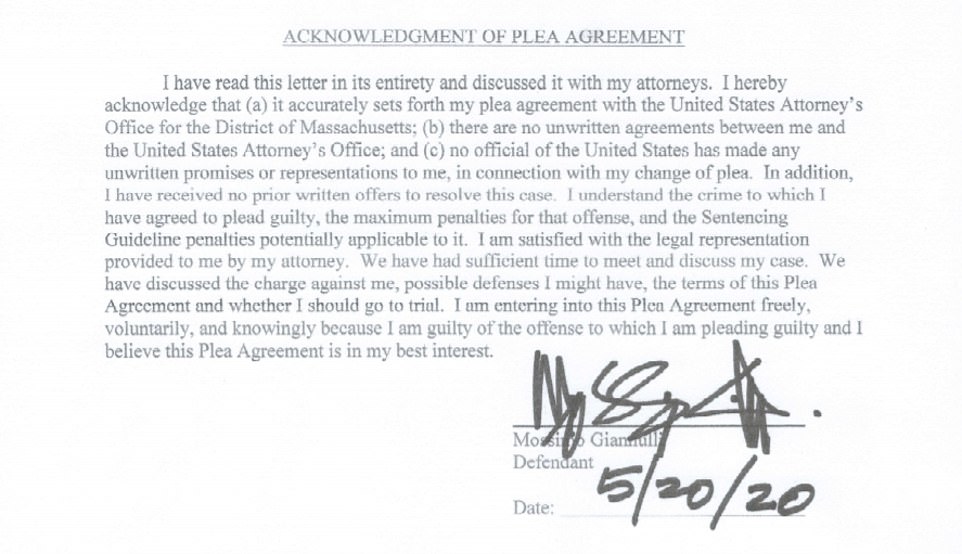 Both will plead guilty to a single count of conspiracy to commit wire and mail fraud which carries a maximum sentence of 20 years behind bars.

A judge still has to approve their sentences and a hearing date has not yet been set.

William Trach, a lawyer for the couple, declined to comment in their change of heart on Thursday morning after the plea deals were announced by the Justice Department.

The pair are the 23rd and 24th parents to plead guilty as part of the case.

The harshest sentence was handed to Douglas Hodge, who was given nine months for his role.

Lori with the couple's daughters Olivia Jade and Isabella Rose (left). She and her husband paid Rick Singer, the scheme's mastermind, to pass them off as crew stars when neither had played the sport

Of the 53 parents and teachers who were wrapped up in the scandal, these are the ones who have been sentenced after accepting plea deals;

Three weeks in prison, one year of supervised release, 250 hours of community service, fine of $9,500

Six months in prison, one year of supervised release, $60,000 forfeiture

I have paid bribes totaling $850,000 - from 2008 until 2012 - to get four of his children into the University of Southern California and Georgetown University as fake athletic recruits, prosecutors said.

Hodge is appealing his nine month sentence, which is the harshest punishment handed out so far in the case.

Others have ranged between just one day behind bars to a probation only sentences to sentences of a few weeks or months.

Felicity Huffman was one of the first. She served just 14 days in prison last year for paying $15,000 for a proctor to change her daughter Sophia's SAT score.

Lori and Mossimo listed their Bel Air mansion for sale earlier this year for $28million.

At the time, sources told TMZ it had nothing to do with their case or any mounting legal fees and that the couple wanted to move on for Mossimo to explore another architecture project.

Singer had an array of exam monitors and sports staff within the colleges on the payroll who facilitated it.

Loughlin and her husband paid half a million dollars to help their daughters, Olivia Jade and Isabella, get into USC by pretending they were sports stars.

More than 50 people were charged after months of investigation which involved Singer cooperating with the authorities and recording some of his phone calls with parents.

Lori and Mossimo denied it immediately and said they thought they were giving to charity.

Other parents, like Huffman who paid to have one of her daughter's test scores augmented to make it more impressive, admitted their roles and tearfully apologized in court.

Two of the parents sentenced in the Varsity Blues case tried to get out of their prison sentences by claiming they would be vulnerable to the coronavirus behind bars.

Gorton denied their requests for home confinement instead of prison time, saying he will 'not forfeit his obligation to impose a sentence that is warranted by a defendant's criminal conduct' despite the 'evolving cause of concern' posed by the COVID-19 outbreak.

Gorton said that if the crisis remains, he could renew their requests.

'If the public health crisis has not abated by the time of the extended report date, the court will entertain further motions,' the judge wrote.

Lawyers for Janavs and Hodge had argued it's too dangerous to send them to prison. The virus has been rampant in prisons and jails across the country, and U.S. Attorney General William Barr has instructed officials to consider moving nonviolent and vulnerable inmates to home confinement to help limit the spread of the virus behind bars.

Janav's attorneys had asked if she could serve five months in home confinement at her mansion on California's wealthy Newport Coast. According to real estate records, Janavs resides in a six-bedroom, nine-bathroom mansion estimated to be worth $11 million.

'If Ms. Janavs were to surrender to (Bureau of Prisons) custody, she is highly likely to become infected with COVID-19. And because of her underlying health condition, she faces a much higher risk than others of serious complications, hospitalization, or death from the virus,' her lawyers wrote as part of her appeal.

Details about her health condition were blacked out in the filing.

Janavs is due to serve her sentence at FPC Bryan - a minimum-security facility located northeast of Austin, Texas.

Janavs' father co-founded Chef America Inc whose' company created the microwavable food Hot Pockets before being sold to Nestle SA for $2.6 billion in 2002

Hodge, who served as CEO of Pimco from 2014 to 2016, had been scheduled to begin serving prison sentences of five and nine months, respectively earlier this month.

They were sentenced in February after pleading guilty to participating in a scheme in which wealthy parents conspired with a college admissions consultant through fraud and bribery to secure the admission of their children to top universities.

The judge said prison time was needed to deter others who might use their wealth to break the law. She apologized for her actions and for hurting her family and friends.

Janavs was sentenced after admitting to paying the consultant at the center of the scheme $100,000 to have a proctor correct her two daughters´ ACT exam answers.

She also agreed to pay $200,000 to have one of her daughters labeled as a fake beach volleyball recruit at the University of Southern California but was arrested before she was formally admitted, prosecutors said

Comment by Robert on May 22, 2020 at 4:49pm
they better have plea deal for a country club prison. A jury trial would have sent them away to jail for a few years