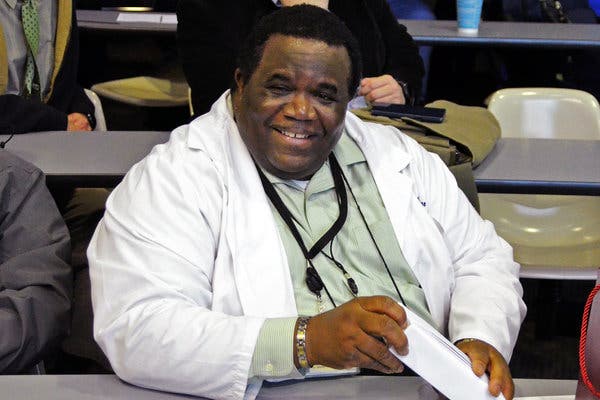 “One of the sad stories of this pandemic is that we’re losing people that we couldn’t afford to lose,”

Reports noted that even though Dr. James A. Mahoney was sick, he continued to see patients via teleconferencing

Dr. James A. Mahoney was a beloved and treasured member of the Brooklyn hospital community. According to a thoughtful report in The New York Times, Mahoney worked at both the University Hospital of Brooklyn and Kings County Hospital Center.

During the coronavirus pandemic, Mahoney was working both days and nights helping fellow New Yorkers.

He started his career at The University Hospital of Brooklyn in 1982, where he quickly rose through the ranks. Mahoney eventually became a pulmonary and critical care physician and a professor at the same college, which is part of the State University of New York system.

His fellow doctors, particularly those who are Black men, were inspired by Mahoney’s commitment and dedication. “As a young Black man, I looked at this guy and said to myself, ‘Twenty years from now I want to be like him,’” said Latif A. Salam.

Salam, who currently works in internal medicine at University Hospital, continued, “When a Black medical student, a Black resident sees him, he sees a hero. Someone that you can be one day. He’s our Jay-Z.”

Despite his advanced age, Mahoney continued to treat patients during the coronavirus pandemic.

Dr. Mahoney contracted coronavirus in early April. According to the report, he continued to see patients via teleconferencing while isolating at home. Ultimately, his condition deteriorated and he was admitted to the same hospital where he started his career, University Hospital.

He was able to be visited by colleagues, and unlike most coronavirus patients, on April 27 Mahoney did not die alone.

According to Google, which keeps a running daily tab on coronavirus statistics, Kings County has had more than 47,000 cases of coronavirus and over 4,200 deaths. An April report shows that Kings County, where Brooklyn sits, is the deadliest county in New York State for COVID-19 related deaths. In the dangerous battle with Virus, thank the wonderful doctors!

This is so saddening.  Just breaks my heart. God bless him

Comment by marc anderson on May 20, 2020 at 12:30am
RIP Dr James A.Mahoney and thank you not only for your service I also thank you for the contribution to the human race and my deepest condolences goes out to your family.

SIP Sir, Thank you for your service, guidance and mentorship.

But, I thinkt he deadiliest county is Queens

R.I.P. thank you for your service!