The Pentagon has officially released three video clips showing the midair military interactions with “unidentified aerial phenomena” (aka UFOs) above US military bases.

The footage, captured by U.S. Navy pilots years ago, had previously been released in 2007 by a private company owned by former Blink 182 frontman and current UFOlogist Tom DeLonge. In the clips you can hear the pilots’ are shocked at how quickly the objects are moving.

The footage shows mysterious, wingless aircraft traveling at hypersonic speeds, with no visible means of propulsion. UFO research group To the Stars Academy of Arts and Science published the clips in 2017 and 2018; at the time, those videos were allegedly declassified, Live Science previously reported. However, in September 2019, Joseph Gradisher, a spokesperson for the Deputy Chief of Naval Operations for Information Warfare said that the footage had not been cleared for official release.

On Monday, the Department of Defense said it had authorized the official release of the three unclassified Navy videos, noting that  the “aerial phenomena” remains “unidentified.”

The Pentagon releases video of UFOs. 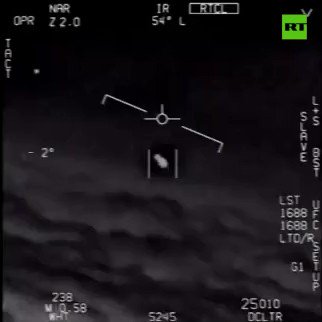 787 people are talking about this

In a statement, a Department of Defense rep confirmed the legitimacy of the footage. Spokesperson Sue Gough said officials decided to release the videos after determining that it “does not reveal any sensitive capabilities or systems, and does not impinge on any subsequent investigations of military air space incursions by unidentified aerial phenomena.”

Below is the full statement:

After a thorough review, the department has determined that the authorized release of these unclassified videos does not reveal any sensitive capabilities or systems, and does not impinge on any subsequent investigations of military air space incursions by unidentified aerial phenomena. DOD is releasing the videos in order to clear up any misconceptions by the public on whether or not the footage that has been circulating was real, or whether or not there is more to the videos.

The Department of Defense formally released the footage to curb misconceptions, Complex reports.  The videos include one from November 2004 and two from January 2015. The footage can be viewed and downloaded here.

540 people are talking about this

In a 2019 interview with Rolling Stone, he also discussed the Navy’s response to his “young startup” initially posting the UFO footage.

“For me, the ramifications are so vast,” he said. “It’s who we think we are, and where we’re going. Are we the only life in the universe? What are these technologies? The technologies can defy the laws of gravity and physics as we know them.”

our ass is grass

Caribbean Fever   AZZHOLE: YOU'D RATHER STEAL MY POSTS THAN GIVE ME CREDIT FOR THE ORIGINAL AND POST IT UNDER MY NAME.....YOU'RE A REAL DICK.....AND THE PROOF IS THAT THIS CAME FROM POPULAR MECHANICS AND HERE IS THE LINK TO THE ARTICLE                   https://www.popularmechanics.com/military/research/a32289669/navy-o...

Vaughn Mitchell I'm with on this one!

Comment by vaughn mitchell on April 28, 2020 at 4:56pm
Wow, like it's a big deal. At one time man thought the Earth was flat, and we would fall off. Your an idiot if you believe we are the only planet in the universe that have life. Aliens, are not trying to catch the caronavirus, they are keeping their distance.