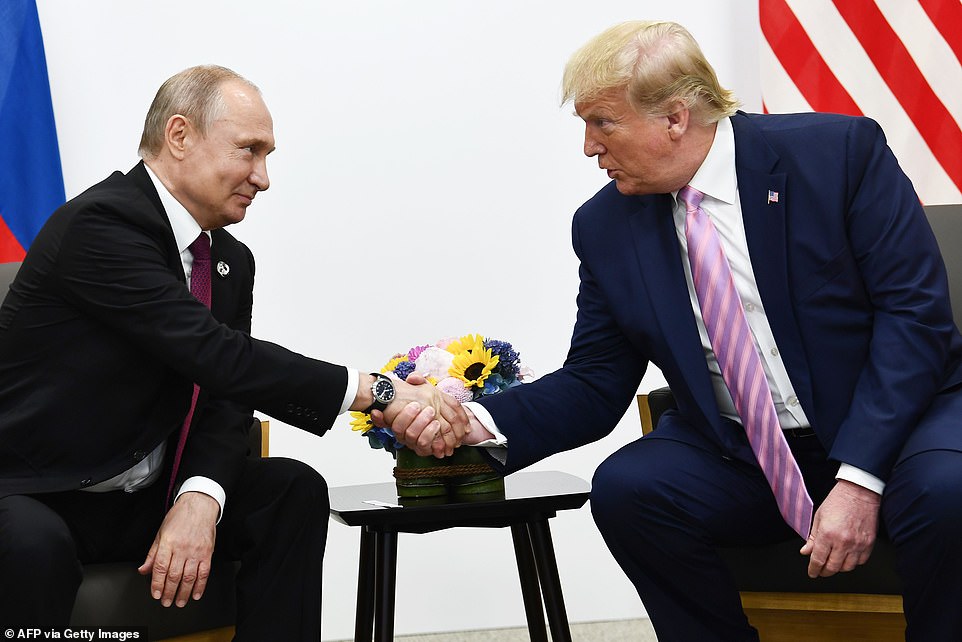 Russia sent 60 tons of medical supplies to the United States to help combat the coronavirus after Russian President Vladimir Putin offered them to President Donald Trump when the two spoke on Monday, a senior administration official told DailyMail.com

The supplies landed at John F. Kennedy airport in New York on Wednesday and were criticized on both sides of the Atlantic. American officials questioned Putin's motives in making the offer and Russian health officials described their own needs for such equipment.

Putin made the offer of help to Trump, who accepted it.

The cargo plane carried 60 tons of ventilators, masks, respirators and protective equipment at a time when the United States is struggling to meet the demands of health care workers who are on the frontline.

'Russia sent us a very, very large planeload of things, medical equipment, which was very nice,' President Trump told reporters at the White House Monday during his daily press briefing. 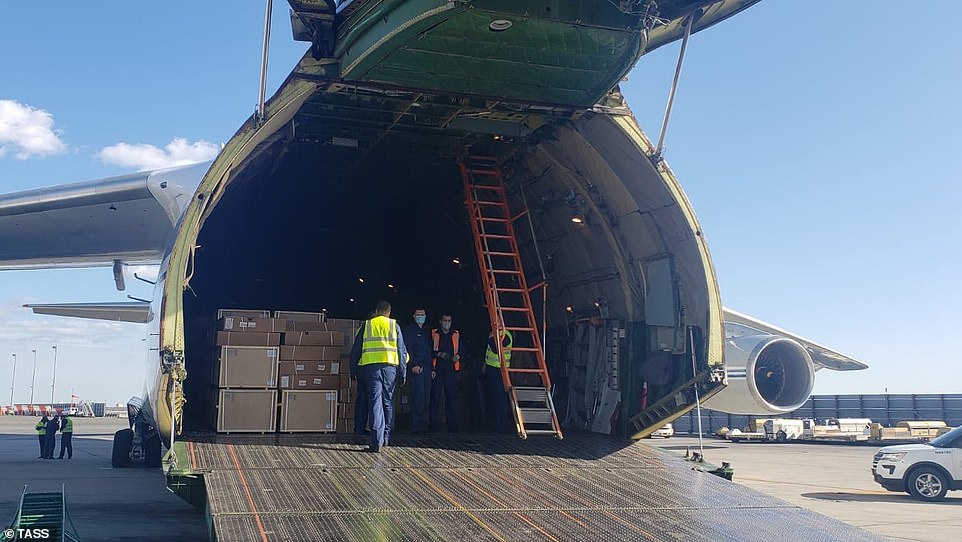 Russia sent 60 tons of medical supplies to the U.S. following a phone conversation between Presidents Vladimir Putin and Donald Trump 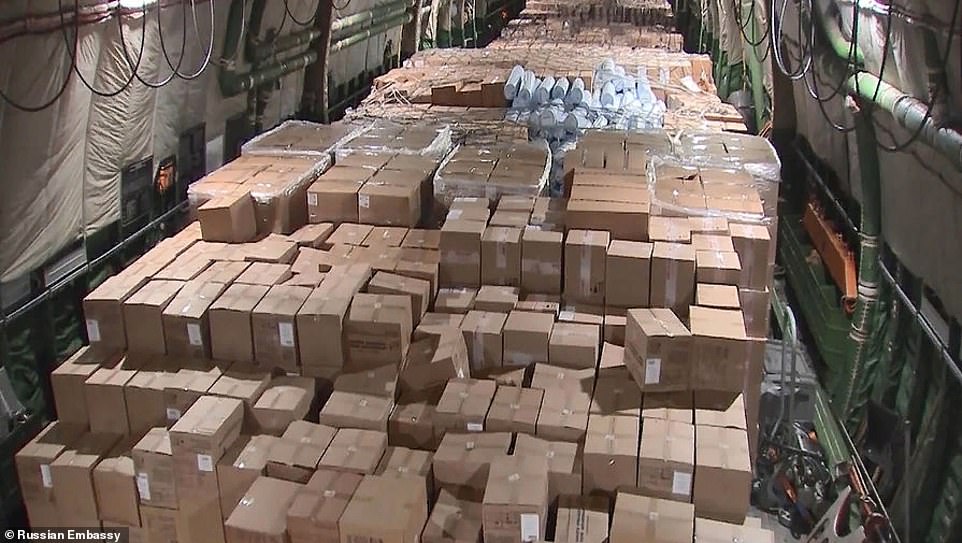 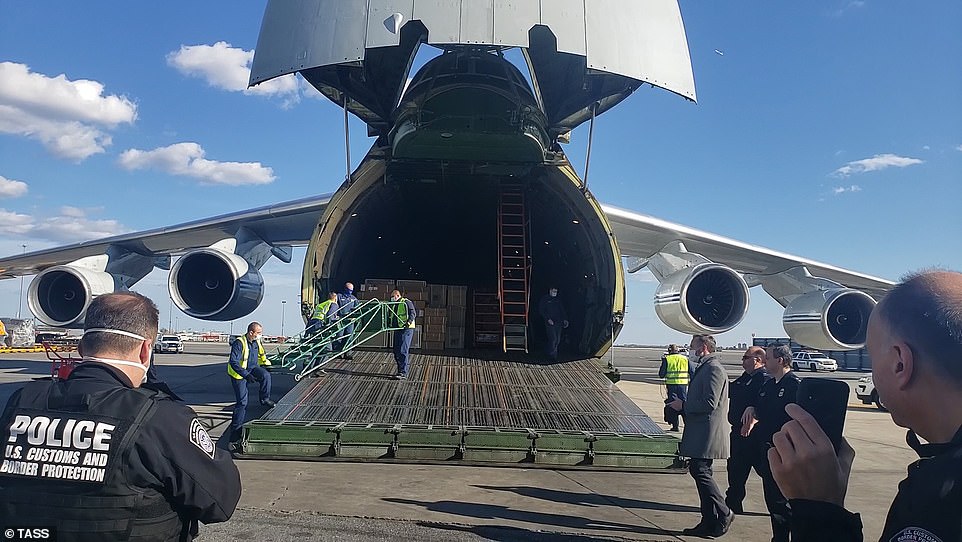 A cargo plane carrying boxes full of protective gear and ventilators touched down at John F. Kennedy Airport in New York Wednesday, two days after the world leaders discussed the deal on the phone

Secretary of State Mike Pompeo confirmed that the U.S. paid for the supplies, but did not disclose the amount.

But the assistance from Russia was also met with criticism from some American diplomats, who asked whether President Trump is ignoring Putin's motivation in sending the supplies.

Russia is under U.S. sanctions for its interference in the 2016 presidential election and its annexation of Crimea from Ukraine in 2014.

'Nothing to see here. Just a Russian military aircraft landing at JFK with 60 tons of medical supplies to support America's #COVID19 response. A propaganda bonanza as our own government shrinks from America's leadership role in a global crisis,' Brett McGurk, a former diplomat for Trump and former Presidents Barack Obama and George W. Bush, wrote on Twitter.

Ben Hodges, a former commanding general of the U.S. Army in Europe, said on Twitter 'it's a gift TO the Kremlin, not FROM it.'

And Andrew Weiss, a Russia analyst at the Carnegie Endowment for International Peace, simply tweeted of the supplies: 'This is nuts.'

State Department Spokeswoman Morgan Ortagus said Wednesday the equipment would be carefully examined to make sure it met the quality requirements of the U.S. Food and Drug Administration.

She thanked Moscow for sending the supplies - and for putting aside frosty geopolitical relations to help for the greater good.

'We are a generous and reliable contributor to crisis response and humanitarian action across the world, but we cannot do it alone,' Ortagus stated.

'Both countries have provided humanitarian assistance to each other in times of crisis in the past and will no doubt do so again in the future. This is a time to work together to overcome a common enemy that threatens the lives of all of us.' 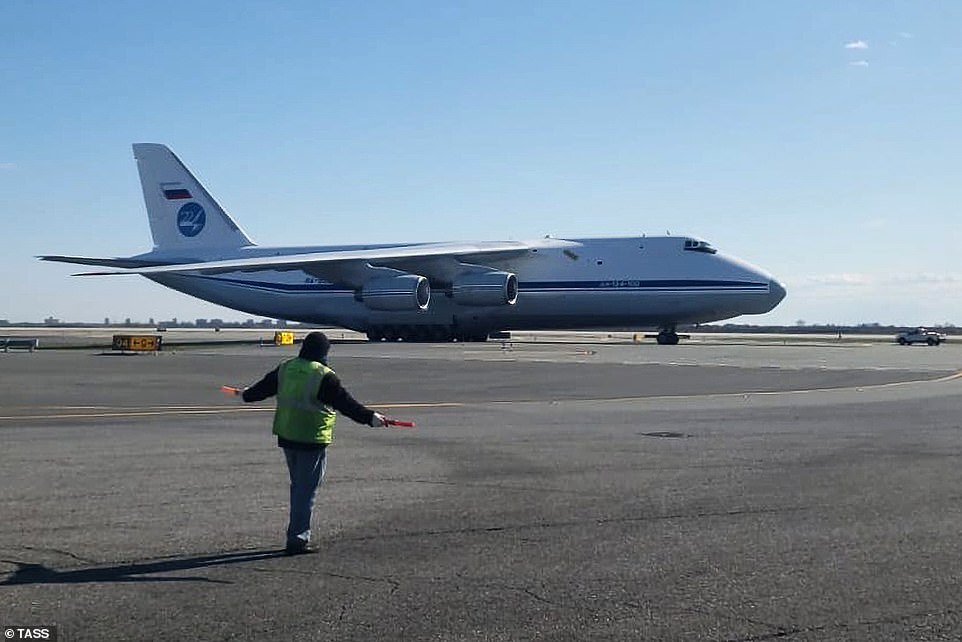 Critics have blasted the move, claiming President Trump has ignored Russian's potentially nefarious motivations for sending the supplies. Putin and Trump are pictured in 2019 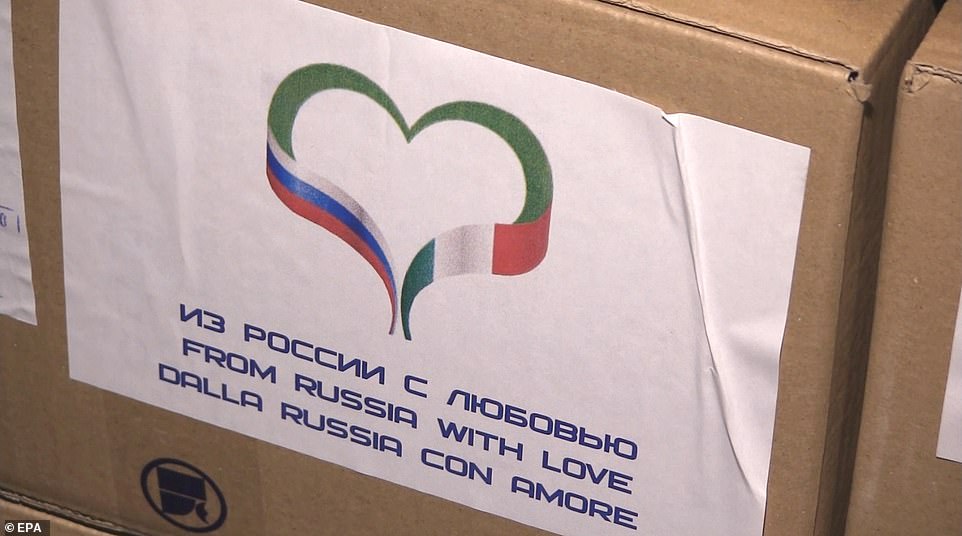 Nope! I dont trust this move AT ALL!