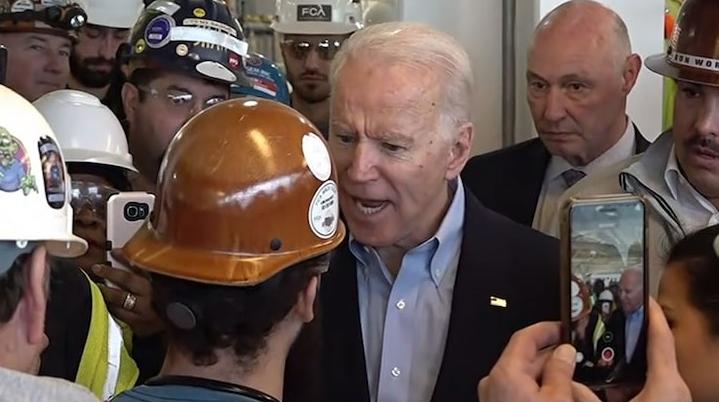 Biden told the autoworker he supports the 2nd Amendment and owns many guns himself, but points out that gun rights don’t equate to owning any weapon you want … like assault rifles.

The guy in the hard hat came back saying there’s a “viral video” proving him right, but Biden swatted that away, saying it’s a lie and it is.  The guy most likely is confusing Biden with Beto O’Rourke who had previously said on the Democratic debate stage, ‘hell yes, we’re going to take your AR-15,’ the clip was widely misinterpreted as Biden making the same promise.

By the way, the exchange didn’t end on a friendly note either — the hard hat dude told Biden he works for him, but Biden shot that down. Then there was this …

“Don’t be such a horse’s ass,” Biden told the man before walking away.

We’ll take a wild guess and conclude that’s at least one vote Uncle Joe’s not getting today from that stop.

No, Joe ain’t “sleepy” no more. If he ever was. In fact, Joe Biden‘s wide awake and is in fighting form these days. Fighting for votes, that is. Even if it’s verbal.

Speaking of which, earlier today, the former VP who’s looking to replace Donald Trump in the White House, went toe-to-toe in a heated exchange with a Detroit autoworker who accused him of trying to violate the 2nd Amendment.

As you know, today is the primary day in 6 states including Michigan where the current Democratic frontrunner met with employees at an auto plant. Apparently one of Uncle Joe’s meet and greets didn’t go as planned. As you can see in the video above, as he’s surrounded by workers in hardhats, Biden ended up telling one of ’em … he’s “full of s**t!”

Wait. What?! Yeah, that was Joe’s response to dude who claimed Barack’s former right-hand man is against the right to bear arms, but Biden didn’t let the words coming out of the guy’s mouth go unchecked. Joe looked like he was ready to tangle, verbally, ’cause he also quickly shushed an aide who tried to pull him away from the confrontation.

So what if he did cuss him out. We have one of the most rude, disrespectful, crass, bullies in office. People have the nerve to say anything about Biden cussing someone out. Looks to me like he contained himself and didn't punch him.