'I forgive you': What dying wife said to her Army medic husband's mistress who was stabbing her to death, as killer is sentenced to 33 years in jail and he is given 35 years for hatching plot 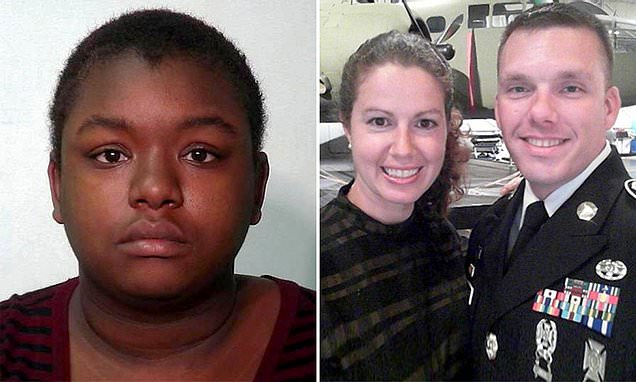 A former Army medic has been sentenced to 35 years in prison for arranging to have his mistress stab his wife to death in 2014.

Michael Walker, 40, was sentenced on Monday in Honolulu, Hawaii, after pleading guilty to second-degree murder in September, about a week before his trial was scheduled to begin.

He admitted to hatching the plot to have Alisa Jackson, the woman he was having an affair with, kill his wife Catherine Walker while he was working in the emergency room at Tripler Army Medical Center in Honolulu.

Jackson, who carried out the fatal stabbing at the Walkers' home on the Aliamanu Military Reservation, was also sentenced on Monday.

She received a 30-year sentence after pleading guilty to murder in 2015 under a deal with prosecutors which saw her avoid a life sentence in exchange for helping secure an indictment against Michael Walker.

Jackson, 29, described in court how she stabbed Catherine Walker multiple times with a kitchen knife and then waited half an hour to ensure she was dead.

She also provided prosecutors with information about her coded messages with Michael Walker, in which they discussed having Jackson commit the killing while he was at work so that he would have an alibi. 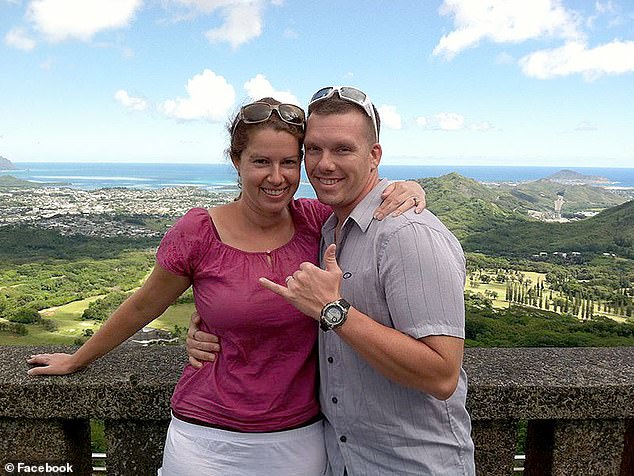 Former Army medic Michael Walker, 40, was sentenced to 35 years in prison on Monday for arranging to have his mistress stab his wife Catherine (above together) to death in 2014

'Our goal from the very beginning was to hold everyone responsible for Catherine´s death accountable,' Assistant US Attorney Tom Brady said Monday.

Catherine Walker's father, Douglas Plotz, said his family supports a lower sentence. 'We wholeheartedly forgive her,' he said. 'I want Ms Jackson to know that.'

Catherine Walker also forgave Jackson, Brady said. 'On the night she was stabbed to death, Jackson asked her if she forgave her,' Brady said. 'As she was being stabbed, Catherine, replied, yes.' 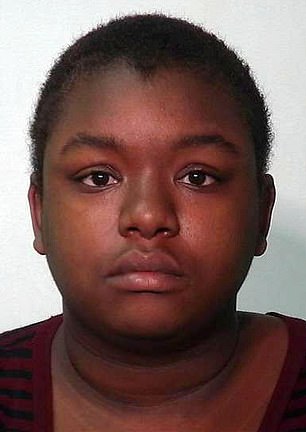 Alisa Jackson (pictured), who carried out the fatal stabbing, was sentenced to 30 years in prison on Monday

Under a deal with prosecutors, Michael Walker faced 24 to 30 years in prison. But US District Judge Susan Oki Mollway said she sentenced Walker to a longer term because he orchestrated the killing.

Mollway, who agreed to sentence Jackson to a range of 30 to 33 years, said she wanted to make sure Walker's sentence was longer than Jackson's.

'Ms Jackson wielded the knife that killed your wife,' Mollway said. 'And that was a terrible, terrible deed. But it does appear to me that you were in control. That she did what she did because you wanted her to. And you knew she had mental health problems.'

After meeting through an online dating site in September 2014, Michael Walker told Jackson he was married and that his 'deepest desire' was to have his wife gone, but he couldn't divorce her, prosecutors have said.

Michael Walker told Jackson he couldn't simply divorce his wife because of financial concerns and stood to receive $400,000 in life insurance, Brady said. 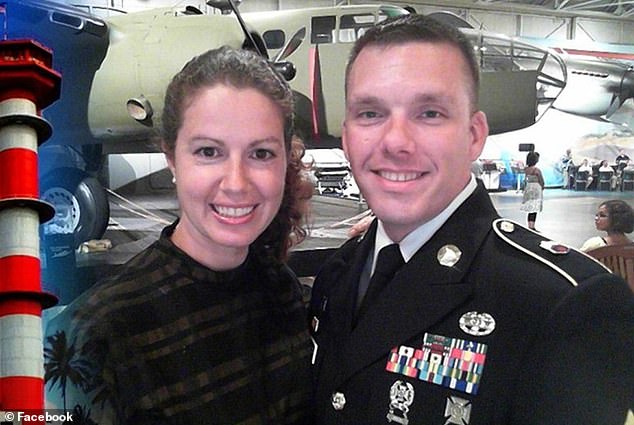 They plotted the killing in emails, in person and in text messages where they called each other 'daddycakes' and 'babygirl', according to Walker's plea agreement.

On November 14, 2014, they met in a military reservation's gym parking lot, where Jackson said she would kill Catherine Walker that night, Brady said.

He described how the two came up with a text messaging code to let Jackson know whether she should enter the home through a window or use a key near the back door. If Michael Walker texted, 'good', that would mean use the window and 'bad' would mean the key.

Walker texted 'bad', Brady said, and at about midnight Jackson walked to the Walkers' house at Aliamanu Military Reservation and found the key, Brady said.

Jackson said in court previously she 'went inside and grabbed a knife and went upstairs and stabbed her'. 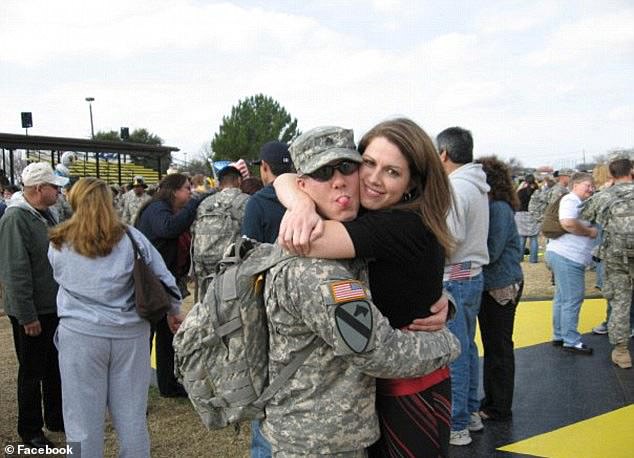 During that 2015 testimony, Jackson revealed that she was taking medication for depression and psychosis.

Brevar said his client had been having an affair with Jackson but that he loved his wife very much and did not want her dead.

The couple had been married for more than 11 years at the time of the killing and were about to undergo in-vitro fertilization after a decade of trying to conceive a child, Brevar said.

After Monday's sentencing, Michael Walker apologized to his wife's family.

'I love Cathy very much and I would do anything if it could bring her back,' he said.

In 2016, a military court found Walker guilty of child pornography charges that surfaced during the murder investigation.

In 2017, Walker was convicted of sexually abusing a child, physically assaulting a child, and wrongfully communicating a threat.

He was reduced in rank from sergeant to private, sentenced to 10 years confinement, and received a dishonorable discharge, the Army said.

Comment by E Peters on February 13, 2020 at 2:41pm
When you choose a dummy you get dummy results. Welcome to Prison. Then he has the nerve to say to the woman’s family that he still loves her. How twisted.

Comment by Mnyama on February 13, 2020 at 10:00am
As soon as I saw her picture then his, I knew he was looking for someone dumb or unstable enough to carry out the murder. There's no way on earth he could have been interested in her.

Comment by mr1stroke on February 12, 2020 at 1:25am
A lot of those black females are being pimp by those white boys, they tell those females they are their boy friends some even marry them, they make them sleep with other men for money. Trust me when i tell you when you do certain business you get offers, i have people who wants to rent the property to do sex videos, its big business, the white women do it too, on many dating sites some say they are looking for black men to have sex with but their husbands have too watch, those are the one who makes sex videos sale it to porn sites, its big business, some times they rent for the weekend. When those girls are online looking for sugar daddies 9 times out of 10 they will find a pimp most of those young girls are already hookers its a choice for money

I was walking on the beach the other day and a white guy and black girl were walking towards me. He was tall and she was short. She reached up to about his breast level. She wasn't very pretty and look like she could have been homeless. He had his arm draped around her shoulder in a lovely fashion. She had both arms wrapped around his waist and then she kissed his chest. I started laughing cause I was thinking that he probably treated her better than anyone in her life. But then again.....how long will that last?

Comment by mr1stroke on February 12, 2020 at 12:43am
Lol while youre saying that there are many black females are proud dealing with those crackers, niggers seriously envy those white folks they will do anything to make white people happy, and many of them just dont talk about because they are ashamed

When are our people going to stop laying with these cave dwellers. He thought he could walk off Scott free cause she killed her. You know he didn't have an ounce of feelings for that girl. These devils don't have no love for us.

Comment by mr1stroke on February 11, 2020 at 10:17pm
It dont matter how many charges he faces, that will not bring her back or reduced the pain she went through before dying, he is still have life

Comment by mr1stroke on February 11, 2020 at 10:14pm
Wow, well there goes love for those who believe, while i enjoy having sex and slay beautiful women, please convince me of that love nonsense. If it works for you, enjoy it but dont convince others, everything is not for every body, thats why they are in pain