A caucasian crook is going viral after he robbed a bank wearing black face - in an effort to play on racial stereotypes while concealing his identity.

The robber walked into a PNC Bank on Pulaski Highway in Maryland on Tuesday afternoon.

"He came in, handed her a note, handed the teller the note, she gave him the money she had in the drawer," said Perryville Police Chief Allen W. Miller.

The teller did not see through the disguise - we can't see how not, but he gave the description the robber wanted him to give over to the cops.

"We interviewed the teller, and the teller gave us a description of a black male, five-seven, five-eight, 180 pounds," Miller said per WMAR.

Man in blackface robs Maryland bank, police say.
Police described the suspect as a "white male, with paint on his face.": @NBCNews https://www.nbcnews.com/news/us-news/man-blackface-robs-maryland-bank-police-say-n1126346 … 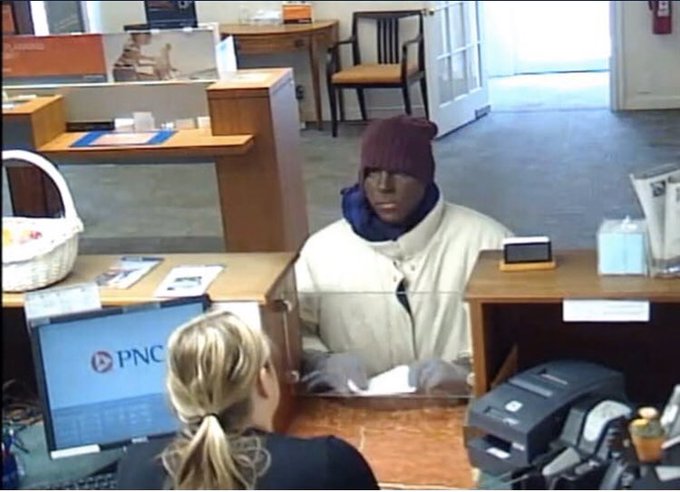 4,136 people are talking about this

"They found out by looking at the glove area, between the glove area and the jacket, this was actually a white male we're looking for," explained Miller. "So initially, the call out was for a black male. It turned out to be a white male in a black face."

After the robbery, the crook escaped in a Ford Focus. He has not yet been caught, but the pictures of him are going viral, and we don't expect that it will be long before the cops find him.

"We're getting calls from all over," said Miller. "To cover his face, you know, the black face and to not cover his hands---not a very smart character, but it's not a matter of 'if' we're going to catch him. It's a matter of 'when.' He's by no means the smartest bank robber out there."

What do you thinks these white supremacist do when they do drive by shootings and murder Black people?