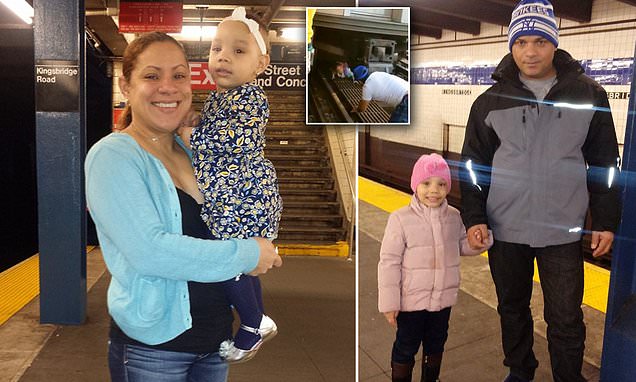 A suicidal father who threw himself and his five-year-old daughter in front of a train reportedly called his wife to say goodbye moments before he jumped.

Fernando Balbuena was killed when he leaped in front of an oncoming train in the Bronx on Monday morning. His daughter Ferni miraculously survived.

The father made a troubling phone call to his wife, Niurka Caraballo, minutes before he jumped, a family friend told the New York Post.

Luis Sanchez said that Carabello immediately suspected something was wrong when she spoke to Balbuena shortly after he left the family's apartment with Ferni at around 8am.

'She couldn't understand what he was saying. It wasn't coming through,' Sanchez said. 'But she got the feeling that something was very, very wrong.'

A police source told the New York Daily News that Balbuena told his wife: 'Goodbye. Take care of the kids.'

Alarmed by the phone call, Caraballo ran to the subway station at Kingsbridge Road.

When she got there, the mother learned that Balbuena had jumped into the path of a 4 train with Ferni in his arms.

The girl escaped the ordeal physically unscathed as harrowing video showed Good Samaritans pulling her out from underneath the train. 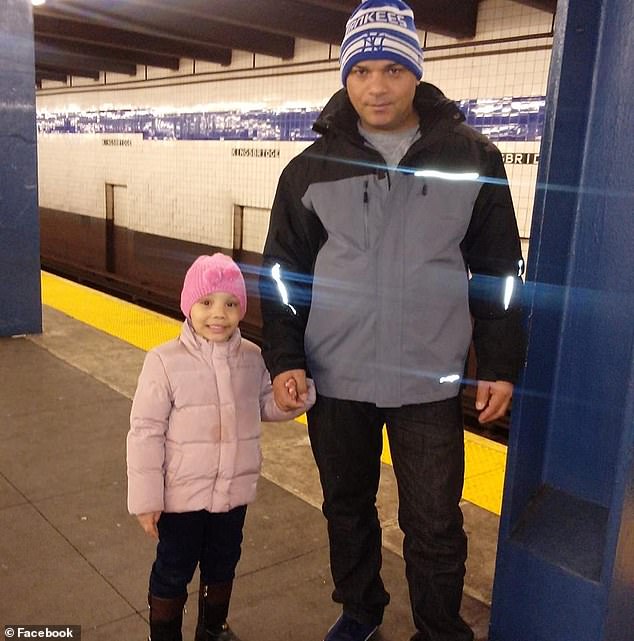 Fernando Balbuena died of an apparent suicide by jumping in front of a train with his five-year-old daughter Ferni in his arms on Monday morning in the Bronx. The 45-year-old father reportedly called his wife to say goodbye moments before he jumped. Balbuena is pictured with Ferni, who miraculously survived the horrifying ordeal 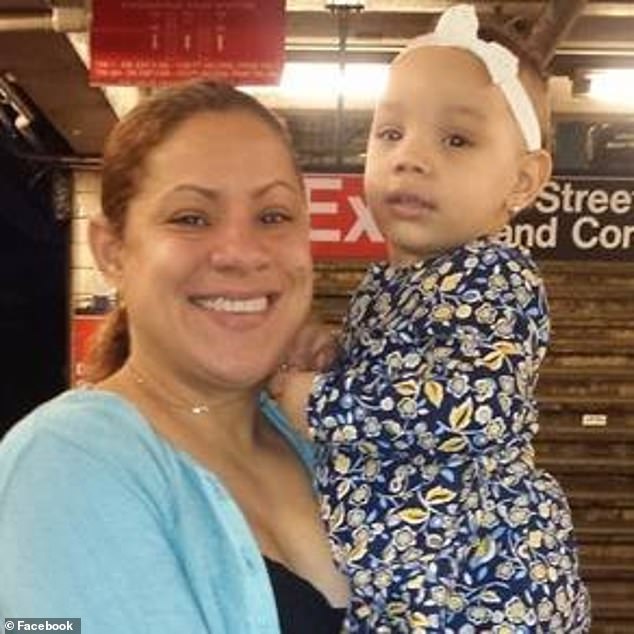 A family friend said Balbuena had called his wife, Niurka Caraballo, minutes before he jumped. The mother immediately suspected something was wrong and ran to the subway station at Kingsbridge Road. Caraballo is pictured with her daughter 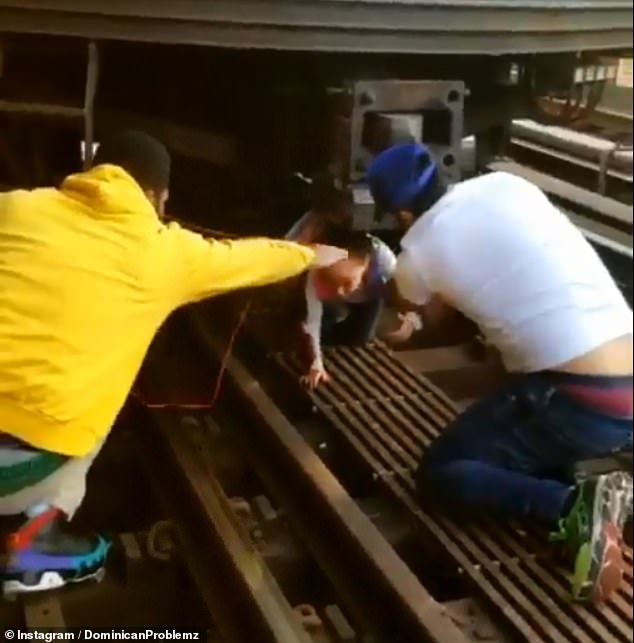 Child rescued from below train after good samaritans jump on track

Several rush hour commuters watched in horror as Balbuena made the fatal leap off the raised platform.

Among them was Jairo Torres, one of the two Good Samaritans who helped rescue Ferni from under the train.

'I was paralyzed at first, just like everyone,' Torres, a 36-year-old Bronx construction worker, told the Daily News. 'But then I just jumped... I didn't do it to be a hero... it was immediate.'

Torres and another witness, 29-year-old Cesar Dominguez, braced for the worst as they crouched down to look under the train.

The two bodies under the train were motionless at first, but then Ferni, wearing a bright pink backpack, shifted.

'It was the first thing I thought of, because there's always a space between the train and the track. I knew in my heart she was alive.'

Unable to crawl under the train because of the electrified tracks, Torres and Dominguez called out to the terrified child as she tearfully cried: 'Papi, papi.'

Ferni made her way out and Torres picked her up, passing her to a man on the platform, Antonyo Love.

Torres stayed on the scene until Carabello arrived.

'She hugged me and thanked me and cried of course, and that was everything,' he said.

Love said he tried to reach Balbuena but he was too far under the train and wasn't responding. 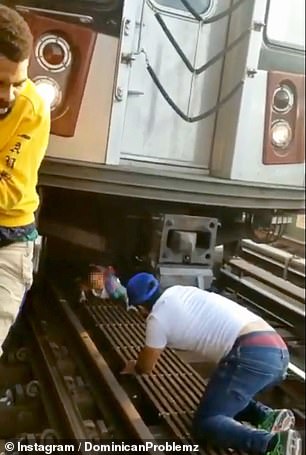 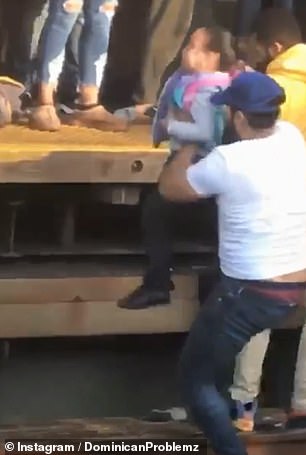 Rush hour commuters watched in horror as Balbuena made the fatal leap off the platform. Jairo Torres, 36, and Cesar Dominguez, 29, jumped onto the tracks to see if Balbuena or Ferni had survived. They coaxed the young girl out from under the train and lifted her to safety 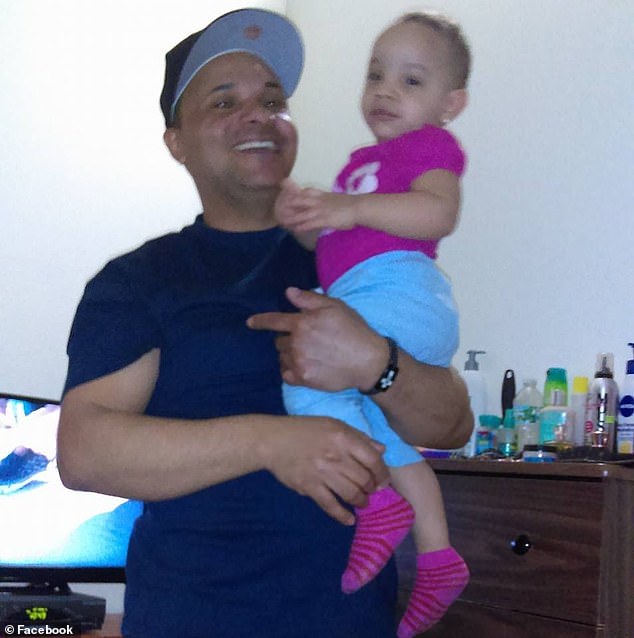 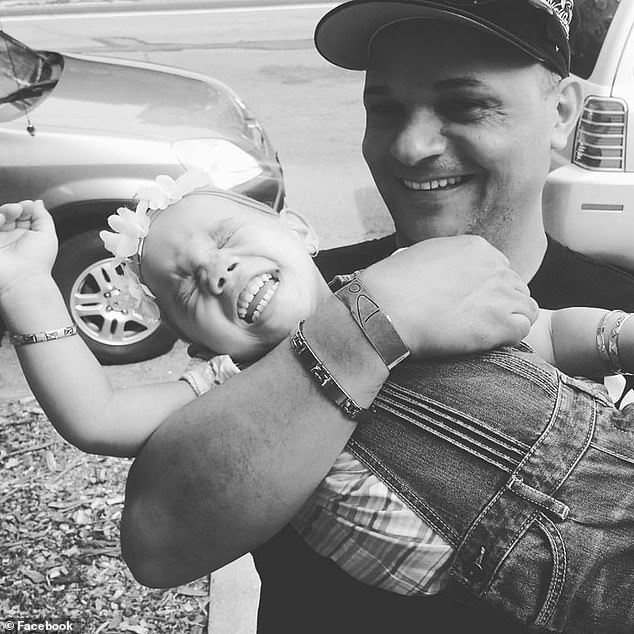 'He is not a bad person,' Caraballo said. 'I don't know what was going through his mind in that moment, but he's not like that. He loved this little girl' 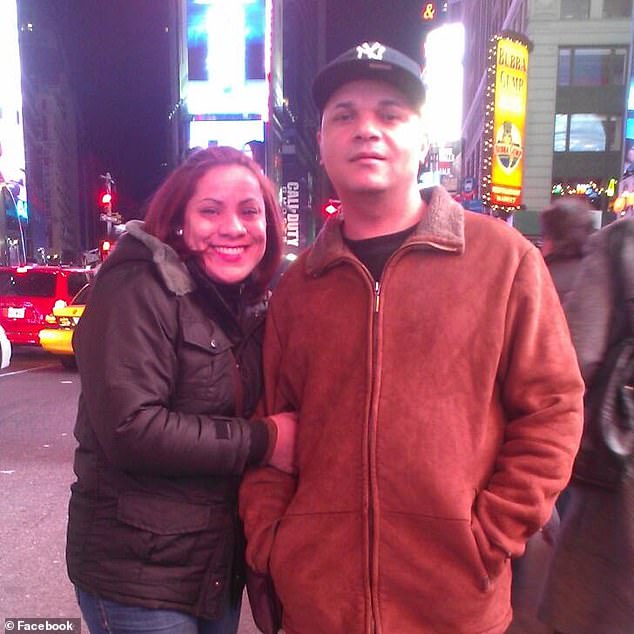 'It's not easy. It still hasn't sunk in. God give me strength,' Caraballo said hours after the incident Monday morning. She and Balbuena are pictured in an old Facebook photo 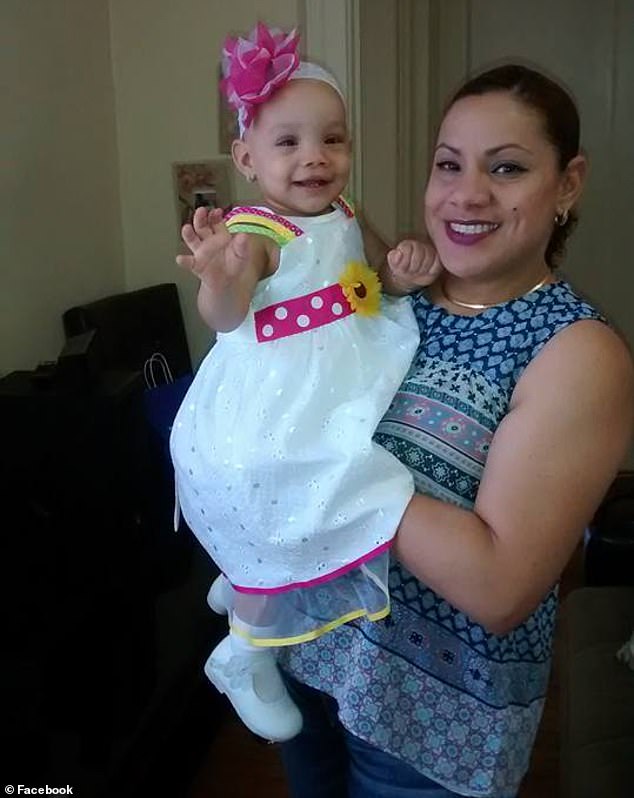 Balbuena was pronounced dead at the scene. Ferni was taken to Jacobi Medical Center and released with a clean bill of health hours later.

'Medically, thank God, everything is fine — she doesn't have any fractures,' Caraballo told the Daily News through a translator.

She described Balbuena as an 'angel' who was devoted to his children and struggled with depression.

'He is not a bad person,' Caraballo said. 'I don't know what was going through his mind in that moment, but he's not like that. He loved this little girl.'

She added: 'It's not easy. It still hasn't sunk in. God give me strength.'

New York police are currently investigating the incident and no further information was immediately available.

Comment by Sufferahsmusic Media Prod on September 26, 2019 at 9:38pm
Batty guh suk yuh madda you should a dead long time

Comment by mr1stroke on September 25, 2019 at 5:27pm
How about selfish and evil, wait lets blame it on Trump every idiots are running around with no brain, the media can tell them what ever they want so they can make them dumber

God was watching over this little girl Praise Jesus Amen

This just breaks my heart. Mental illness is on the rise and theres help out there and some people cry for it but dont know how to get it

Now anyone tell me that there is no god