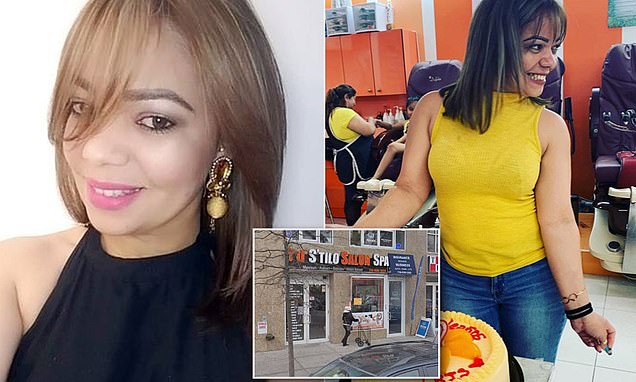 A husband allegedly stabbed his wife to death and then lay down and embraced her lifeless body at a Queens salon where she worked.

The woman, 35, who was identified as Iris Rodriguez, was working inside the Tu S’tilo Salon and Spa on 37th Avenue in Jackson Heights, Queens, at about 7 pm on Wednesday when her husband attacked her, police told the New York Daily News.

She was reportedly stabbed multiple times in the chest as her stunned co-workers looked on in horror, police told the news outlet. 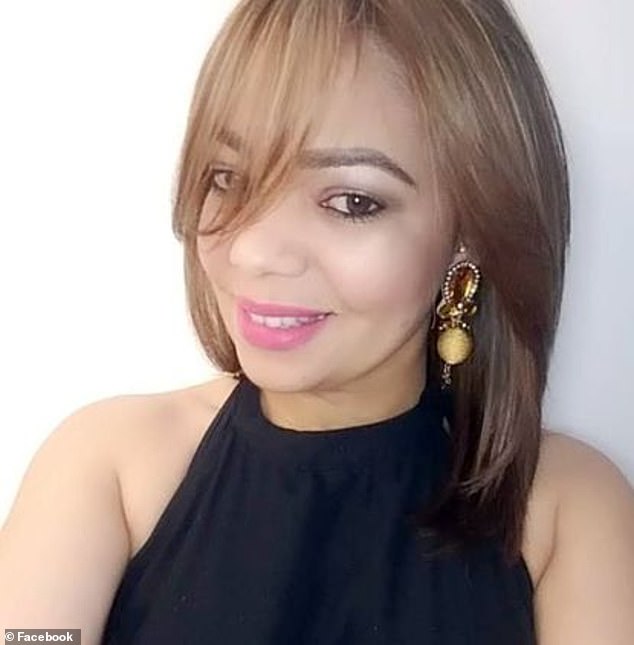 Iris Rodriguez, (pictured), was stabbed several times allegedly by her estranged husband who then lay down and embraced her at a Queens salon where she worked

Footage obtained by the Daily News showed her attacker lying on top of her as he can be heard whispering to her and crying, while onlookers scream in the background.

Rodriguez and her husband separated after about four years of marriage in January.

However he became jealous when he saw her talking to other men, a friend named Rosa told the Daily News.

He also had begun to call her after they split up. The friend revealed: 'She said that he was aggressive, and she was a little scared, but never enough to think this [would happen].

'Such a good person she was. A really good mother. She loved her children. She would do everything for them.' 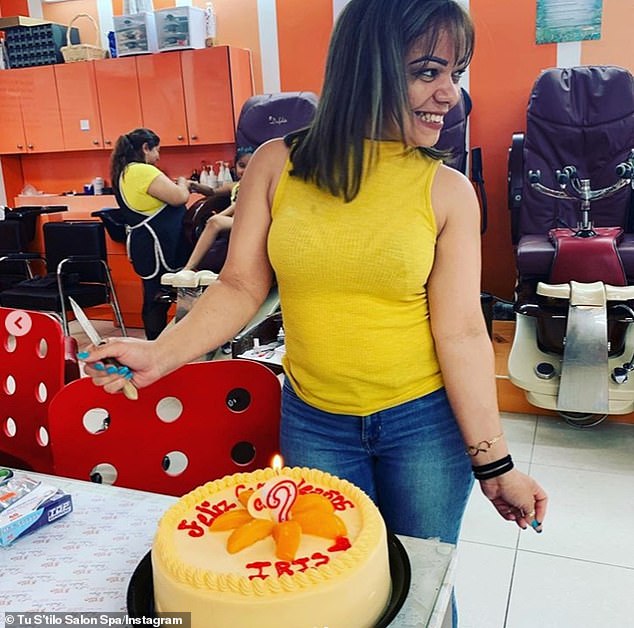 Iris Rodriguez, (pictured), is survived by two young sons, one who is eight and the other who is just a toddler 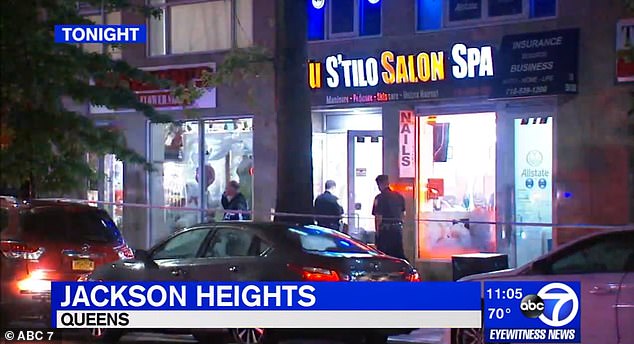 Police stand outside Tu S'tilo Salon and Spa, where Iris Rodriguez was killed by her husband 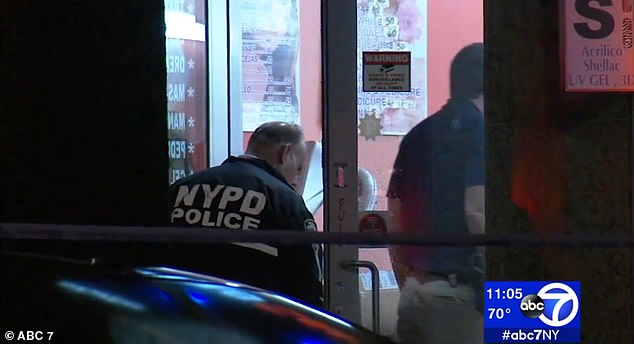 Officers in the salon saw the man lying on top of the body of his wife, where he began to weep 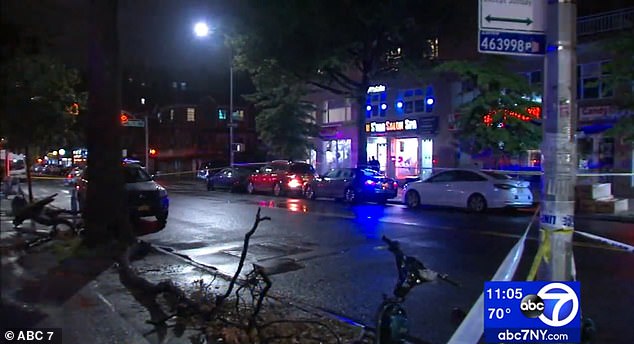 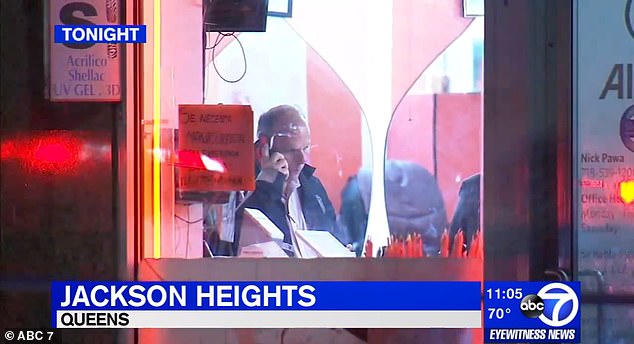 The man's name has not been released and charges against him are pending, according to police 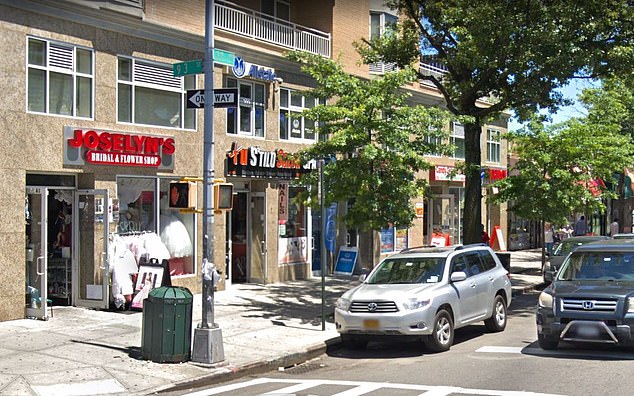 The woman, 35, who was identified as Iris Rodriguez, was working inside the Tu S’tilo Salon and Spa, (pictured), in Jackson Heights, Queens, at about 7 pm when her husband attacked her

Iris Rodriguez leaves behind two young sons, one who is eight and the other who is just a toddler.

'Dios mio!, a woman can be heard yelling in the background before officers remove him from on top of her body.

She was taken to Elmhurst General Hospital, but she tragically died.

Rodriquez worked on hair and make-up at the salon and her friend described her as a 'magnificent' person.

Police took the 39-year-old suspect into custody. He was also brought to Elmhurst hospital for treatment for a cut on his arm.

His name has not been released and charges against him are pending, according to police.

Very sad that this continues to happen when marriage is no longer acceptable and the woman wants out and moves on only to later be killed by her crazy ass coward of a husband. Evil just plain evil. And then for her co-workers not to gang up on him to help save this mothers life. Sadden by this killing and lord please comfort the children in spirit they are going to need all the support and love they can receive. This hateful unkind evil world grows dimmer each day. RIP beautiful lady.

These men need to know when to just back off and accept the word no. Now these babies will be heartbroken for life without there mother. Smh

Comment by Dana Baker on August 11, 2019 at 7:33pm
@Nexus This is true I'd rather just live for myself , help someone in trouble and be a hero and save someone . My adrenaline rushes be crazy at times !

Comment by Nancy Guzman on August 11, 2019 at 3:01pm
I would have picked up a frigging chair,a bottle of nail polish remover (Right in his eyes),there are way to many objects in a hair salon, that can be used as a weapon. It's just BS,that not one person there did just that.
They should all have JUMPED his A""!!!

Comment by Nexus on August 10, 2019 at 7:58pm
@Dana our society today are all too happy to live vicariously instead of doing something..smfh

Comment by mr1stroke on August 9, 2019 at 12:12pm
Dana Baker do you tealize when i comment i do not look for agreement or approval of others, because i was told to always be different in my own ways, so others may never see things the way i view life, so on that note as long its coming from a good place you just have to express it, somethings we cannot deny

Comment by Dana Baker on August 9, 2019 at 11:20am
@Mr1stroke I don't agree with a lot of the things you say on here so with what you're saying now I will have to strongly agree ! They were watching that being carried out and were able to record and not intervene ??? Are you kidding me !!! Scissors , razors , chairs , chemicals , curling irons , brooms, all kinds of weapons they could use and they only thing they could think of was a phone !!! I swear I feel like all hope is lost . She should have and could have been saved . May she R.I.P

PRAYING FOR THE CHILDREN. SELAH

Comment by Al3x on August 8, 2019 at 3:57pm
Agree once again. Things like that happen fast but it’s more salon workers verses that one man. I don’t get how anyone can stand there and watch “Im Horror”