A woman married her dog on live TV

The United Kingdom is going through tough times. Boris Johnson, a straw-haired charlatan whom Donald Trump called “Britain Trump,” has become prime minister via a long series of compounding national blunders, and the threat of a no-deal Brexit looms larger than ever. The U.S. women’s national soccer team put England’s best hope for a soccer world title in the trash. Piers Morgan still roams the streets with impunity.
So, on the one hand, we feel compelled to cut our friends across the Atlantic some slack. On the other hand? They got ladies marrying dogs on morning TV shows over there. 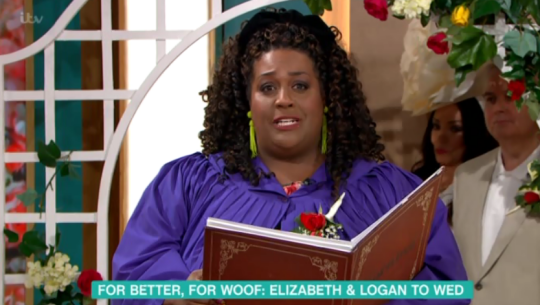 This clip comes from ITV’s This Morning, which is sort of like The Today Show if The Today Show had people marrying dogs. The bride is named Elizabeth Hoad, who said she’s suffered through four failed engagements. The groom is Logan, a golden retriever who we don’t have to tell you is a very good boy. The two walked down the aisle to a live rendition of Paul Anka’s “Puppy Love” from a former X-Factor contestant, the wedding was officiated by a Big Brothercontestant, and the best man was a Love Island winner. (British reality TV, it should be noted, has long since surpassed its American counterparts in absolute freakshow s***.)

There is, we must say, a lot to like here. The dog, of course, is wonderful, and looks absolutely stunning in that tuxedo. His wedding band is a great touch, too. The dog puns are solid, and many kudos to Elizabeth for rescuing Logan from an abusive home. All of this does not change the fact, however, that this is still a lady marrying her dog on a morning show.
In all, our ruling is that this is slightly more charming than creepy, but watch yourself, Britain. Don’t push it. At the very least, this is certainly far less upsetting than that time everyone from The Today Show dressed up like Peanutscharacters.

Lmfaoo@mr1stroke
When you see those females walking around with dogs...
I’m dying. Lollllll

This is absolutely stupid!

Comment by Pearls on August 2, 2019 at 5:20pm
What happens when he cheats on you by sniffing another girl’s (dogs) butt. LOL

Comment by mr1stroke on August 2, 2019 at 1:12am
Lol do people still get involve in call girls in 2019 when every chicks are online looking for sugar daddies, who does call girls lol thta havw to be some miserable dudes, get a woman or 2