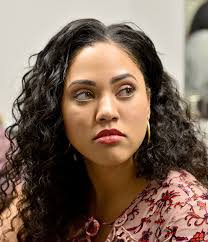 Ayesha Curry is back in the news today, this time for bashing the Black community - and saying that she was never accepted by Black people in America.

Ayesha appeared yesterday on the talk show The View, and half way through her interview, she started bashing Black people.

Ana Navarro asked NBA star Steph Curry's wife about growing up in Toronto and her being Jamaican/Chinese/Polish and Black.

She said that in Toronto people looked at her as Black but when she moved to North Carolina at age 14, things changed. Ayesha claims the Black community forced her to choose "Blackness" over her other ethnicities, and she felt uncomfortable.


According to Ayesha, she was not accepted by the Black community, and so she had to spend her teen years around many non-Black friends..

She told the View hosts that she wants the Black community to "accept all shades".

Many people on social media are taking offense to Ayesha's comments, saying that "light skinned" and biracial Blacks typically enjoy special "elite" status in the Black community. And they have trouble believing what Ayesha is saying.

The chef and entrepreneur discussed her difficulty fitting in while growing up with a diverse heritage on "The View" Friday morning. Her mother, Carol Alexander, is of Jamaican-Chinese descent while her father, John Alexander, is of African American and Polish descent. When she moved to the U.S. from Canada as a teenager with four different backgrounds to identify with, she was confronted by classmates who labeled each other more than she was used to when she lived in Toronto, she said.

Here's her on The View:

Ayesha Curry recently stopped by Jada Pinkett Smith's Red Table Talk interview series and said she frequently notices women paying lots of attention to her husband Steph. "I'm okay with it now," Curry told Smith. "Obviously you know the devil is a liar and the ladies will always be lurking, hoping for their moment and waiting, but I honestly hate it." Immediately after the interview went live, Ayesha was met with some backlash online.

Fans of the couple were critical of how she felt "insecure" over women "throwing themselves" at Steph, while she explained she doesn't have men doing the same to her. She responded to the discussions online with a lengthy Instagram post, adding that she has "never been one to cage" her feelings "to any capacity."

She's received a lot of support for what she said, too, and now her husband is among the chorus. On his Instagram Stories, the Warriors star wrote, "Proud of you for being authentic and putting yourself out there-not being afraid of the potential bullshit and nonsense that could and did come at you." He continued, "Way more positive than negative with all of this. Keep being you. I love you."
When the interview arrived, some believed it was a warning sign that their relationship wasn't as solid as it seemed, but now Steph seems to be putting those concerns to rest.

To be honest I don't think the ethnicity part should be her concern. I know it's her feelings and she has every right to them but to be overly concerned with one nationality in particular is not of importance. The reason why I say this is because there are people of every ethnicity that does not have anybody's best interest at hand including their own. If people cannot except you for who you are then don't stop being yourself because it won't change anything. Your complextion is going to be with you as long as you are on this earth. I say this as a person of mixed ethinicites. I got teased but you know what I just looked at it as tough love because it's the person inside of you that will make a difference and if people can't eventually get past that then you don't need to be around them anyway.

Comment by mr1stroke on June 23, 2019 at 7:01pm
When did you ever embrace the black community, most of those b****** these days will do anything to be with those white boys, as soon as a black man make ir than they want you

When are black folks gonna learn to keep their business at home and stop putting it all over the internet. This girl done opened a can of worms that should have never been opened.

Honestly, who the hell cares?