Jay-Z Empire Of The State Live Performance At Yankees Game Kerik will be forced to await his upcoming corruption trial behind bars. Judge Stephen Robinson found probable cause to believe he was in contempt of court and revoked his $500,000 bail.

His lawyers said they did not know if Kerik, who has been New York City's correction commissioner as well as police commissioner, had ever spent a night behind bars.

The judge said he could not find another way to keep Kerik, 54, from… Continue

UNRELEASED MICHAEL JACKSON SONG "THIS IS IT" 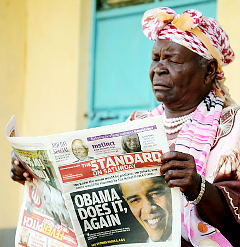 There was no victory lap. President Obama accepted the 2009 Nobel Peace Prize with humility yesterday to keep his shocking receipt of the world's most prestigious award from turning into a political hot potato.

Ordinarily, scoring so exalted a prize requires no damage control. But, Obama walked a fine line.

He acknowledged those who doubted whether he had earned it after less than a year in office, but he embraced the… Continue