Tweetybird has not received any gifts yet

SHORT FILM TO INSPIRE AT RISK YOUTHS NOT TO FALL PREY

On March 15, 2009, Reggie Bullock’s short film "A War For Your Soul" was independently released on the internet, and has catapulted as a “stirring, epic and inspirational” video for today’s generation”.

Over 1.5 million internet viewers have watched “A War For Your Soul” in seven months. This video was created to inspire young at-risk African-Americans not to fall prey to some of the… Continue

stella said…
Hello Peace to you,

I wish you and your family happy moments in life now and forever amen.Please, which has no formal relationship with you, but because of my present situation makes me circonstancies contact you.I have been suffering from cancer and has a leave.I short life to have the idea of donating my heritage 6.5 million for the disadvantaged, please help me to fulfill my last wish.
I hope to hear from you
Thank you

Good Day,
How is everything with you, I picked interest on you after going through your short profile and deemed it necessary to write you immediately. I have something very vital to disclose to you, but I found it difficult to express myself here, since it's a public site.Could you please get back to me on:( mrsstellakwale5888@gmail.com ) for the full details.
Have a nice day
Thanks God bless.
Mrs Stella.

Place yourself on the BABA ROOTS VIP List for Special Discounts every month! E-mail reggaeholics@gmail.com 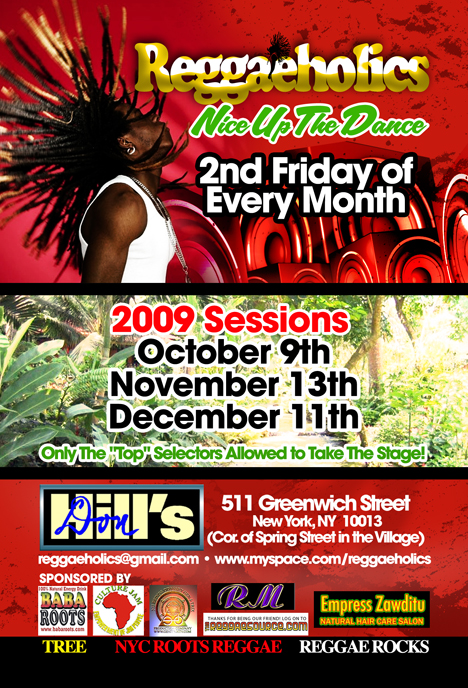 NAUTI SHORTI said…
CALLING ALL REGGAE MASSIVE FANS!! REAL REGGAE MUSIC PARTY IS COMING TO NEW YORK!! REGGAE REGGAE REGGAE FOR YOU!! 100% STRICTLY THE BEST FOR ALL THE REGGAEHOLICS!! 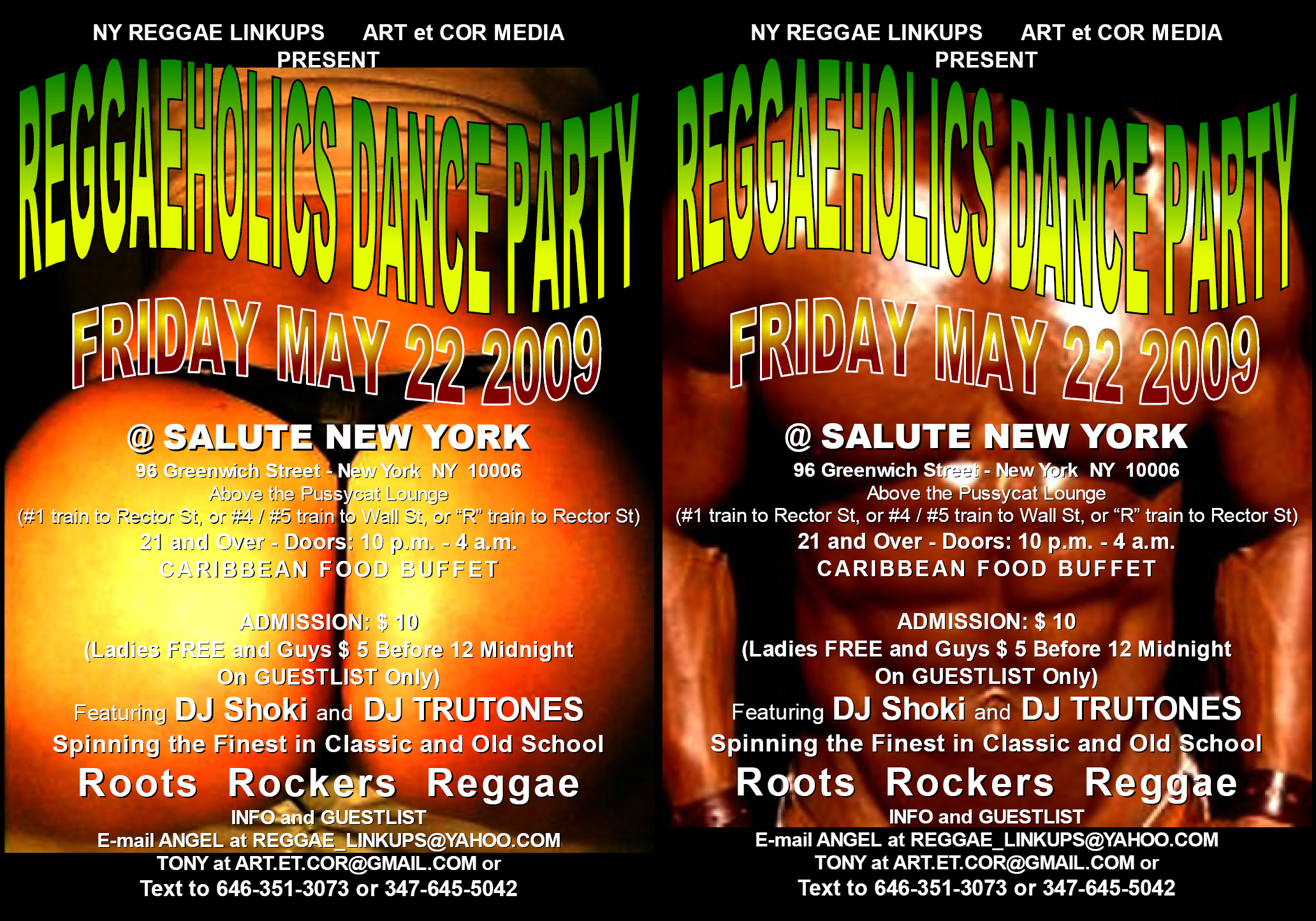 REGGAEHOLIC FRIDAYS IS BACK!!! NY REGGAE LINKUPS IS DOING IT AGAIN MAY 22ND, 2009!! FOR ALL YOU TRUE REGGAE LOVERS AND FANS WHO LOOKING FOR A REAL F*CKING STRICTLY THE BEST REGGAE PARTY IN NYC!!

WE CALLIN ALL DANCERS, MODEL CHICKS AND REGGAE FANS!! COME DANCE AND WINE UP YO SELVES ON THE DANCEFLOOR!! WE THE ONLY PARTY IN NYC PLAYING THE BEST REGGAE MUSIC LIKE YOU BACK HOME IN THE CARIBBEAN!! 100% REGGAE MUSIC PARTIES ARE IN DEMAND!! WE GIVING YOU WHAT YOU WANT!! STRICTLY THE BEST!! CARIBBEAN FOOD BUFFET 2!!

NO DRESS CODE, JUST CASUAL AND CHIC!! LADIES FREE AND MEN ONLY $5.00 VIA RSVP ON THE GUESTLIST ONLY B4 12!! YOU MUST RSVP TO GET YOUR TICKET TO THE BEST REGGAE RIDDIMS IN NY!! WE DON'T DISAPPOINT!! $10.00 ADMISSION ALL NITE!! DRINK SPECIALS, BOTTLE SERVICE SPECIALS, SPECIAL OCCASION VIPS!! ASK ABOUT OUR SPECIAL VIP!! BECOME A VIP AND DON'T WAIT IN THE LONG AZZ LINE!! GET VIP TREATMENT!! 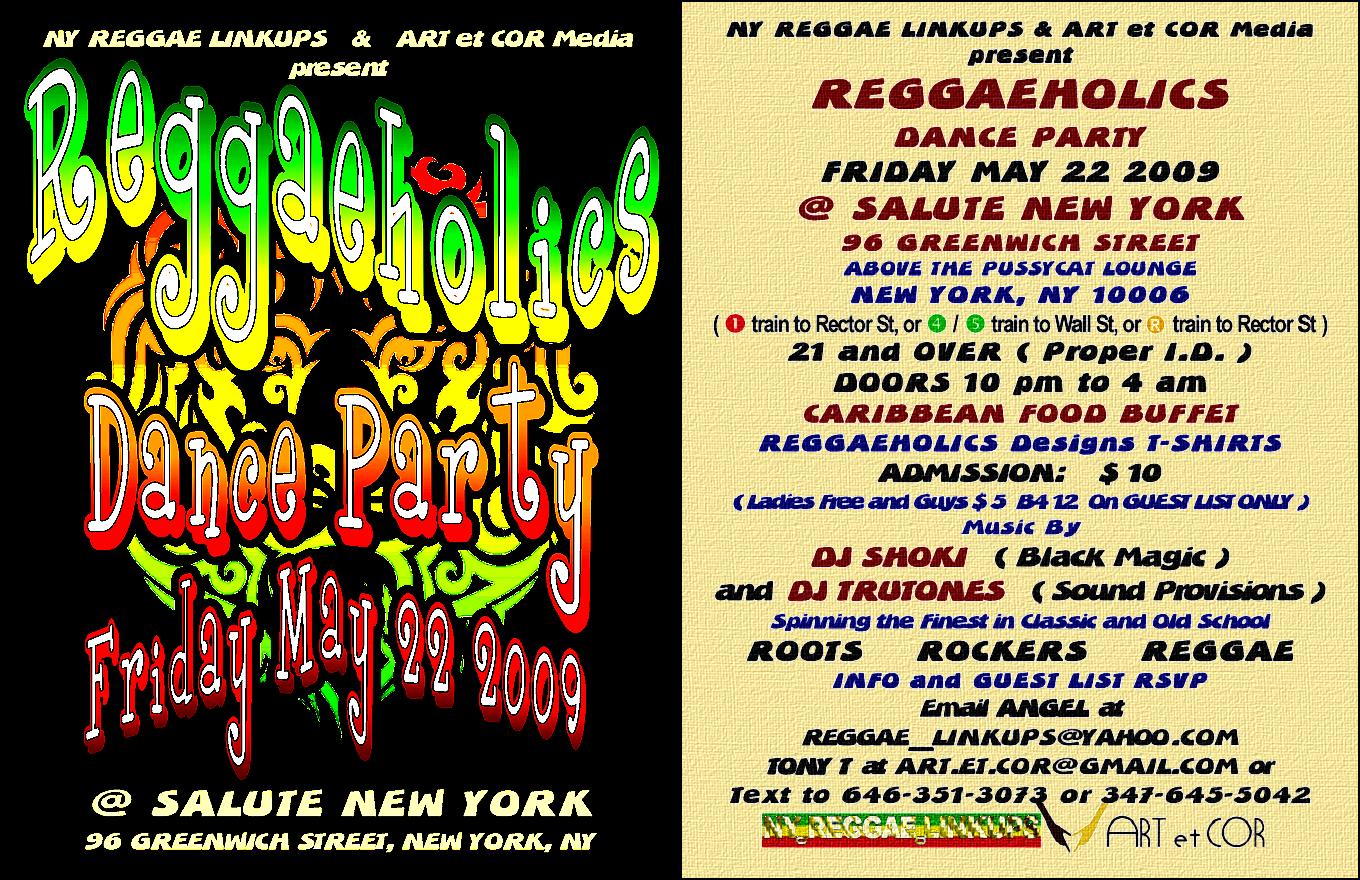 Black Gem said…
Hey Tweet. What's up? How have you been?

aSOCAholic said…
Montserrat stand up...lol how are you Tweety it was so nice to see you again we have to do it again soon.

VICTOR E LEWIS said…
how you doing? ope to see you in the city sometime soon...